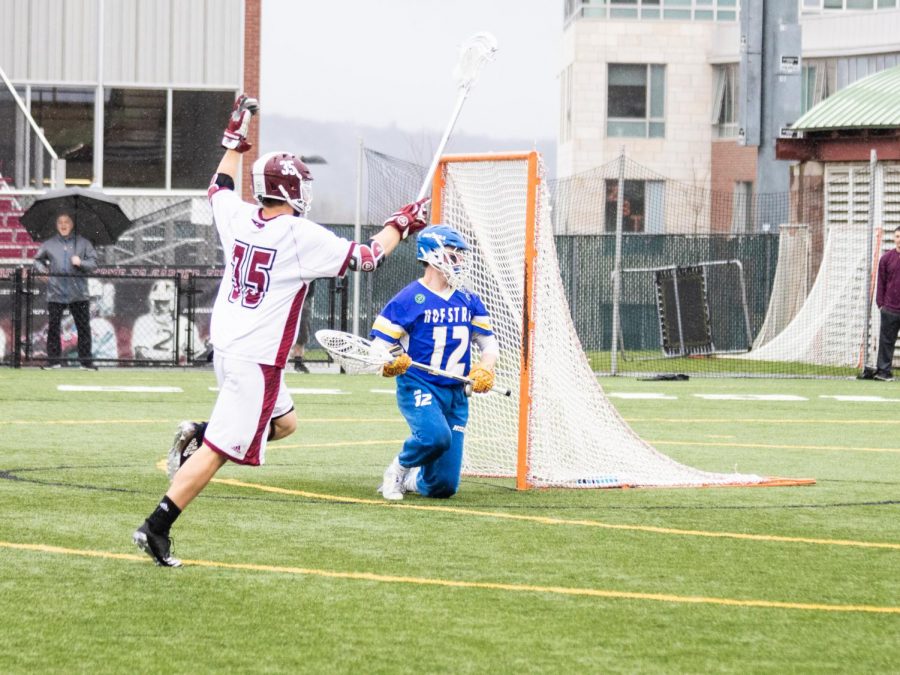 It was a close game for 15 minutes.

Then UMass scored 10 straight goals and well, it was all but over.

The Pride only slotted three more, allowing the Minutemen to preserve their perfect record in the Colonial Athletic Association with a 14-6 victory.

“I mean, we couldn’t really miss the net,” Carr said. “Billy (Philpott) was awesome, he had a hat-trick. Dan O’Brien had one (goal), Luc (Valenza) had one. We just kind of had that momentum where everything was going for us.”

Hofstra (6-7, 2-3 CAA) didn’t have many opportunities on the other end of the field with UMass dictating much of the pace but when it did, Minutemen goalkeeper Sean Sconone snuffed out each chance.

Finishing the contest with 14 saves, the junior kept UMass’ momentum going making timely saves to keep the Pride from getting any sort of confidence.

“Any time your goalie can save the ball, catch the ball and you want to get out and up on transition, that helps, obviously,” said Cannella.

“It’s like missed baskets in hoops, right. If the ball goes in it’s hard, you got to pass the ball in, you can’t really run. Missed baskets is sort of like a save or turnover, you can get running,” added Cannella. “So yeah Sean was able to do that again today which was great.”

Hofstra goalie Jack Concannon didn’t have as clean of an outing, stopping only 10 of the 24 Minutemen shots on goal.

“It was a great goalie we played today too and I don’t know he just wasn’t seeing the ball well but everything just seemed to be working,” said Carr.

The win secured UMass the top seed in the CAA tournament, which begins Thursday, May 3 at Garber Field. The championship game is scheduled for May 5 at 1 p.m.