These bleachers shouldn’t be this quiet

"The collegiate field is much more competitive across gender lines than society is ready to admit." 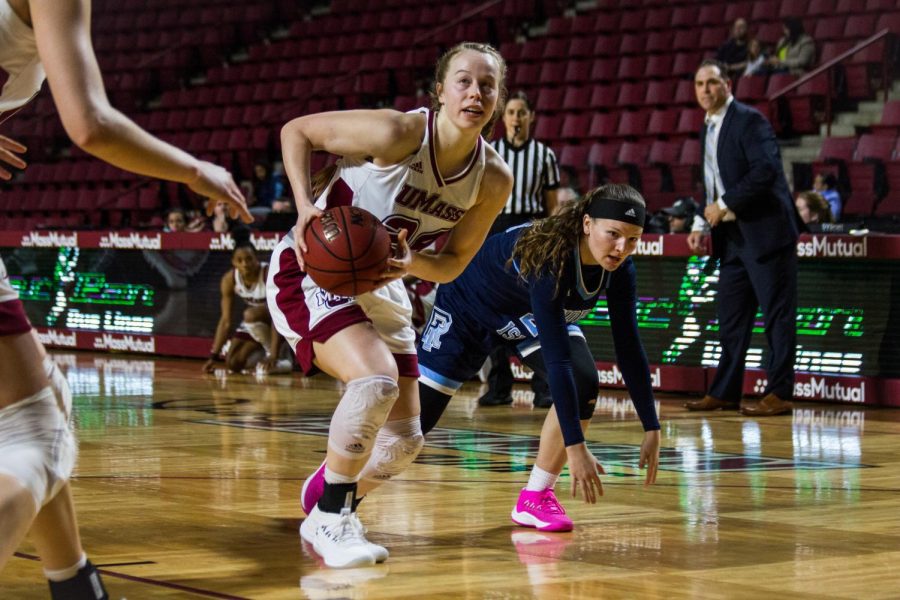 This semester, I’ve been covering University of Massachusetts athletics for the Daily Hampshire Gazette in my sports journalism class. When I started in January, I was a novice sports reporter, and I knew I faced a challenge that would teach me more about sports than I had ever learned as a fan. Because of my own preconceived notions, I imagined that most of my work would be in men’s sports. I wasn’t disappointed when I was randomly assigned to start with the women’s basketball beat, but it wasn’t what I expected. Looking back, I have very different images of sports than I did when I was a sports fan rather than a reporter.

I used to think of Tom Brady and LeBron James as the personifications of an athlete. And to some extent, I still do. It’s hard to deny the spotlight on men at the professional level, regardless of the reasons why. In contrast, the collegiate field is much more competitive across gender lines than society is ready to admit. University of Connecticut women’s basketball team is an obvious reason why. The team’s dominance is beyond historic. It overshadows other dynasties that exist in the pros – like the New England Patriots – or even Villanova’s current run in the mirror tournament.

I understand that one-sided games and predictable results aren’t the best way to draw interest to a league, and some even claim that UConn’s success is bad for women’s college basketball. Notably, this line of criticism has nothing to say about University of Alabama football or streaks of dominance in the NBA like the Golden State Warriors or San Antonio Spurs.

I couldn’t help but notice the inequity right here in Amherst while I was covering women’s sports on campus. I covered the Minutemen’s hockey playoff upset of the University of Vermont on March 1 at the Mullins Center. I’ve seen professional football games in person with less atmosphere and energy than the Minutemen generated that night. The historic comeback finish and overtime stunner will rightly be remembered as a vintage UMass sports moment.

Meanwhile, if women’s basketball had hosted the first round of the Atlantic 10 tournament and won a comparable game, there would have been open seats in the student section at the tip-off. The lack of student interest in the Minutewomen was borderline humiliating at times. When UMass hosted eventual A-10 No. 1 seed Dayton in the regular season this spring, my reporting partner and I were astounded to estimate about 30 fans in attendance, not including media and the band. It doesn’t feel like a basketball game when the bench is louder than the entire audience. I shouldn’t be able to hear the play calls as clearly as I can hear my colleagues in the press box. To be fair, some games were better attended than others based on scheduling, but no games I saw drew a large crowd – except for a field trip game when regional middle schools bussed in thousands of young fans. My limited coverage of the men’s basketball team felt completely different.

Why is this? What is it about women’s sports that isn’t winning over a male-dominated audience here on campus and across the country? I’ve found that two issues are behind this: a lack of quality sports media for women’s games, and discrimination against women perpetrated by men and women alike. I’m not innocent of this, not now, and certainly not six months ago. I filled out a men’s bracket and not a women’s bracket, and I admit I wouldn’t have watched the women’s national championship if UConn had been playing. Fortunately, I did, since Arike Ogunbowale’s 3-point dagger at the buzzer for Notre Dame was one of the most thrilling sports moments of the year.

What’s the difference between Ogunbowale’s shot and David Tyree’s catch or Malcolm Butler’s interception? Most sports fans never saw the shot, and the other two plays will live on in collective sports consciousness in a way that undermines the dreams of girls who want to subvert the expectations society has for them.

Give women’s sports another chance on campus and on television. It’s the right thing to do, but even if you really don’t care, watch it because home runs are equally exciting no matter who holds the bat.