Tibetan monks bless UMass through the creation of sand mandalas

Monks create a mandala symbolizing the Buddha of Compassion. 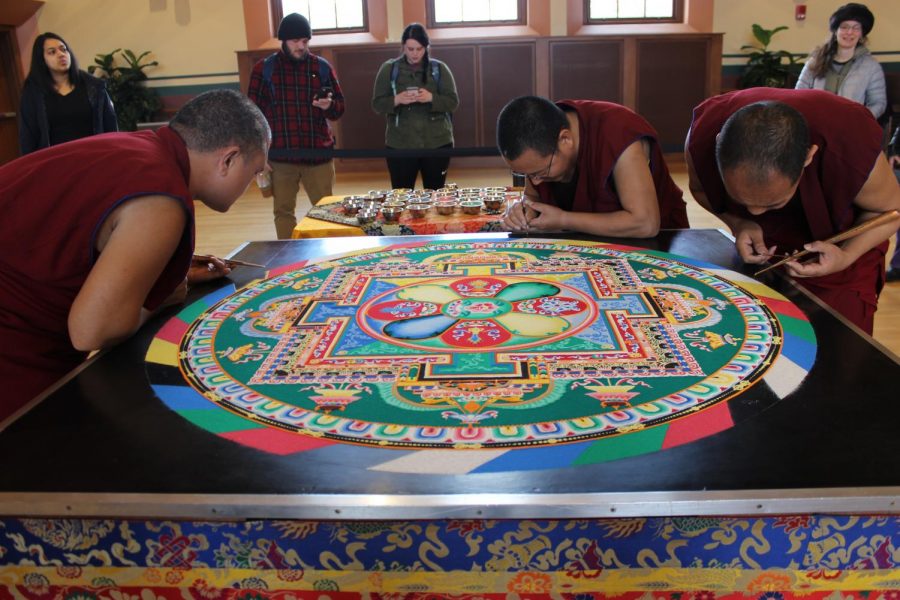 Tibetan monks from the Drepung Loseling Monastery came to the University of Massachusetts to begin creating sand mandalas in the Old Chapel on Tuesday, April 17.

Sand mandalas are formed from millions of grains of sand placed in intricate patterns using specialized tools, such as chak-purs, which are conically-shaped metal funnels that have ridges down the side.

For six to eight hours each day, these monks meticulously laid out each layer and color of sand into geometric shapes and ancient spiritual symbols.

There are hundreds of different types of mandalas, and they each represent a different form of the deity. The monks that came to UMass specialize in approximately 10 different forms of the sand mandalas. The mandalas they created here are called the Buddha of Compassion.

Geshe Rinchen, one of the monks, said, “The purpose of the sand mandala is to inspire people to be more compassionate because we believe that when we see the mandala Buddha of Compassion, it can bring a positive transformation in our life.”

Rinchen decided to become a monk at age 30 after being a shepherd in his village.

“It was just a calling, we say it’s karma. When I was young, I liked to be in the presence of monks. They would come to our village, do prayers, recite the mantras and one day I told my parents ‘I want to be a monk’ and they said, ‘Okay, go ahead.’ And that’s it,” Rinchen said.

He went to school for five years to learn how to create sand mandalas and received the title of Geshe, an academic degree for monks, at the Drepung Loseling Monastery.

Rinchen said that he decided to make mandalas because “a sand mandala is kind of an image we can see with our eyes, so for the meditation, for beginners, it’s hard to imaging that place, the palace [the land of the deity], so we need some way to see it. This helps us focus on it in an easy way. We apply this practice again and again, then after a while, we can imagine that palace without the mandala.”

Sand mandalas do not last forever. In a ceremonial procession, the monks methodically destroy the mandala shortly after it is created. They use a metallic tool to draw lines equidistant from each other from the outside to the center. Then, a monk uses a brush to sweep the sand in a specific pattern, destroying the detailed mandala.

“Before we destroy it, we do a prayer. We invite the deity here to stay in the mandala in his palace and to bless this whole area and to heal all negative influence. Then it’s time for it to leave because this is the world that we live in here, but we thank you for coming and blessing this place. Then our group leader goes to the mandala and destroys it…Then after we finish the prayer, all of the monks come to the mandala and collect all of the sands and put it in the small bags and give it to audience as blessings.”

Aishwarya Kaki, a junior finance major, works in the Old Chapel and had been following the creation of the mandala since the beginning.

“They’ve been working really hard for the past four days…it’s really interesting how they’re able to create something so beautiful by hand,” Kaki said. “It takes a lot of time to make and they’re extremely focused, so to see them work for six to eight hours a day is really cool.”

“I felt like I learned about being patient and being really focused on what I’m doing. They are able to concentrate on what they’re doing for so many hours and I’m here just trying to do my homework and I can’t concentrate so when you’re really focused, I see how much work can get done,” Kaki said.

Ranjanaa Devi, the director of Asian Arts and Culture Program for the Five Colleges, organized the event and brought the monks to UMass.

Devi explained this was the fifth time the monks had come to UMass. She then went on to talk about how the monastery that the monks live in used to be in Tibet, but is now in India after the Chinese takeover of Tibet.

“In Asian culture, cultural events and artistic events are not separate events like in the West. For us, religion and art has been intertwined for centuries so when you bring Buddhist culture here, you’re also bringing teachings and spirituality and at this point the world is so divisive, so students need to see beauty of spiritual teachings that have existed for thousands of years in Asia,” she said.

“I hope they will learn that these things exist and that we have such a go-go world, everything has to be fast. So, what I hope is that students take the time to contemplate their next action because in Buddhist tradition, the way you act is the way your next life will be. So, when you think before you act, you may not do or say things that you might have said that could be detrimental to your inner growth.”

On Friday, April 20, after the mandala was finished around 2 p.m., it was available to view until 4 p.m., when the destruction ceremony took place. The monks sang a prayer and then destroyed the mandala, representing the impermanence of life. After the mandala was destroyed, the prayer was concluded, the sand was gathered up and it was split in half. One half went into individual bags and was handed out as blessings to the crowd, while the other half was placed in a ceremonial jar and, after a short procession and prayer, was poured into the campus pond, as the monks believe it will find its way to the great ocean.

The monks, after four days at UMass, concluded their time here and will continue their tour across the Western world.

Miranda Senft can be reached at [email protected]