To cheer or not to cheer

Where does collegiate cheerleading stand in this divide? 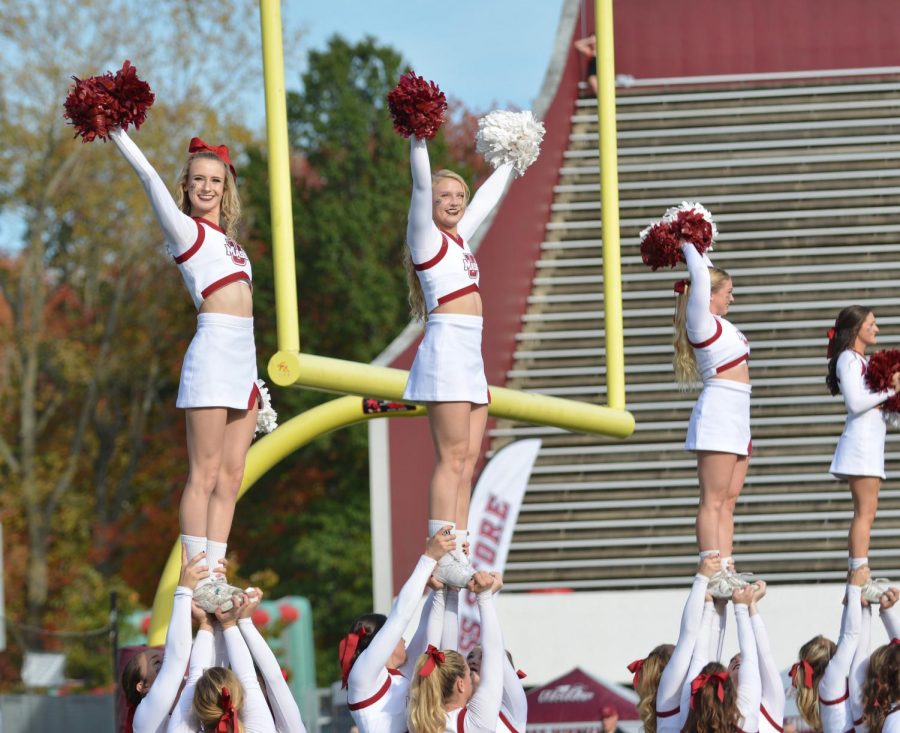 The domain of cheerleading stands at a crossroads. On one hand, six of the 32 teams in the National Football League have now disbanded their cheerleading squads, and with good reason; cheerleaders in the NFL are of little utility to the sport itself and are little more than mere eye candy, present to be ogled at by the male spectators. How else would one justify the provocative dressing and the swimsuit calendars? Visit the Philadelphia Eagles’ cheerleader webpage and you’ll see that there’s no looking past the push-up bras and the barely-there bottoms.

On the other hand, in 2016 the International Olympic Committee granted cheerleading provisional recognition as an Olympic event. This means that the sport will receive $25,000  annually from the committee to spend on the training of future Olympic athletes. This provisional recognition will last for a period of three years, after which cheerleading can petition to be officially included in the Olympic Games.

So, where does collegiate cheerleading stand in this divide?

Firstly, it’s important to draw a distinction between competitive collegiate cheerleading and what we routinely see in the NFL. While the latter essentially comprises of dance routines performed by scantily-clad women in glittery boots, competitive collegiate cheerleading could be more fittingly described as synchronized stuntmanship. The tumbling, jumps and stunts involved in the routines are athletically demanding. Moreover, cheerleading squads at tournaments are judged not on their outfits but on their technique, difficulty and synchronicity. Thus, I can see why the athletes stress on drawing this distinction. Moreover, if diving, rhythmic gymnastics and trampoline are Olympic sports, then I don’t see why the prospect of adding competitive cheerleading to the roster should summon skepticism.

Now, cheerleading in the NFL may be rooted in the objectification of women, but I do not push for the NFL to get rid of its cheerleaders simply because no women are coerced into this business. Rather, they enter this realm fully aware of what it entails. Who am I, then, to object to someone’s choice for a source of income? Collegiate cheerleading, however, has a responsibility to bear: It actively lays the groundwork upon which the International Olympic Committee will determine the future of the sport.

As I sat in the Mullins Center watching a basketball game, however, I noticed the University of Massachusetts cheerleaders equipped with pom-poms, yelling “Go White!” in a mostly deserted stadium. While they did briefly perform stunts in between the quarters, they were obviously restricted by the time constraints and the structure of the basketball game. Why are UMass cheerleaders dedicating their time and resources to cheer at athletic events? It’s clearly not to rally the crowds since the two sports that have cheerleaders at UMass — basketball and football — receive quite low attendance. In fact, men’s hockey, which attracts the largest crowds, does not have cheerleaders. If you’ve ever been to a hockey game, you know that what gets the crowd pumped is not pom-poms but the band, the dedicated hecklers and the announcer roaring “Mullins Maniacs, ON YOUR FEET!” Cheerleading is an independent sport and should not have to function as an accessory to other athletic events. Besides, by subscribing to the skirts, ribbons and pom-poms, the collegiate cheerleaders only add to the misconceived parallel drawn between them and the NFL dancers.

December 2019 is when the International Olympic Committee decides the fate of cheerleading as an Olympic event. If cheerleading wants to be taken seriously by the Committee, it must direct its entire focus on training athletes and not on cheering at other athletic events. In addition, keeping its place in the Olympics at sight, cheerleading should adopt gear that better facilitates athletic movement (for instance, shorts or tights instead of skirts and switching to materials like spandex which enable flexibility). This, I believe, could get cheerleading the recognition that it deserves at the 2024 Olympics.