UM Dance Team: between an RSO and a varsity sport

The team members are ‘like family’ to each other 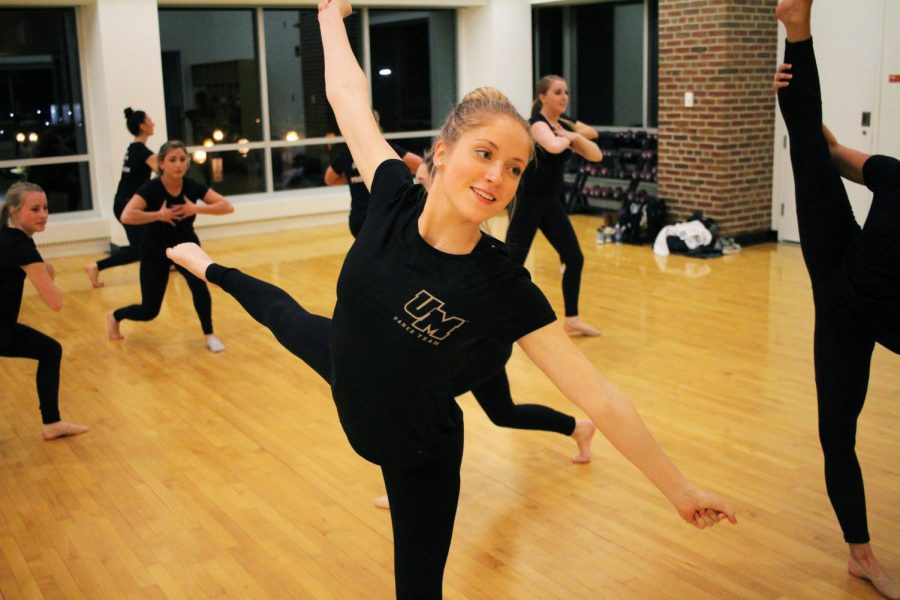 The University of Massachusetts Dance Team gathered on the second floor of the Recreation Center on Wednesday evening, March 21. If it weren’t for the matching uniforms, the approximately two dozen women in the room could have been mistaken for the attendees of a group fitness class.

However, UMass Dance Team members aren’t the attendees of any class; they are the members of an organization, an official Registered Student Organization that exists somewhere within the realm of student-run organizations, club sports and varsity sports.

Although they aren’t a varsity sport, the UMass Dance Team performs at football as well as men’s and women’s basketball games. The team operates without a coach. It’s an athletic organization with no affiliation to any college, department or major.

Justine Pennucci, a junior majoring in public health, serves as the team’s captain. Pennucci is responsible for organizing and running practices, choreographing routines and facilitating communication with campus officials, such as the athletic department.

“She is boss lady,” according to Paris Jamiel, a senior majoring in microbiology. Jamiel is the team’s financial captain, overseeing the budget, fundraising and the logistics for the team’s annual trip to Daytona Beach, Florida to compete in the National Dance Alliance’s College Nationals.

Pennucci and Jamiel described the process of qualifying for Nationals, which begins in August the preceding year. To qualify for the 2018 Nationals, which occur from April 4 to 8, the team attended a three-day camp at Boston University in August 2017 sponsored by the NDA. It was there that the team had their strongest performance in five years, allowing them to receive a “Gold Bid” and qualify for Nationals. The Dance Team also earned additional perks, including a decreased cost of attendance of the competition and priority in performance time.

“Teams compete based off their football team, so we competed in Division I three years ago…We weren’t always competing on the highest level. Now, we are,” Pernucci said. Since the NCAA separates Division I into two categories, Football Bowl Division and Football Championship Division, UMass football’s move into FBS resulted in the team’s move from Division I to Division IA at Nationals.

Jamiel said, “We go to Nationals and we get so much recognition, so much respect from other people because they’re genuinely, like, how do you do this without funding, without a coach…people are amazed when they see us.”

“But that’s just part of it – that’s why we say all of the hardships, all of the responsibility, all of the times that you feel so defeated that you don’t know if you can even go forth, going to Nationals and getting that recognition that we get and working as hard as we possibly can, walking off that floor, it just feels so amazing to have done all of this.” Pennucci said.

“And all those times you were crying because you were so frustrated, it’s all worth it at the end, because you’re there, you did it, you worked as hard as you possibly could,” she continued, expressing her pride of every team member.

According to Pennucci, the team hires a choreographer to help prepare the two-minute routine for Nationals because it differs drastically from their short, crowd-pleasing performances at athletic games.

Jamiel said, “The second our syllabi for second semester come out, the first thing I do is, like, ‘Alright, what am I missing the week of Daytona?’ and I email my teachers.”

According to Pennucci and Jamiel, academics are highly valued on the team. “I’ve found with dancers they tend to be very good students because dance is such a disciplined sport, and you get very good at time management, like most athletics in general,” Jamiel said.

Members are in a wide variety of majors across campus, including biology, communications, communication disorders, education, kinesiology, microbiology and public health, in addition to being involved in other organizations, like sororities and the integrated concentration in science.

She continued, “We spend enough time together for these girls to be like family to me.”

According to Pennucci and Jamiel, the team’s success depends on the strong foundation of friendship and respect among its members. They described the team as “dynamic.”

“It’s definitely a unique program to be involved in,” Penucci said. “It gives you a purpose and a place on campus.”

According to Jamiel, the transition from one captain to the next is seamless. “It’s always kind of been unanimous…in a team like ours, in a group setting, you are together so much you know who’s second in line. People rise up to that leadership role… naturally.”

For this student-run organization, they hope to reach the point where they’re no longer running their own show. Pennucci said, “I would say the end goal is to be a fully-funded varsity sport.”

“I know Nationals is going to be my last time dancing, like really dancing,” Jamiel said, “I have no plans of joining another team, so, as a senior, this is something I’ve spent my whole life doing, and I’m glad I get to leave it with them.”

Taylor McCormack, a senior majoring in education and psychology, will be competing at Nationals for the fourth time. “Dance Team made my college career,” McCormack said.

McCormack and Emily Mackey, a senior majoring in communication disorders, stressed the important connections they’ve made through the Dance Team, where they’ve developed incredible friendships that have made UMass feel smaller.

McKenzie Plaza, a sophomore majoring in communication, talked about the Dance Team’s impact on her transition to college. From the moment she stepped foot on campus, Plaza had friends through the team, older students to turn for advice on academics and the chance to continue dancing.

Mackay summed up her college experience by saying, “When I think of UMass, I think of Dance Team.”

Editor’s Note: Since this article’s publishing, it has been corrected to specify that the University of Massachusetts Dance Team competes on the Division IA, not Division I, level.

Elizabeth Wallace can be reached at [email protected] followed on Twitter @ER_Wallace.