UMass drops three games below .500 for first time since March 10 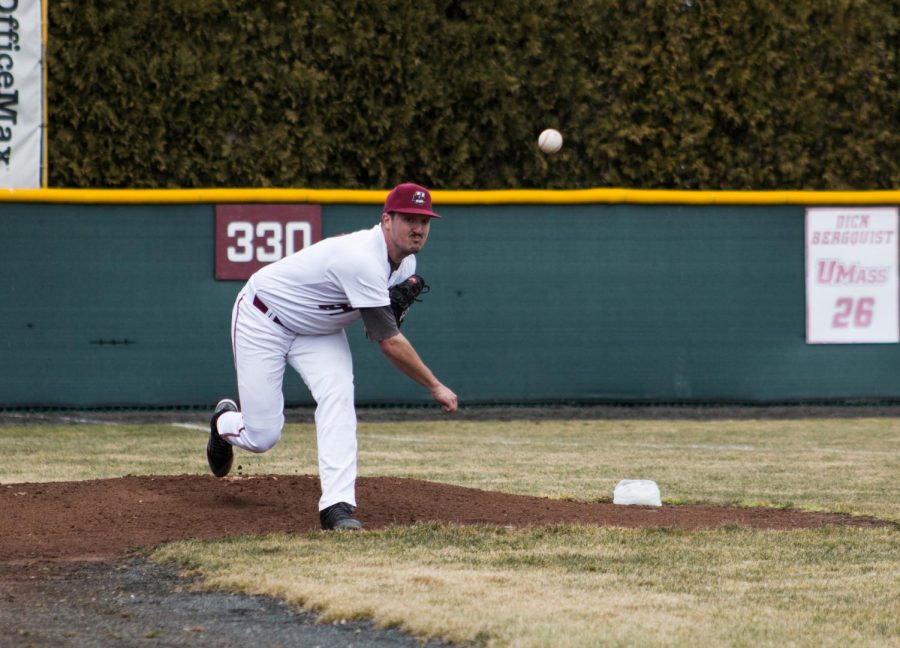 Scuffling starters and quiet bats doomed the Massachusetts baseball team over the weekend, as the Minutemen were swept by Saint Louis to extend their losing streak to six games.

“We’ve really got to expect a little bit more of ourselves,” coach Matt Reynolds said. “Our standards need to get a little bit higher as far as how cleanly we’re going to play the game, how tough our at-bats are going to be, getting ahead of hitters on the mound — really, every aspect.”

UMass starting pitchers gave up most of the damage, charged with 19 runs and all three losses. The Minutemen didn’t hold a lead all weekend, facing multiple-run deficits by the fourth inning in all three games.

Justin Lasko, at the top of the rotation, gave up six runs in six innings on Friday afternoon. In the other two games, neither starter made it past the fourth inning.

“We’ve got to do a better job of getting ahead of hitters,” Reynolds said. “We fell behind in counts a lot, and we’d occasionally slip in just a four-pitch walk out of nowhere. We let them hit in advantage counts far too often, and they took care of business. Whenever they had an opportunity, for the most part, they capitalized on it.”

On the flip side, the Minutemen’s bullpen held up over the weekend. After blowing a 7-2 lead against Northeastern mid-week, UMass relievers were quietly efficient against Saint Louis, combining to allow just four runs despite having to pitch nearly half of the team’s innings.

Facing yet another early deficit in Sunday’s game, late-game relievers Casey Aubin and Carter Knapek came in earlier than usual and combined for four shutout innings.

“So far, those guys have been back-end-of-the-game guys, trying to secure a win,” Reynolds said. “But you’ve also got to be ahead for them to assume that role. So we certainly weren’t going to go the entire weekend without using those guys. They’re two of our better arms.”

At the plate, the Minutemen hit a combined .194 over the weekend, with most of their offense coming in Saturday’s slugfest. Facing a strong SLU pitching staff, UMass managed only 19 hits to go with 32 strikeouts.

The lone bright spot was second baseman Eddy Hart, who hit a double and two solo home runs. Although held without a hit in Sunday’s game, Hart drew a walk in the fourth inning to extend his reached-base streak to seven games.

“He’s got a nice, simple approach, and I’m hoping some of the other guys in the lineup take notice,” Reynolds said. “He’s really been our offensive leader, in my mind, as far as the approach he takes to the plate. So I’m not surprised to see him have success. I wish more guys would kind of follow his lead a little bit.”

With Sunday’s loss, UMass dropped three games below .500 for the first time since the opening weekend of the season. Saint Louis finished the weekend atop the A-10.

“We needed to be near perfect, and we just weren’t, in all facets,” Reynolds said. “I don’t think we played really poorly, but we certainly didn’t play well enough to beat a very good Saint Louis team who also played very well.”

Looking to snap its losing streak, UMass will go on the road to face Boston College on Tuesday before starting a nine-game homestand against UMass Lowell Wednesday afternoon.

Thomas Haines can be reached at [email protected] followed on Twitter @thainessports.