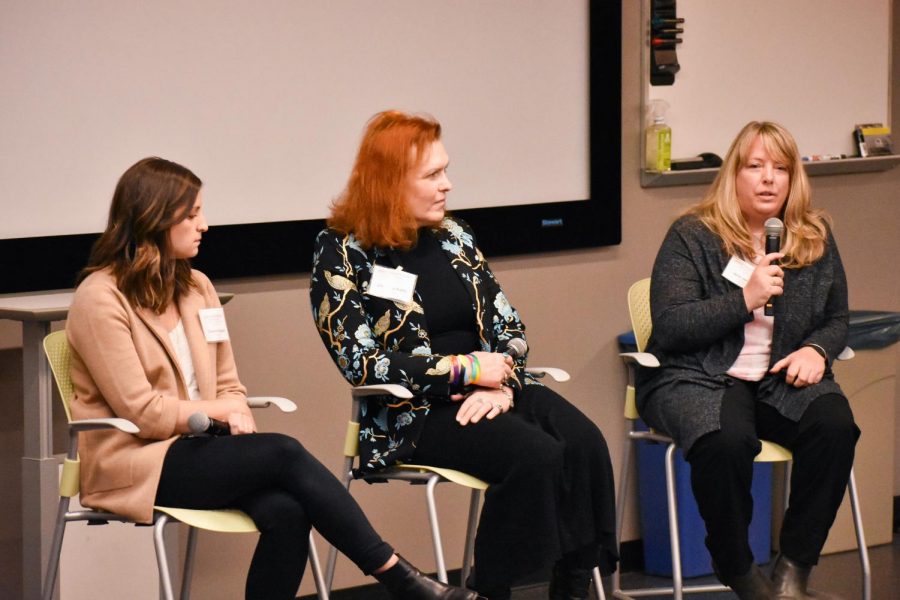 The second annual Women in Sports Media Symposium was held Friday, with speakers addressing some of the challenges they’ve faced as women in a male-dominated industry.

The symposium was held in Integrative Learning Center in a collaboration between the UMass  Journalism Department, the UMass Department of Communication, Women for UMass and the Mark H. McCormack Department of Sport Management.

Approximately 50 students attended Potts’ presentation on her experiences with sexual assault and how it affected her later work raising awareness for victims. 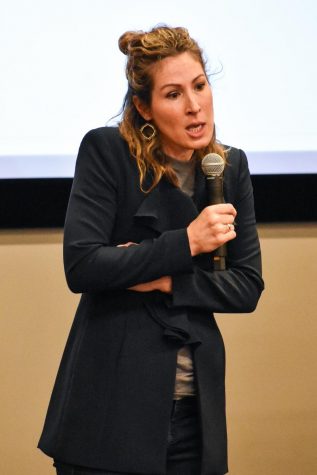 Potts spoke personally about her attempted rape in Italy several years ago. After fighting off her attacker and jumping from a sixth story balcony, she fled to the American embassy and pressed charges. She later wrote a narrative about the experience in Marie Claire, an online international fashion magazine.

Potts described how this has fueled her advocacy work and how she has sought to change the way rape and sexual assault are described in media and journalism. She expressed frustration over the dilution of words used by journalists to describe rape.

“At what point do they get to call you a rapist?” she asked, referring to the tendency of newspapers to fail to use that word even when someone has been convicted of the crime.

Potts sought to spread her message to everyone of all genders.

“I’m an advocate for men, women, boys and girls,” she said. “Sexual violence does not see gender.”

This message evolved into the main theme of the latter half of her talk. Potts noted repeated examples—including instances regarding former Michigan State University and U.S. Gymnastics doctor Larry Nassar—where articles simplified the crime or shifted focus away from the criminal involved.

“You can murder your wife, and you’re not even in the lead of an AP story,” she said.

The symposium was also attended by students from Commerce High School in Springfield. High school senior Tre’ana Taylor said that her class had been studying “women standing up to what they believe in” and that they had taken a field trip to see the day’s speakers.

Matt described her experience working as sports editor for The Massachusetts Daily Collegian. At the time, Matt was the only woman writing for that section.

“I was really isolated in that I had no other female peers,” she said. 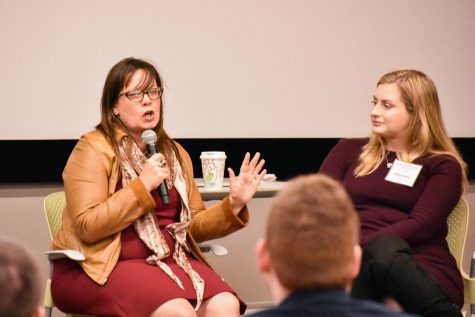 Despite this difficulty, she said she enjoyed helping her fellow writers develop their skills.

Matt also brought up the idea that sports journalism can be used to write about a larger idea, saying, “You get the opportunity to talk about race and confront rape. You get to do it through this really cool platform of ‘Who won the game?’”

Like Potts, Matt discussed the challenges that women face in their day-to-day lives. She recalled covering a UMass football game where another school’s media relations representative had tracked her around the stadium to prevent her from interviewing coaches and athletes. Matt remembered fearing that if it came to it, he would physically try to prevent her from doing her job.

She further brought up issues women face in professional environment and the pattern of not being able to get their ideas across to domineering male colleagues.

“Shut up, and let them get in a complete sentence,” she said.

The final session of the morning featured a panel of women working for ESPN, which included Cristina Daglas, a deputy editor at ESPN.com and sports journalism professor at UMass, Christina Kahrl, who covers Major League Baseball and is an editor for ESPN.com, and Jena Janovy, a senior deputy editor overseeing the domestic digital enterprise unit for ESPN Digital & Print Media.

The three continued the discussion of problems they’ve encountered as women in sports media and what people can do to overcome these challenges.

She also said that writers need to be able to ask difficult questions regarding uncomfortable topics, referring to recent reports by Sports Illustrated of widespread sexual misconduct in the Dallas Mavericks’ organization.

Janovy reiterated Potts’ earlier message of the problems in sports media going beyond something just women deal with and pushed the point that solving the issues will require widespread efforts.

“It’s not just about women,” she said “It’s about all of us. It’s about respect and dignity and safety.”

The final member of the panel, Kahrl, spoke personally about seeing sex-based discrimination from multiple perspectives. As a transgender woman, she spoke of “having seen life on both sides of this particular issue” and mentioned a pattern that women face of being talked over and having the floor taken from them.

“It’s something that routinely happens, and you just have to say, ‘No, actually I wasn’t finished here,’” Kahrl said. 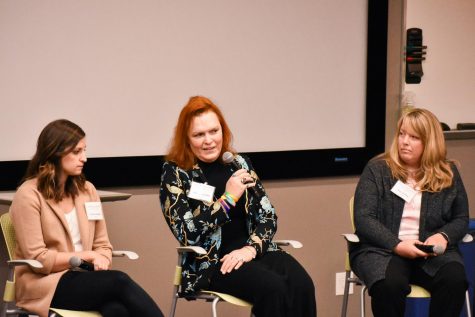 Following a lunch, the symposium featured the day’s second keynote speaker, McGlade. Her talk was followed by a rising UMass sports journalism alumni panel before a networking and advice workshop.