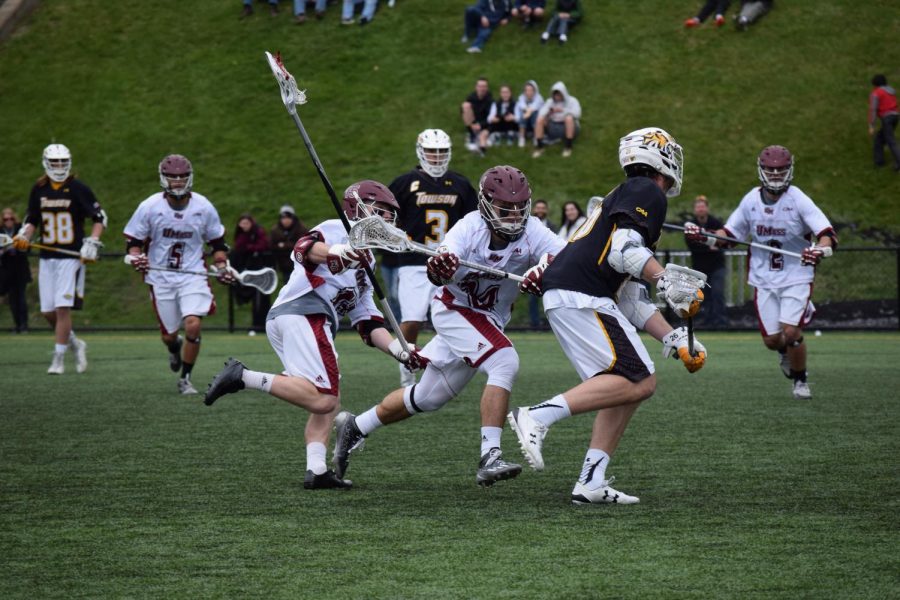 The Tigers (4-6, 1-1 CAA) enter the matchup coming off a resounding 17-9 win over Drexel last weekend, which UMass narrowly defeated two weeks ago in a victory that granted head coach Greg Cannella his 200th career win since taking over the program in 1994.

As winners of six straight, the Minutemen will need a complete effort from top to bottom to continue their current hot streak, as well as a first half that features more offensive intensity than what was displayed in last weekend’s second-half comeback over Delaware on the road.

However, with 129 goals to date on the season, a statistic that leads the conference, UMass should have no trouble coming out firing on all cylinders in front of its hometown crowd, especially against a foe as highly respected as the Tigers.

“It’s going to take a concerted effort from everyone,” Cannella said following Wednesday’s practice. “You’re going to have to persevere. There’s going to be a lot of ups and downs, it’s going to be physical, a lot to battle. We’re not expecting anything less than that—a battle.”

Towson, winner of three consecutive CAA titles, will certainly be ready for battle when it arrives for the weekend showdown, a testament that Cannella wholeheartedly agreed with.

“They’re very strong in a lot of different spots, some changes on offense, but defensively a great scheme,” he said. “They’re going to be well-coached, and they’re going to be flying around the field. They’re big, they’re athletic, they’re strong, so it’s going to be a tough game.”

Cannella also emphasized one of the Tigers’ unique tendencies in the offensive zone, noting their deliberate approach when cycling the ball in a direct effort to slow down the pace of the game and play at the tempo that suits them best.

To combat that style of play in the defensive end, the Minutemen will look to close defenseman and tri-captain Isaac Paparo to disallow Towson from running at will, something the junior has done exceptionally well in his three years with the program.

Through 11 games this season, the 5-foot-7, 170-pounder from Connecticut holds the most caused turnovers among active Minutemen with 19 and the second-most ground balls with 31, as well as seven points on two goals.

“[Paparo] has been that way since day one,” Cannella said. “He plays defense, but he secretly wants to play offense. He has a great sense for the transition game and getting up field. He’s well skilled and gets himself open in good spots.”

As for the UMass netminder on Saturday, Canella would not divulge whether Hampton Brannon or Sean Sconone will get the start when the whistle blows to signal the game’s opening faceoff.

Brannon has been the go-to guy in net for the Minutemen thus far, getting the nod in seven straight games, until the freshman let up four goals on four shots and was pulled for Sconone just 22 minutes into the action of last weekend’s matchup at Delaware.

In the remainder of the contest, Sconone accumulated 12 saves and allowed four goals, which helped put UMass on the comeback trail en route to its fourth quarter victory.

Opening faceoff on Saturday is set for 1 p.m. at Garber Field in Amherst.