UMass men’s lacrosse up against Hofstra in season finale 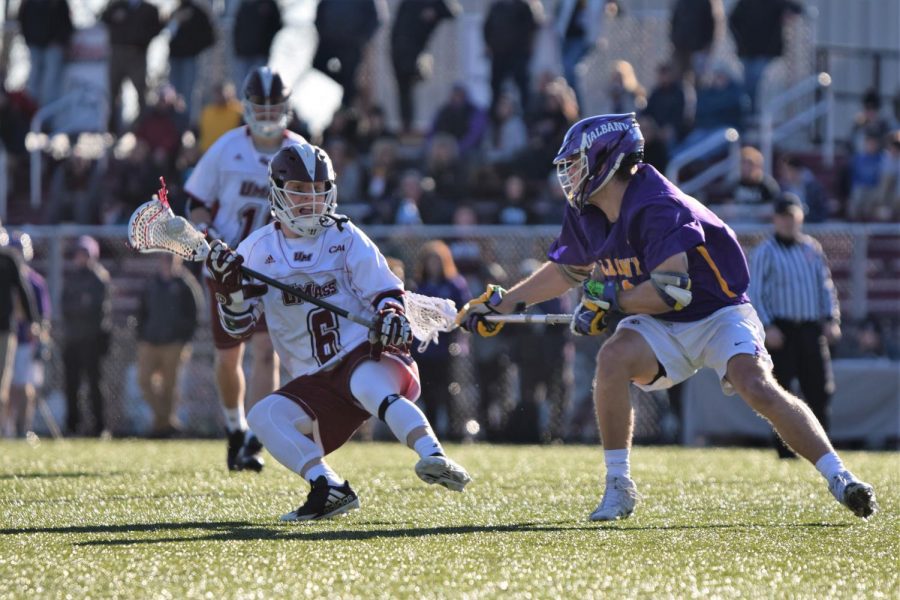 After claiming the Colonial Athletic Association regular season championship on the coattails of its eighth straight win last weekend, the Massachusetts men’s lacrosse team looks to solidify its stretch of regular season dominance with a win over Hofstra in the season finale on Friday.

The Pride (6-6-0, 2-2 CAA) enter the culminating matchup with a .500 conference record, tied for second in the standings with Delaware and Towson, and look to earn their spot in the fast-approaching CAA playoffs with a win over red-hot UMass (9-4-0, 4-0 CAA) on the road.

Although the Minutemen have already clinched the top seed with their win over Fairfield last weekend, Friday’s matchup remains one of great importance, UMass coach Greg Cannella said.

To add fuel to the fire, Friday’s contest is the first rematch between the two teams since they last met in the 2017 CAA Semifinal game, which saw the Minutemen cut the Pride’s hopeful season short on a buzzer-beating goal from 35 yards out.

When asked if he expects Hofstra to use that defeat as extra motivation to get the win and secure a spot in impending postseason play, Canella said, “Absolutely.”

UMass got out to a slow start against Fairfield, but thanks to the stellar play of junior goaltender Sean Sconone, who collected 20 saves through 58:15 in the cage — the most by any Minutemen goaltender since 2009 —  it kept its unbeaten streak alive.

Sconone, who sat behind freshman goalie Hampton Brannon for a majority of the season, has started in the cage for the last two games, allowing only seven goals with 29 saves along the way.

For his efforts, the New York native was named to the United States Intercollegiate Lacrosse Team of the Week, as well as the CAA Co-Player of the Week.

“He’s still on his way,” Cannella said of Sconone’s progress. “This journey doesn’t end until the season is over, so we hope that he continues to take advantage of it, works very hard, pushes himself and pushes his teammates.”

Freshman attackman Chris Connolly also made headlines for his play over the weekend when he was named CAA Rookie of the Week for the fourth time this season, thanks to the five assists he dished in the title-clinching, come-from-behind win.

Through 13 appearances on the season, Connolly has consistently produced on the UMass attack—which leads the CAA in goals per game—registering at least one point in each.

“[Connolly] just has great composure, and with composure comes confidence” Cannella said. “The guys that are confident in themselves and their abilities and are composed, those are the ones that can be consistent. [Connolly] has those qualities and we’re very happy about it.”

Faceoff is set for 5 p.m. at Garber Field, which doubles as Senior Day for the Minutemen.