UMass Ph.D. student discusses his life as a Syrian refugee

A personal experience of a Syrian refugee 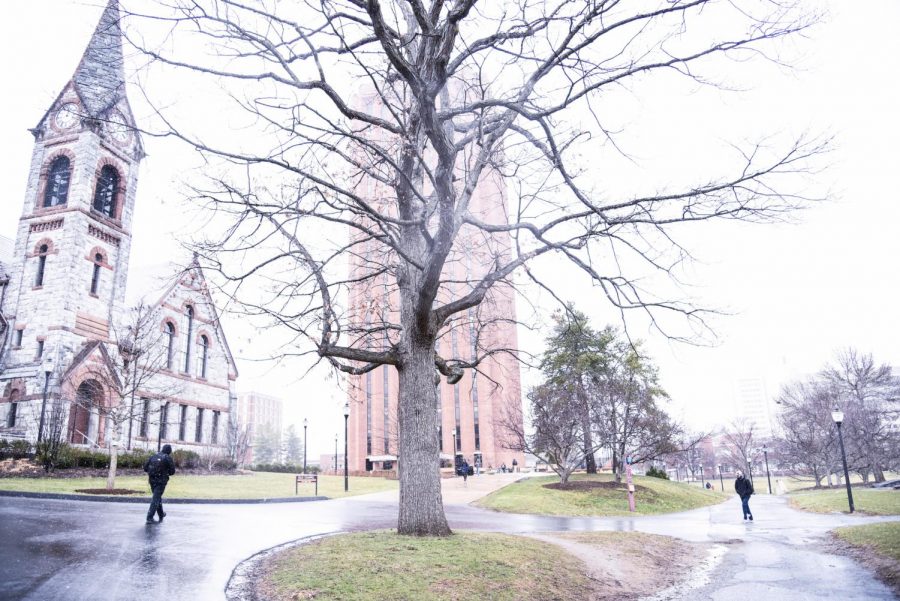 Before the Arab Spring and the outbreak of the civil war in Syria, Basileus Zeno had been pursuing a Ph.D. in classical archaeology at the University of Damascus. Zeno’s interest in archeology began during his childhood when he was growing up in As-Suwayda, a city in Southern Syria, that was surrounded by archeological ruins.

“My playground was temples,” Zeno said.

Basileus (Basil) Zeno came to the University of Massachusetts to work on his Ph.D. in the fall of 2015, after receiving a master’s degree in political science from Ohio University. As a Ph.D., Zeno has served as a teacher’s assistant in several courses in the political science department.

Zeno was working on his dissertation when the Arab Spring began, with the first uprising in Syria taking place on March 15, 2011. At the time, Zeno was working primarily at a museum, collecting data, while also working as a freelance writer on the side. Zeno described himself as a “writer who supported the uprising against the Assad regime.”

As violence and the civil war began to engulf the country, Zeno began to think about leaving. His wife, who was studying in Istanbul at the time, had been offered a scholarship to study at Ohio University. As the museums were evacuated and civil war began to breakout on the streets outside of his apartment, Zeno realized it was time to go.

Where he once lived is now a military zone.

After immigrating to the United States in 2012 and obtaining a J2 work permit, Zeno worked for six months at Chipotle. Even though he was now in the United States, the struggle continued as he tried to make a life and help other family members immigrate to the U.S.

“The immigration policy is very frustrating in the U.S.,” Zeno said. Syrian refugees, Iraqi asylees and others undergo an incredibly invasive interrogation process.

Zeno said that, while the visa system was not perfect under Obama, it has deteriorated further under Trump. Zeno warned that “a sort of fallacy [exists] that the immigration system was perfect before Trump was elected.”  Zeno experienced this first-hand when his brother was caught in the 2016 travel ban.

When describing the immigration system, he described it as a racist system, in which those who are not white have a much harder time immigrating.

“They treat everyone as liars, as potential terrorists. They treat the norm as the exception,” Zeno said when describing the long interrogation processes that Syrian refugees and asylees go through.

Zeno described how “it didn’t take long [to stereotype Syrians]…all of the sudden the whole community is just labeled as terrorists.”

At the time, his brother had been working for the International Migration Organization, where his job had been to interview refugees who were to be resettled in Canada. Right before he was about to board his flight, he was stopped and made unable to enter the U.S. In addition to still being stuck in a state of uncertainty, Zeno’s brother lost thousands of dollars, and “was treated like a terrorist at the airport.” Although he eventually made it to the United States, he experienced more difficulties.

Zeno’s brother is not the only one who has been separated from his family. There are countless stories like his, stories that do not have a “happy ending” in which the family is reunited. And even when the families do reunite, a level of trauma remains.

“In December 2017, for the first time, his kid acknowledged his presence — [as his dad and] not as a stranger,” Zeno said, when talking about the emotionally difficult journey his brother went through and is still going through of trying to build a relationship with his two-year old son.

“This is one of the invisible wounds,” Zeno described. “My brother even thought about going back because his kid refused his existence…this emotional reconnection, as kids are growing up, is incredibly difficult.”

Fortunately, for Zeno and other refugees, smartphones have allowed him to remain in contact with his family, which is now spread throughout the world. His sister is in the Congo, and his brother is in the United States.

But even technology cannot bridge the gap of a physical connection with family, Zeno explained.

“Not seeing my family for six years isn’t easy,” Zeno said. “We can’t celebrate the eve of the New Year together, or celebrate birthdays, or even cry together…so we have our own virtual reality together by using smartphones…it’s the only way we can stay connected.”

For Zeno, these invisible wounds have affected people he knows who are still in Syria. He described how he has “heard from many Syrians that they are afraid of eating fish from [the] Mediterranean because they are sure that they might be eating their fellow citizens because the fish were eating the dead bodies.”

Today, in Amherst, Zeno spends much of his time helping to run the website, Jadaliyya, which reports on issues in the Middle East. Rather than sending journalists to cover issues there, those who live there or have fled Syria, write about what’s going on in Syria.

“The website,” Zeno said,  seeks to show “the nuances of everyday life,” and to “get their daily experiences heard.”

Zeno mentioned that he was “personally frustrated with how Syria is being covered by the media and activists.”

“People who stay are being framed as ‘pro regime,’” but Zeno countered this is an unfair misperception.

“Some people would rather die in their own country than to leave,” Zeno added.

He went on to explain that, even if you chose to leave, it is only the first of many difficult choices. When his brother, who was a geologist working on oil refiners in Erbil, the capital of Iraqi Kurdistan, called and asked him how to and whether he should leave, Zeno didn’t know what to say.

“I have no advice,” Zeno told his brother. “Going through the Mediterranean, you might die and you might live. It’s 50/50.”

“The other option, is that you might not see your kids for years,” Zeno added.

Today, Zeno’s parents are his only family members that remain in Syria.

After the 2016 presidential election, Zeno says he was “absolutely traumatized.” After having lived for four years in the United States in a period of uncertainty, the results of the election made him feel even more unsure about what his life might look like.

“The waiting process is basically creating a sense of uncertainty about life…and that won’t be healed,” Zeno said when asked about his experience with the immigration process. He further discussed what it feels like not to know what might happen to you and the scars and unhealed wounds that that leaves.

After beginning the asylum process in 2013, Zeno is still pending asylum, awaiting a decision about his life and future in the States.

“You reach a point, where it’s just like please deny my case…just give me a decision,” Zeno said when describing how torturous being in the middle of the asylum process—and waiting for a decision about your future—is. He compared the inability to travel to being in prison.

When asked to describe Zeno, assistant professor of political science Timothy Pachirat said that Zeno is  “just an extraordinary, extraordinary human being.”

“Upon meeting him,” Pachirat stated, “I knew I was meeting someone who was just extremely extraordinary.”

Alexandria Nylen, a Ph.D. candidate who has worked alongside Zeno for the last two years, agreed with Pachirat’s sentiments.

“Basileus is an extraordinary human being and is just delightful and amiable. He is a brilliant academic mind,” Nylen said.

Zeno has been a teacher’s assistant for Professor Pachirat’s “Introduction to Comparative Politics Course” for the last few years. In that class, Zeno has given a talk about his own experience of “becoming a refuge.” Pachirat described the times Zeno has given his talk as “of the defining moments of the course.”

When asked about why Pachirat thought it would be a good opportunity to have Zeno share his story, Pachirat explained that, for students, hearing Zeno’s story “would be a way for them to see, in the story of a single person how these broad histories and politics have had an impact on individual lives.”

Nylen agreed, and further elaborated, saying that “a personal story that just cuts through the big institutions and shows the human lived experience is just really important…it helps to bring everything into context… and allows us to connect on a human level to relay process the immense human costs that the crisis in Syria has caused.”

“Students were lined up in the aisles, in tears waiting to shake his hand, to talk to him and to ask how they can could get involved and help,” Pachirat said.

Pachirat also stated that “The world is currently set up in such a way to create zones of life and zones of death…and those zones are often so thick…that we don’t have any idea about what the texture of people’s lives in the other places looks like. Basileus’ story allows us to close the gap between the two zones.”

“His story forces us to confront our own complicity and responsibilities in the way the world currently is,” Pachirat added, “to see the way anti-refugee rhetoric is occurring in the U.S.”

Zeno said that he encourages “people to move beyond numbers” and to “question the very quantification of people as lumped in one group without any nuances.”

Zeno also urged people not to be ashamed of their privilege.

“I hope if you are privileged, acknowledge this privilege and use it for something more meaningful; it’s not shameful,” he said. “Sometimes we have to step outside of our lives and look into the world.”

Kalia Hoechstetter can be reached at [email protected]