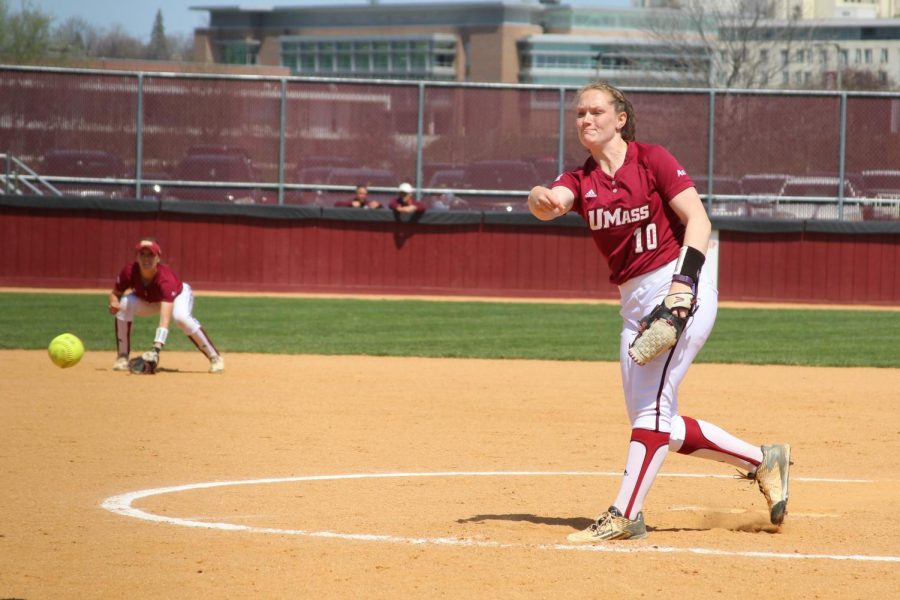 The Massachusetts softball team’s ultimate goal this season remains an Atlantic 10 championship, but the Minutewomen will take a brief detour from the conference schedule as Albany comes to town on Thursday.

The lack of conference implications doesn’t make the mid-week matchup any less important, as UMass (17-10, 6-0 A-10) looks to bolster its case for a potential at-large NCAA Tournament bid down the road.

“I think it’s a great regional matchup for us,” said UMass coach Kristi Stefanoni. “I’ve been following them since the season started, knowing that I’d make a schedule with a lot of different opponents from the America East, the American, the ACC, knowing that I wanted to play a tough regional, out-of-conference game. I think it’s a good, competitive opportunity for us to just get better before we play St. Joe’s over the weekend.”

The Minutewomen currently sit a respectable 74th in the NCAA’s RPI rankings — based on quality wins and strength of schedule, not just record — and won’t be using Thursday as an opportunity to tinker with the lineup or try something new, as Stefanoni won’t be changing a thing.

“I just got done telling them that I’m not going to do that, that this game means as much to me as a conference game,” Stefanoni said. “I plan on really trying to wreak havoc in the region. In the past, the gateway to the NCAA Tournament was to win the conference tournament. We have positioned ourselves really nicely in the RPI, and if we continue to play the game the way that we’re playing, we’re just going to continue to climb the ladder.

“So these midweek games, these regional opponents and out-of-conference, I consider them just as important because that’s what’s helping us climb in the RPI.”

The Great Danes (14-8, 2-1 America East) are led by Kelly Spear and Sarah Petzold at the plate, both of whom are hitting over .300 this season. Petzold is Albany’s best run-producer, with 15 runs batted in while slugging .491, both team-highs.

“We went through their hitting scout,” senior Meg Colleran said. “It seems like they’ve got a couple of pretty strong lefties in the middle of their lineup, and in the nine spot a slapper that seems pretty touch-and-go, she bunts a lot. I think as long as we keep her off base, and handle those power hitters in the middle, we’ll be pretty successful.”

Celeste Verdolivo has been Albany’s go-to starter this season and she’s been quite successful, posting a 6-2 record with a 1.80 earned run average and holding opposing hitters to a sub .200 batting average.

On the flip side, UMass has been electric offensively this season, hitting over .300 as a team and racking up a league-high 56 runs through six conference games, 16 more than any other team in as many contests.

UMass is playing its best softball of the year, and Thursday’s non-conference contest is a chance to keep the ball rolling.

“I think that we can definitely handle them,” said shortstop Kaitlyn Stavinoha. “I think we’re the better team, if we keep playing like we’ve been playing, we’ll be just fine. Like coach said, it’s a good matchup for us mid-week, we can get a good win in the region.”

Senior Jena Cozza has parlayed her stellar preseason performance into conference dominance, hitting .476 with two homers and 11 RBIs through six games in A-10 play.

Cozza was rewarded for her efforts over the weekend, as she was named A-10 Player of the Week after destroying George Washington’s pitching staff in a three-game set in Washington, D.C.

Cozza went 5-for-12 at the dish with seven RBIs and a pair of long balls, including a go-ahead solo shot in extra innings to lead the Minutewomen to a win in the opener, and a grand slam to cap off a 15-0 UMass blowout in the finale.

It’s the second weekly honor of the year for a player that Stefanoni called “the most feared hitter” in the conference. Her 1.024 slugging percentage is third in the nation, as the fifth-year third baseman has saved her very best for last.

She’s been the best hitter in the A-10’s best offense, and will look to lead UMass to four more wins this weekend, with Thursday’s matchup with Albany and a weekend series with Saint Joseph’s.