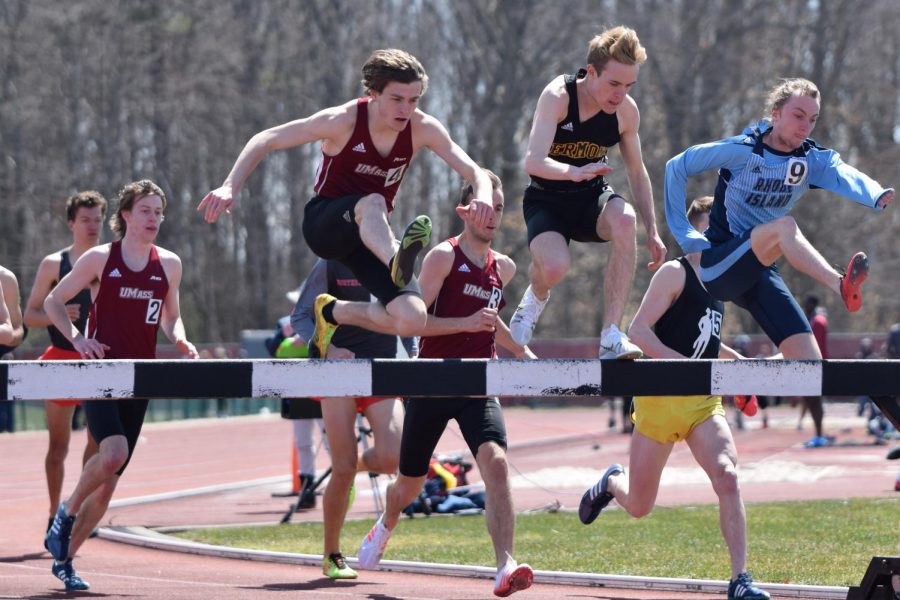 The Massachusetts men’s and women’s track and field teams opened their spring seasons at home on Saturday, with both teams taking first against Northeastern, Rhode Island, Vermont and Bryant.

The Minuteman Invitational marked the first competition for either team in over a month, providing an early jumping off point as both the men and women keep their eyes set on the Atlantic 10 Championships next month.

The meet was the first race since Dec. 2 for the Minutewomen’s Heather MacLean. The redshirt senior opened up a seven-second lead on her competition in the 3,000-meter steeplechase in the first 200 meters, before coasting to a New England qualifying mark of 10:27. Following her in second place was teammate Colleen Sands in 11:12.

UMass sophomore Lindsay Witt notched three first places on the day, including two individual victories in the 100 meters (12.01) and 200 meters (25.30). She was also featured on the Minutewomen 4×100 meter relay team, which took first in 48.55.

The Minutewomen were equally dominant in the 100-meter hurdles, led by Jada Harris in 14.05.

In the field events, throwing coach John Napolitano looked to return his team to competition form, beginning with freshman Danielle Notarfrancesco, who he said had taken time off to rest after late season competition during indoor track.

“Coming off of indoor, she’s going to need a little more time to ramp back up,” Napolitano said. Notarfrancesco still led the pack in the shot put, taking first place with a throw of 13.85 meters.

Napolitano also mentioned senior Lucy Belt, who took first in the javelin throwing into strong winds. Belt was not on the team for the indoor season, but Napolitano still believes she can place on the podium at the A-10 Championships in a month.

On the men’s side, there were similar new additions to the team. Sam Downes, a redshirt senior and graduate student, played baseball at St. Lawrence before coming to UMass on a grad transfer. He placed fifth in the javelin, throwing 50.78 meters.

“For having never thrown at a track meet in his entire life, he handled himself pretty well,” Napolitano said.

Winning the javelin was junior John Long at 60.75 meters.

The Minutemen placed four runners in the 400 meters, taking second through fifth, led by junior Jonathan Collins in 51.86. After a strong indoor season in the 60-meter hurdles, junior Jake DeGrace stepped up in distance to the 400-meter hurdles, and won in 56.22. Also sprinting for the Minutemen, Hayden Gray won the 100 meters, running 10.87 with the wind at his back.

UMass placed strongly in long distance events, taking first, third and fifth place in the 3,000-meter steeplechase. Dawson Bathgate led the pack in 9:22, and was followed by teammates Eric Waterman (9:29) and Erik Engstrom (9:35).

In the field events, the Minutemen continued their success, placing in the top three spots in the pole vault. They were led by Mason Lord and John Chuma, who both cleared 4.55 meters. UMass also took first places in the triple jump, where Nathan Adeyemi marked 13.91 meters, and in the long jump, where Myles McDermott hit 6.72 meters.

The Minutemen and Minutewomen will be back in action later this week, where both teams will split between the SCSU Multi Meet and the Ocean State Meet, both on Friday and Saturday.

Will Katcher can be reached at [email protected] followed on Twitter at @will_katcher.