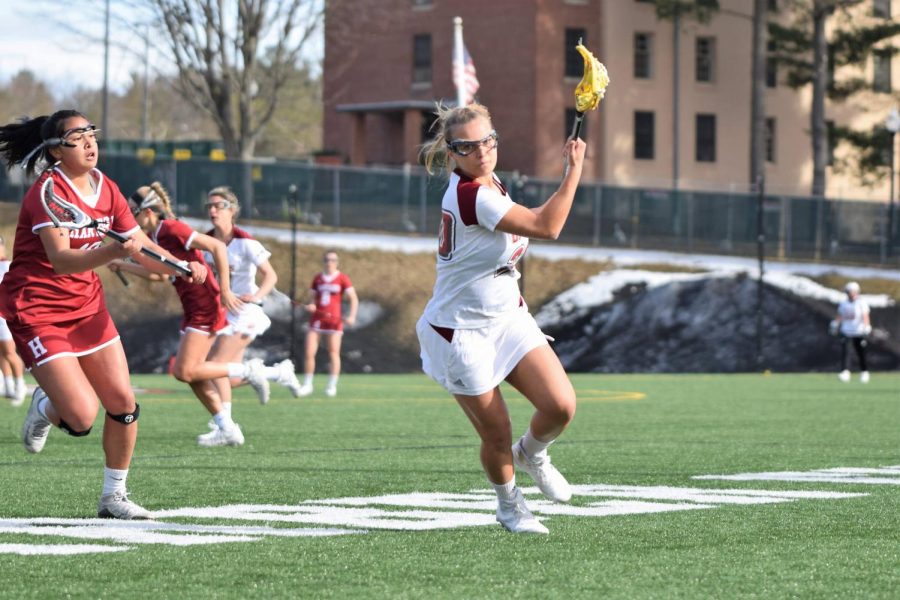 On Friday, the Massachusetts women’s lacrosse team will host St. Bonaventure for its third Atlantic 10 conference game this season.

After dominating both Saint Joseph’s and Davidson by double digits, UMass has a chance to extend its winning streak to four games. This is an opportunity to create the longest winning streak of the season.

On the other side, St. Bonaventure will enter Garber Field searching for their first victory of their season.

Coach Angela McMahon saw something new in her players over the prior stretch that she wants to replicate against St. Bonaventure this week.

“It [was] each individual person doing their job but all doing it at the same time,” McMahon said. “I think we were really locked in individually and collectively. Before we have had a lot of different people stepping up in different situations, but not necessarily at the same time.”

This is a team that came into the season with 13 new players and a sign of improved teamwork: timing. As the Minutewomen work to combine their individual skills and effort, they see results, such as in their first half shutout last Thursday.

Goalkeeper Lauren Hiller has kept opponents to under 12 goals per game with a .418 save percentage. She has been the backbone of a solid UMass defense, which boasts a 79 percent clear rate and 123 caused turnovers. Coach McMahon attributes this to strategic team play and aggression while the ball is in the air.

The Minutewomen will go into Friday’s game against a winless opponent with momentum, yet coaches have conveyed a strong message of working toward continuous improvement and home pride. There is little talk about wins, losses or records.

“In every game our focus has been on doing what we need to do to improve continuously each time we’re out there,” said McMahon. “I think it’s about both individual development and team development right now—about fine tuning things and trying to hit our stride.”

Each game UMass wants to improve on at least one aspect. Specifically, the team talked about looking for ways to increase the number of assisted goals and strong defensive stands.

St. Bonaventure’s game is the second of three home games—something the Minutewomen have constantly taken pride in. Winning at home means more than satisfying a home crowd for the coaches and players; it has a lot to do with how they view themselves.

Coach McMahon translated this perspective, saying that this home game, just like the others, is about defending home turf, playing with pride and, most importantly, representing their program well.

The Minutewomen have yet to lose at home this year and hope to remain unblemished after their match against St. Bonaventure this Friday at 3 p.m.

Justin Ekstrom can be reached at [email protected] or on Twitter @JustinJEkstrom.