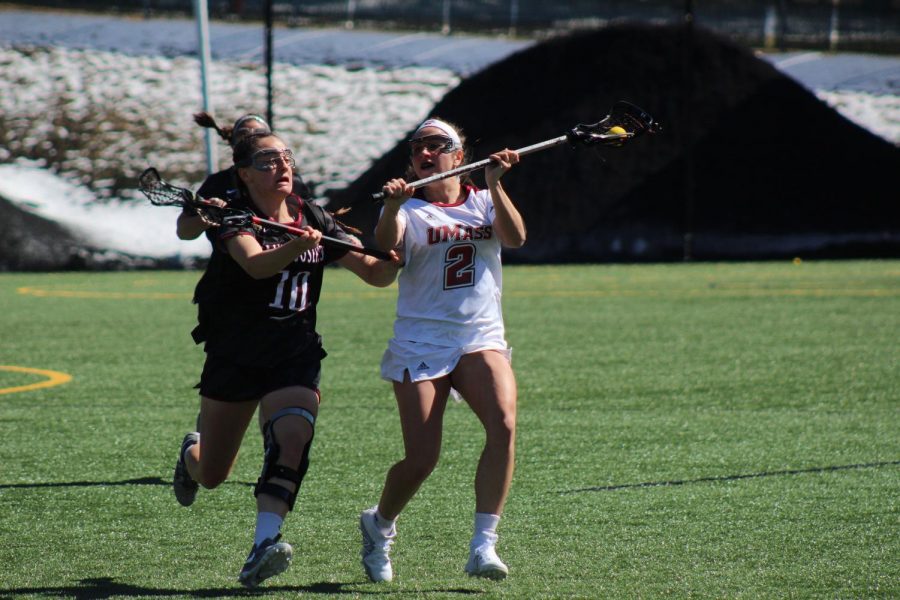 Heading into a matchup versus St. Bonaventure, the Massachusetts women’s lacrosse team is looking to focus on the smaller aspects of the game to avoid falling into a trap and losing.

“I think it’s really just focusing in on the individual ‘game within the game,’” said coach Angela McMahon. “It’s focusing on specific things rather than ‘lets go win the game.’ We want to focus in on draws, efficiency in our scoring and limiting their shots in quantity and quality.”

The Minutewomen (7-3, 2-0 Atlantic 10) have done an excellent job in these departments so far this season.

UMass has nearly kept an even advantage in the draw control department, winning 145 draws in its favor compared to its opponents’ 147. This equality in the draw circle should shift in the Minutewomen’s favor on Friday, as the Bonnies (0-10, 0-2 A-10) have only tallied 93 draw controls to this point in the season.

St. Bonaventure goalkeeper Morgan Conroy ranks sixth in the country, averaging 11.13 saves per game. However, this is partially a result of the unusually high 37.5 shots against average she faces.

Scoring efficiently should also not be a problem for the Minutewomen. They’ve converted 41 percent of their shots into goals this season. Fast-paced transitional play, and even-handed scoring distribution among offensive players, has allowed UMass to average about 20 goals per game over its last three games.

What has allowed the Minutewomen to really shine this season, however, has been the play of their defense.

“I think they’re doing a better job in terms of communications and talking to figure out scenarios and situations that another team is doing,” McMahon said about the leadership on the UMass defense. “What we’re trying to do is not only elevate our chemistry, but our overall game sense and seeing where our weaknesses are. Knowing that we have to try and focus in on those, we know that it doesn’t always show up as stats.”

This leadership and chemistry within the defense could prove pivotal on Friday. Though seniors Kristen Lomanto, Alex Flobeck and Kasey Keane headline the UMass defense, the majority of the defense consists of underclassmen with limited collegiate playing experience.

Coming off a game versus Davidson, where they allowed only four goals off 18 shots, the youthful defensive core cannot let their confidence overtake them when taking the field versus St. Bonaventure.

However, should the UMass defense start to falter against the Bonnies, McMahon is confident that the defense can adjust.

“I think that they’ve done a really great job of in-game seeing what’s going on, recognizing it and honing in on it. It’s them and our coaching staff both doing a really great job at halftime pointing things out, noticing adjustments and little tweaks, and then those veteran leaders really being able to make those game adjustments,” McMahon said.

Game time on Friday is set for 3 p.m. at Garber Field.