‘We have a long way to go, but we have made some progress’ 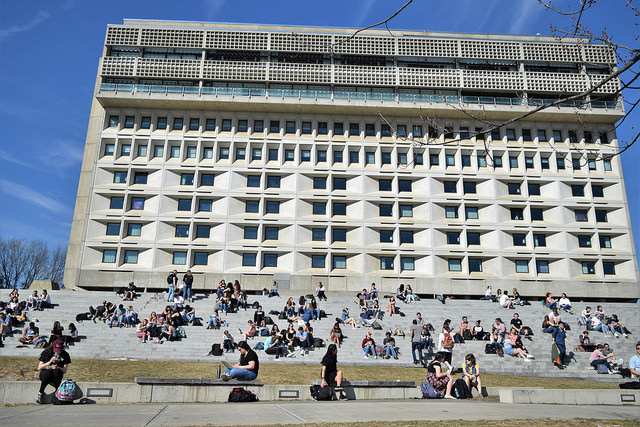 Well renowned author, filmmaker and educator Dr. Jackson Katz visited the University of Massachusetts on Tuesday evening, explaining his research and prevention strategies about sexual harassment to the UMass community.

Katz, who attended UMass as an undergraduate, explained that his interest in feminist issues began when, as a philosophy major, he became the first man to minor in women’s studies at the University. Since graduating, Katz has received his master’s degree from Harvard University and his Ph.D. from the University of California Los Angeles. In the past decade, he has presented to over 1,000 schools and universities worldwide on the topic of sexual violence.

In his talk, titled “Men &#MeToo: Possibilities & Perils in a Time of Change,” Katz discussed how discussions on sexual violence should focus more on the causes rather than the outcomes.

“A big part of what I’m doing here is to think of ways that we can help prevent violence from happening in the first place,” Katz said, “rather than having to rely on police after the fact of sexual harassment.”

Katz explained how despite the abuses of women occurring for over thousands of years, it was not until the 1970s that battered women programs, rape crisis centers and help phone lines were created in the United States.

“We have a long way to go, but we have made some progress” Katz said, comparing the U.S.to other countries that utterly lack these resources entirely. Katz credits these resources to the increased amount of leadership and women in power over recent decades.

According to Katz, there are misconceptions about women’s advocacy and leadership in the current campaign of sexual harassment awareness in the wake of the Harvey Weinstein scandal. Some individuals believe that women and girls have benefited from the #MeToo movement, which in turn pushes some men back and degrades the accountability of all men. Katz disagrees with this notion because he does not believe that it is the #MeToo movement that has disadvantaged men, but that sexual assault male perpetrators are disadvantaged by their upbringing in general.

Over the course of his research, Katz found that men who have been or witnessed abuse at a young age are 10 times more likely to be abusers themselves to their partners and families. Katz believes that this violent behavior growing up contributes to mass incarceration rates in the U.S. In the general binary sense, males are more likely to deal with trauma externally by taking violence out on others, whereas females deal with trauma more internally through guilt.

Katz contrasted the misconception of women’s increased leadership and power through the #MeToo movement as disadvantaging men by explaining that males have instead benefited through the increased recognition of male sexual victimization. The sexual assault of males against other males was first recognized in the U.S. military and was uncovered by feminist women in the 1970s. The #MeToo movement has brought more attention to not only sexual assault experiences of women but of men as well.

Katz believes that the issue of sexual assault can be solved through people speaking up and not being bystanders.

“There’s a problem when we use the term ‘women’s issues’ when we talk about sexual assault and domestic abuse,” said Katz. “The biggest reason is that it gives men an excuse not to pay attention. A lot of men hear this term and tune it out because they say, ‘Hey, I’m a guy. That’s a girl’s issue,’ and then we don’t get beyond the first sentence.”

Ocean Eversley, a communications and Afro-American studies major with a concentration in social justice at UMass, discussed how she felt that sexual assault presentations should be mandatory for all incoming college students.

Rob Okun, the editor and publisher of the Amherst-based “Voice Male” magazine, gave his thoughts on the common phrase, saying that “what’s true for most men of all ages is that there’s been no conversation or education around how we socialize both boys and girls, but particularly that phrase ‘boys will be boys’ has carried on for hundreds of years, and no one really broke it down that denigrate boys and is really a distasteful phrase.”

Eric Barthold, a UMass graduate student in the social justice and education department, believes that lectures like this should be mandatory for all, as opposed to just interactive learning programs online in the summer before the school year.

“Programs like this have to be like a targeted thing, and if it was mandatory for all, we wouldn’t be able to fit everyone here on campus,” Barthold said. “If we were strategic in things like working with athletics or working with fraternities or working with the Men and Masculinity Center, I think those would be good ways to channel that mandatory discussion.”

Katz’s violence against women talk has been viewed by over 3.4 million people worldwide, and this number continues to grow with each lecture.

Gretchen Keller can be reached at [email protected] and followed on Twitter at @gretchenkellerr.