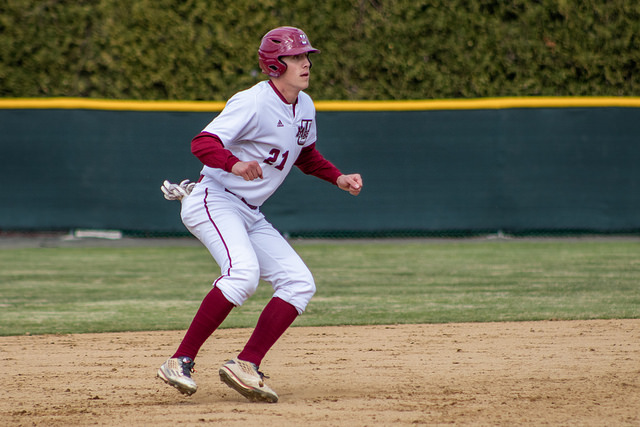 The home run derby came to Amherst Wednesday, much to the dismay of the Massachusetts baseball team.

The Black Bears’ (12-28, 6-9 America East) eight-homer day is tied for the second-most home runs in a game this season and, led by catcher Christopher Bec (three home runs for five RBIs) and right fielder Hernen Sardinas (team-high six RBIs). Ten of the 11 batters Maine put to the plate throughout the nine-inning affair recorded at least one hit.

“I think maybe as a team emotionally you got to do that, but there’s certainly a lot to learn from what happened out there today,” Minutemen coach Matt Reynolds said. “We just didn’t, mostly on the mound, didn’t execute. And then when we’re not throwing quality strikes then it gives a good-hitting team like those guys an opportunity on a good hitting day to just sit back and wait for their pitch.

“When they got their pitch elevated, and we did leave a lot of balls in the center of the plate, they took advantage of it. That was today, for the most part.”

Maine spattered 26 hits with 14 good for extra bases. It was the most hits in a single game for the Black Bears since April 6, 2012 when they belted 25 against UMBC.

It was in the second and seventh innings where Maine sent balls over the fences almost automatically. The Black Bears smashed back-to-back-to-back homers in both innings with four of the homers being solo shots, one two-run blast and one grand slam included in the mix.

In perhaps the most surprising development of the entire day for Maine, 22 of its 24 runs came with two outs.

Minuteman starter Sam Cooper took the loss after allowing seven runs on eight hits in only two innings of work. Reliever Spencer Bergeron pitched the next three innings, escaping relatively unscathed with no earned runs to his name. Zach Clevenger came on in the fifth and the Black Bears went to town, scoring 11 of their 24 runs off the freshman. Scott Hovey was next and conceded three runs before Marcus Fry pitched a scoreless 0.2 innings coming in from shortstop.

“It was a little bit of the same story with all of our guys that went out there today,” said Reynolds. “Command just kind of wasn’t there, wasn’t sharp and it gave the opposing team the chance to sit on a fastball in the middle. To their credit they got them most of the time and they hit them well.”

Fry drove in two runs for UMass on a double and single. Eddy Hart, Logan Greene and Justin Voghel each added one RBI with Voghel’s coming on a home run in the bottom of the sixth inning.

“We do have to emotionally move on but you have to learn from that because otherwise you’re destined to come back and repeat that. It certainly was not a performance overall, regardless of any injuries you have or our depth, it’s not a performance that we’re proud of,” Reynolds said.

The Minutemen return to action at Stony Brook at 12 p.m. on Saturday.