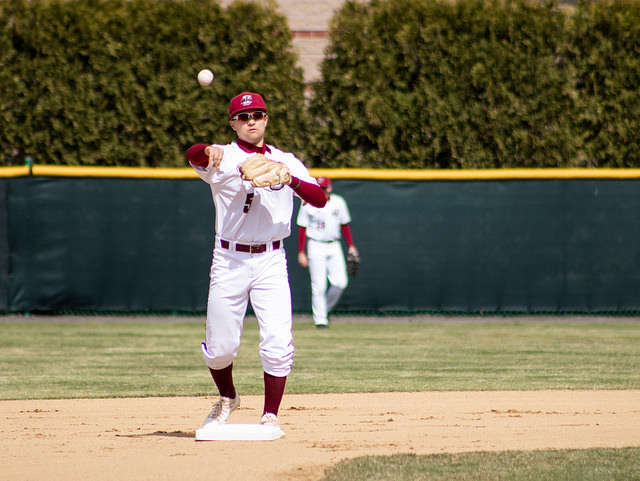 Marcus Fry was the star for UMass (13-21, 5-13 Atlantic 10), going 3-for-5 including a double and a grand slam, bringing home a career-high six RBIs. Eddy Hart was right behind going 2-for-5, extending his hitting streak to nine games, with two runs scored.

“I thought we played well, they were a pretty good hitting team and it was a good day to hit down here,” UMass coach Matt Reynolds said. “We’re continuing to play clean defense which is fantastic, hopefully we keep that up and the bats are just starting to come alive, which is great.”

The Minutemen put forth their most successful inning of the year in the top of the fourth while ahead 4-0. After Nolan Kessinger flied out to center field and Ryan Lever struck out swinging, Hart singled to left field before Greene and Norton were walked to load the bases with two outs.

Fry then smashed a grand slam for four RBIs to make it an 8-0 contest.

“It was great, he got every single inch of it too,” Reynolds said. “It was a no-doubter right off the bat, he’s been really swinging the bat well and he’s been taking really healthy hacks. He’s kind of turned a corner a little bit.

“It was just one of those days where we just knew if he got a barrel on it and got it elevated a little bit, it was going to go. Luckily we had three guys on base when it happened,” Reynolds added.

Cooper Mrowka then singled to left field before Brett Evangelista and Keith Linnane were walked to reload the bases for the second time in the fourth. Hartford (16-26, 10-5 America East) made its’ third pitching change of the evening in hopes to escape the inning, Kessinger then struck out looking, stranding three runners on base.

“I thought the team played really well,” Fry said. “It was much needed coming off this past weekend where it took us a little while to get the bats going.”

It wasn’t until the bottom of the fifth that the Hawks registered a run.

Hartford’s Drew Holtgrieve walked before Drew DeMartino singled through the right side. The Minutemen made a double play on Nick Campana’s grounder but Bryce Walker was walked to put runners on first and third. Andrew Bardzell cleaned up with a home run to left field to make it 8-3.

UMass capped off its scoring of the night with three addition runs plated in the top of the ninth. Mrowka took first after getting hit by a pitch. Evangelista reached base on an error and advanced to second, setting up Kessinger who drove in two runs with a single to center field.

Freshman Drew Metzdorf added an RBI single to left field to make it 11-3.

The Hawks tacked on their final run in the bottom of the ninth on a Chris Sullivan RBI.

“(Those last two runs) was something that we needed,” Reynolds said. “It was just one of those days where you feel like you needed a lit bit more just because it was very favorable for the hitters, conditions wise. So it was good to see us extend it.”

Kevin Hassett took the win after only giving up three hits through five innings of work and striking out four Hawks batters.

James Judenis was hooked with the loss after allowing three hits through two innings.

“Hassett did a great job, it was good to see him find a groove like that and just dominate,” Fry said. “We had solid defense, solid pitching and solid hitting all the way around, all game.”

First pitch is scheduled for 3 p.m.

Mollie Walker can be reached at [email protected] or on Twitter @MWalker2019.