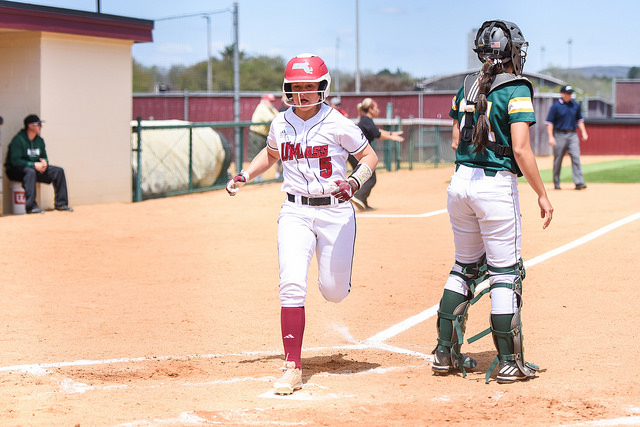 It wasn’t easy but the Massachusetts softball team took both games of its doubleheader with George Mason, Saturday afternoon at Sortino Field.

Game two offered plenty of drama particularly in the late innings. In the bottom of the eighth inning with the score tied 1-1 and the bases loaded, right fielder Riley Gregoire laced a single back up the middle scoring Amy Smith, giving UMass a 2-1 walk-off victory.

“She has been an absolute workhorse for us these last couple of months,” Minutewomen coach Kristi Stefanoni said about Gregoire. “I have complete confidence in her in that bottom spot that she’s going to get the job done.”

Smith struck a one-out single to left field to put the pressure on Patriots reliever Madison Larsen in the eighth. UMass (33-12, 21-0 Atlantic 10) shortstop Kaitlyn Stavinoha was next and Larsen managed to put her aside for the second out but then walked Hannah Bunker and Alyssa Lyon to load the bases for Gregoire.

After Larsen’s first pitch of the at-bat was low and away, George Mason (22-26, 12-10 A-10) called for a mound visit to talk things over. The next pitch however, Gregoire made no mistake with a hard base-knock to center field which allowed the game-winning run to cross home plate.

“When the coach came out to talk to (Larsen), the conversation that went through my mind was telling her to make me win it, pretty much, just give it to me,” Gregoire said. “I noticed the shortstop was pulled over and I was just looking for a strike.”

Senior Jena Cozza had a chance to end the game in the bottom of the seventh inning with two outs. As UMass’ top offensive threat, Patriots starter Haellie Gordon didn’t give her much to hit, throwing three straight balls. Cozza nearly poked one down the right field line on the fourth pitch, after talking it over with Stefenoni, but the ball landed in foul territory. Cozza then reached first base on a walk.

“I really didn’t want to walk,” Cozza said. “I thought that they might walk me when their pitching coach called timeout, but then they started pitching to me. I called time to ask coach if it would be ok to swing 3-0 if she left it, and she did but I didn’t want to go outside myself and chase it.”

Freshman Kiara Oliver went the distance on the mound, pitching all eight innings for the Minutewomen, giving up just five hits and one walk while striking out eight.

“She deserved it, she really did,” Stefanoni said about the decision to put Oliver back on the mound in the eighth.” She was giving us ground balls, we were picking them up, fielding them so I didn’t really see anything that would give me a reason to pull her.”

Up 1-0 in the sixth inning, five Minutewomen runners touched home base to blow a close game open and into a comfortable lead.

All with two outs, Gregoire started the attack with a single to left field. Cozza then caught a break when Patriots second baseman Marissa Butts dropped a routine pop-fly and in doing so, gave UMass a second chance that they pounced on.

Stacevicz sent a dart to right field driving in both Gregoire and Cozza to push its lead to 3-0. Carbone then singled that scored Stacevicz followed by a single from junior Melissa Garcia. Smith concluded the breakout inning with a single, pushing two more runs to the plate to make it 6-0.

Senior pitcher Meg Colleran bumped her record up to 13-5 with the win, surrendering just four hits, no walks, and adding four strikeouts in the complete game effort.

“I’m big on learning experiences, I’m big on things happening for a reason so I appreciate the battle that we just had. It shouldn’t have happened, but I appreciate it,” Stefanoni said.