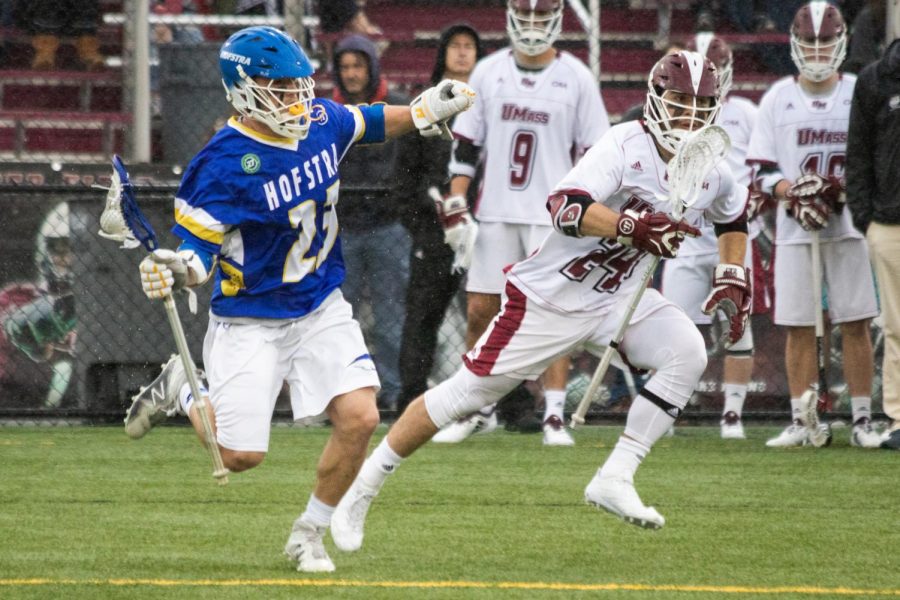 When the Massachusetts men’s lacrosse team hosts Hofstra for the semifinal round of the 2018 Colonial Athletic Association playoffs on Thursday at Garber Field, it certainly won’t be a matchup between unfamiliar opponents.

Instead, just six days removed from their last meeting which saw UMass (10-4-0, 5-0 CAA) dominate the Pride (6-7-0, 2-3 CAA) in a rainy regular season finale in Amherst, it will be the third matchup between the two teams in just one day under a full year’s time.

Prior to their explosive 14-6 performance last weekend, the Minutemen also faced Hofstra in the 2017 semifinal round, which saw UMass upset the Pride on a last-second prayer from 35-yards out before ultimately dropping the conference title game two days later at the hands of Towson.

“Hofstra spanked us last year in the regular season and then two weeks later we beat them,” he said. “You never want to lose a game but just to have that experience and to alert our guys that it’s going to be a different game — the same things that happened aren’t going to happen.”

“The storm is going to be there for 60 minutes so we’ll have to weather it that long,” Canella added. “I know I won’t be comfortable until the game is over. I’m sure they’re feeling the same way and are going to fight to the end.”

Senior tri-captain Jake Lisauskas has been a part of the Canella-led UMass program for all four years of his collegiate eligibility, and it certainly shows in his preparations for the postseason.

“It’s about getting guys ready for that next game,” Lisauskas said. “We’re not looking too specially into anything. We’re really just trying to move forward and be 1-0 on Thursday.”

“I think composure will be a huge part of it,” he added. “It’s do or die now. Hopefully our guys will be ready to go.”

The Minutemen are in the midst of a nine-game win streak heading into Thursday’s opening playoff matchup, which began all the way back in March after a dismal 1-4 start to the season.

But due to a combination of lessons learned and a slight shift in the team’s overall mentality, Lisauskas said, UMass was able to get itself back on track in convincingly dominate fashion.

“I think everybody bought in and listened to coach more so about the intangibles and putting in extra work throughout the season,” he said. “We didn’t give up on each other when we were down and that’s translated into the success that we’ve had, and hopefully continue to have.”

Just as the Minutemen are riding a hot streak entering postseason play, so too is junior goaltender, Sean Sconone, who was thrust back into the cage in the first week of April after a slow start to the season as the primary netminder.

Through 217:08 of action in his last four appearances since taking over for freshman Hampton Brannon in the cage, Sconone has allowed just 17 goals with 55 saves along the way — most notably a career-high 20 stops against Fairfield two weeks ago.

In Friday’s matchup against Hofstra, Sconone allowed three goals in the first quarter which allowed the Pride to jump out to an early advantage.

However, the New York native’s 14 saves in regulation were enough to keep UMass within striking distance, which it certainly took advantage of when it scored ten consecutive goals to jump out to a 12-3 advantage that it would not concede for the remainder of the game.

For Lisauskas and the rest of the Minutemen, Thursday’s matchup, although nothing to lean on, provided an insightful look into what it will take to leave Friday’s semifinal matchup victorious.

“We saw what [Hofstra] did against us early and [how we responded],” Lisauskas said. “It’s going to be a game of heart and hopefully our guys come out with a lot of that.”

Liam Flaherty can be reached at [email protected], and followed on Twitter @_LiamFlaherty.