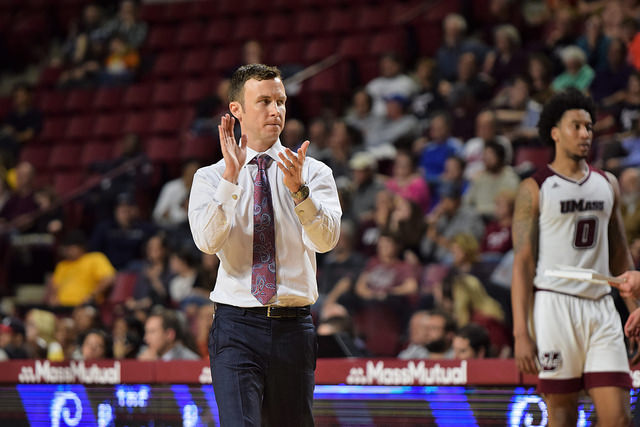 “After just one year at UMass, it is apparent that Matt very quickly changed the trajectory of our basketball program for the better,” Bamford said in a press release. “I am pleased to return Matt to five years on his contract and reconfirm our commitment to him and the process needed to rebuild our nationally recognized basketball program.”

McCall guided the program to a 13-20 finish, taking over a program in turmoil after the firing of Derek Kellogg in March of 2017. Despite the mass exodus that followed, with seven players transferring out of the program, McCall managed to improve the team’s Atlantic 10 record with a 5-13 finish.

The flurry of outgoing transfers wasn’t the only obstacle of the 2017-18 season — grad transfer Jaylen Brantley never played a minute for the Minutemen after a heart condition diagnosis in October, sophomore forward Chris Baldwin missed the second half of the season with a quad injury and junior center Rashaan Holloway was ruled academically ineligible in January.

UMass still managed signature wins over Providence and Georgia in December, as well as two big wins over Dayton in conference play. The Minutemen topped La Salle in the opening round of the A-10 tournament and led the majority of the way in a second-round loss to George Mason.

The Minutemen are losing big men Malik Hines and Chris Baldwin, both announcing plans to transfer from the University, but expect to get Holloway back for a grad year. UMass also returns All-Conference Second Team guard Luwane Pipkins, the A-10’s second-leading scorer last year, as well as All-Rookie guard Carl Pierre.

McCall will also bring in four transfers that had to sit in 2017-18, as well as his first full recruiting class, with Tre Wood, Samba Diallo and Sy Chatman set to join the program.

After finishing second-last in the A-10 in 2017-18 without much to work with, the growing sentiment around the league is that UMass is ready to make a jump next season. With his contract extended, McCall has the time to try and fully rebuild the program.