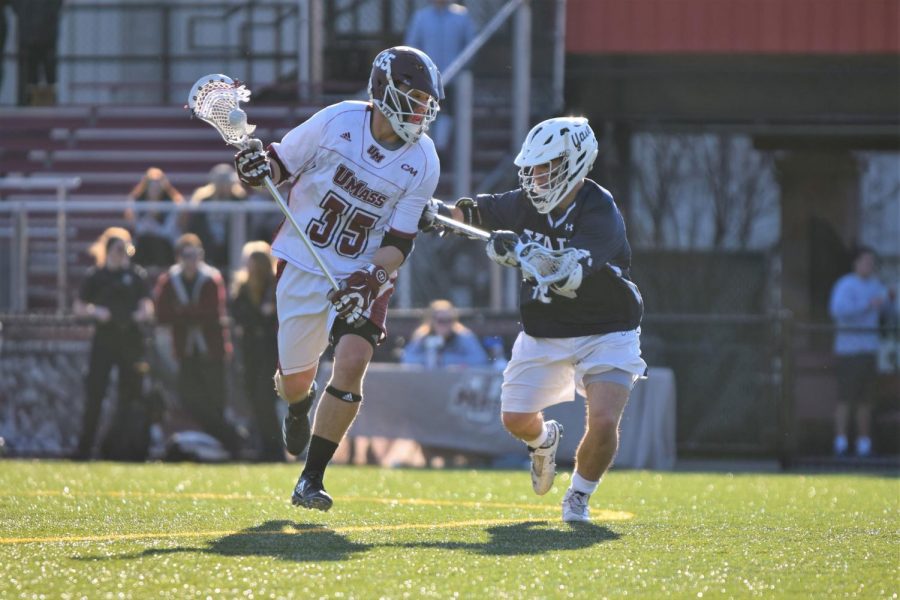 Buddy Carr drives to the net during UMass' regular season game against Yale.

During its 11-game win streak, the Massachusetts men’s lacrosse team had won games in many fashions, from blowouts to fourth quarter comebacks. In the opening round of the NCAA tournament, the Minutemen found themselves in a hole in the fourth quarter, but were unable to rally enough, falling to Yale 15-13.

Trailing 12-7 entering the fourth, UMass had an uphill battle to climb to dethrone the tournaments third ranked team. The hill grew larger after Matt Gaudet scored on a man-up goal and Jackson Morrill followed that with his seventh goal of the game to put the Bulldogs up seven with 12:54 remaining.

Still, there was no quit in the Minutemen. Ben Spencer, Buddy Carr and Kevin Tobin scored consecutive goals to cut the Yale lead to four, but were quickly answered when Brendan Rooney scored for the Bulldogs with 7:19 to play.

UMass would score the next three goals as well, off the sticks of Billy Philpott, Isaac Paparo and Jake Lisauskas, but it would not be enough.

“We played a lot of defense early on,” UMass coach Greg Cannella said in his postgame press conference. “We got a little tired. We scored quickly when we did score to keep it close in the first half there and obviously they went on their run in the third quarter.”

The Minutemen opened the game by scoring the first two goals, yet Yale was able to come back with three straight of their own. Both teams would trade goals throughout the rest of the first half, and the Bulldogs took a 6-5 lead into the intermission.

The third quarter was when the Yale offense, which entered as the third-ranked scoring offense in the country, began to assert itself. Morrill scored the opening goal of the half, and Carr was able to score one of his own to keep the Minutemen trailing by only one. That’s when the Bulldogs scored five straight to take control of the game. Chris Connolly would score with 1:39 left in the quarter to stop the bleeding.

Carr led UMass with three goals and one assist, while Isaac Paparo added two goals from his long-stick defensive position. Noah Rak led the Minutemen with nine groundballs. Outside of Morrill, Ben Reeves had a big offensive day for Yale, scoring two goals and dishing out four assists.

One area of the game UMass has been able to dominate all season long has been the faceoff circle, but Bulldog Conor Mackie was able to get the best of Rak, winning 20-29 faceoffs. The Minutemen also struggled in man-up situations, failing to convert on all four chances with the extra attacker.

For UMass, making it to the NCAA tournament seemed like a longshot after the first month of the season. The Minutemen were 1-4, yet were able to turn things around and go unbeaten in the Colonial Athletic Association to earn a bid into the tournament.

“We’re very proud of our group and our team,” Cannella said. “The way they persevered, not only through this game, but it was sort of a microcosm of our season. Starting out 1-4 and fighting through a lot of adversity and going on a run and being in the spot that we are in today.

“We’re proud of these guys,” he continued. “Proud of our seniors, and just in general the overall effort these guys gave us throughout the year and the tremendous leadership our captains brought to the program and helped us change the culture.”