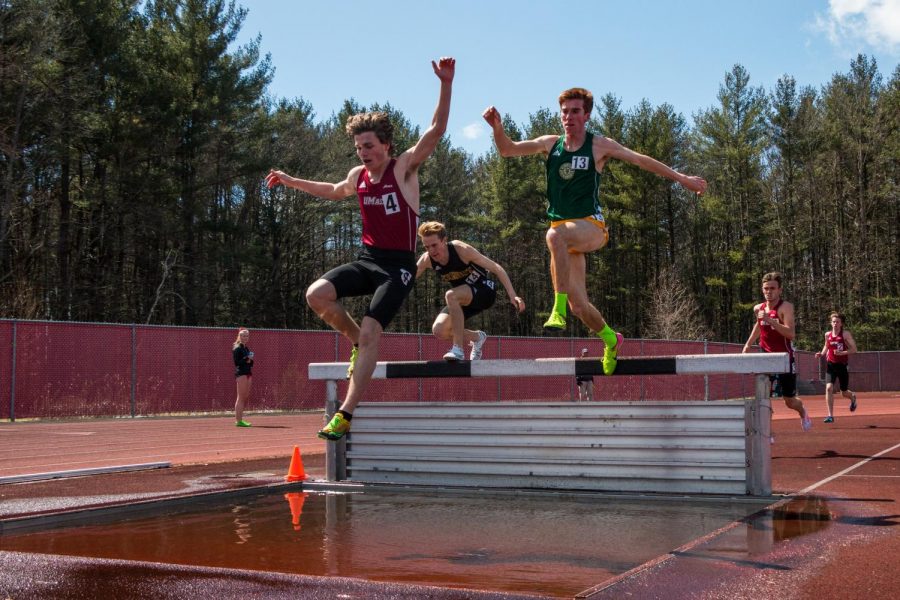 The Massachusetts track and field teams spent the weekend at George Mason University in Fairfax, Virginia at the 2018 Atlantic 10 Championships where both teams found themselves in a middling position. The women were fourth and the men were sixth, but they put up a tremendous amount of personal bests, new records and medals, highlighted by redshirt senior Heather MacLean’s double victory in both the 800 and 1500 meters.

In the final A-10 championship of her career, MacLean continued to dominate the distance events. This weekend she took the win for the second year in a row in the 1500 meters with a time of 4:19.87 seconds and finished first for the third time in the 800 meters in 2:05.61, breaking her own meet record. Then MacLean went on to be part of a 4×400-meter relay team with sophomore Lindsay Witt, freshman Kaela Hardy and junior Emilie Cowan who broke a 20-year old school record with their time of 3:45.74. The team finished fourth in the meet.

MacLean was not alone atop the podium this weekend, as sophomore Jada Harris ran a personal best of 14.09 seconds in the 100-meter hurdles despite a foot injury that will sideline her at next week’s New England Championships. This will be a move that coach David Jackson believes will lead to a more productive summer and an even better junior campaign for Harris.

“Jada (Harris) is one of the pillars of our team,” said Jackson. “To go out and run like that not only shows her determination as an athlete but also shows the quality of her personality. She puts everything on the line for this team and I am very excited to work with her for two more years.”

Additionally taking gold this weekend was redshirt junior Bridget Deveau. She recorded her second career A-10 win in the heptathlon, scoring 5,044 points. In the process, she took fourth overall in the javelin at 133 feet, one inch and she won the 800 meters in 2:21.42.

Also coming away with podium finishes for the Minutewomen was Danielle Notarfrancesco who broke the school record in shot put with a runner-up throw of 48 feet, 1.75 inches. Also earning a medal was Cowan, who ran 54.08 seconds in the 400 meters to collect bronze.

This meet also included some more entries into the record book when the 4×100-meter team of Witt, junior Charlotte Robinson, freshman India Johnson and senior Diamante Spencer broke the tape with a time of 47.12 seconds, good for second all-time for UMass and fifth in the meet.

While the men came away with less hardware, there were still four bronze medals awarded to the Minutemen. On Saturday, sophomore Dawson Bathgate, who ran 9:03.55 in the steeplechase, senior John Chuma, who cleared a season-best 15 feet, 11 inches in pole vault and junior John Long, whose javelin throw of 201 feet, two inches was also a season-best, all earned third-place finishes Then Evan Burton came out on Sunday with a discus throw of 157 feet, 10 inches to also claim third. Overall, Jackson saw great energy and determination despite a banged-up roster.

“We’ve got a few guys that are down right now, but I am proud of the way our team performed despite the hardship they faced this weekend,” said Jackson. “This came especially from our older guys and considering that we are not losing many people this year, I think we are set up very well for next year and beyond.”

Most of the team has one more meet, as there are many qualifiers on both teams for the New England Championship meet in Hanover, New Hampshire, set to begin on Friday, May 11. From there, the top athletes will compete in NCAA Regionals in Tampa, Florida over Memorial Day weekend.