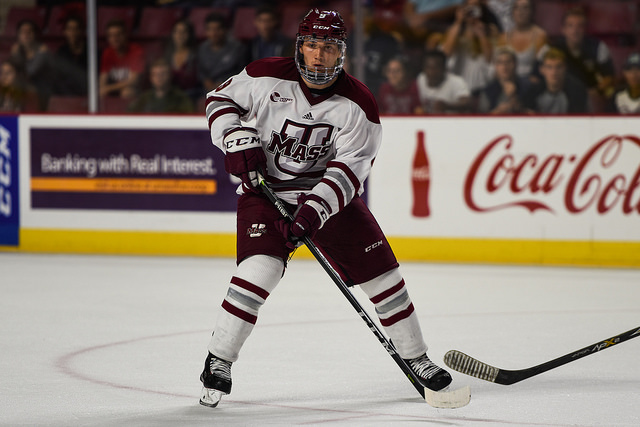 Leonard joins fellow Minuteman Mario Ferraro as draftees of the Sharks as Ferraro was selected 49th overall in the 2017 NHL Draft by San Jose.

“I’m very excited for Johnny after being selected by San Jose in (Saturday’s) NHL draft,” coach Greg Carvel said in a statement. “He is a gifted offensive player that worked hard this year to develop himself into a more complete hockey player both on and off the ice. I expect him to be one of the best offensive players in the Hockey East during his remaining time at UMass.”

Born and raised in Amherst, Leonard led UMass in scoring as a freshman last season with 28 points in 33 games played. Leonard’s 13 goals tied with Mitchell Chaffee for most on the team and tied for second all-time for goals by a freshman in the Hockey East era.

With his selection, Leonard becomes the first Minuteman to be chosen in the NHL Draft following his freshman season since Justin Braun was a seventh-round pick of the Sharks in 2007.

“This selection should provide great motivation for him to continue his growth as a player and as a teammate,” Carvel added. “He has offensive ability that is hard to teach and I’m glad San Jose recognized his great potential.”