Isabella explodes for UMass football in win over Duquesne 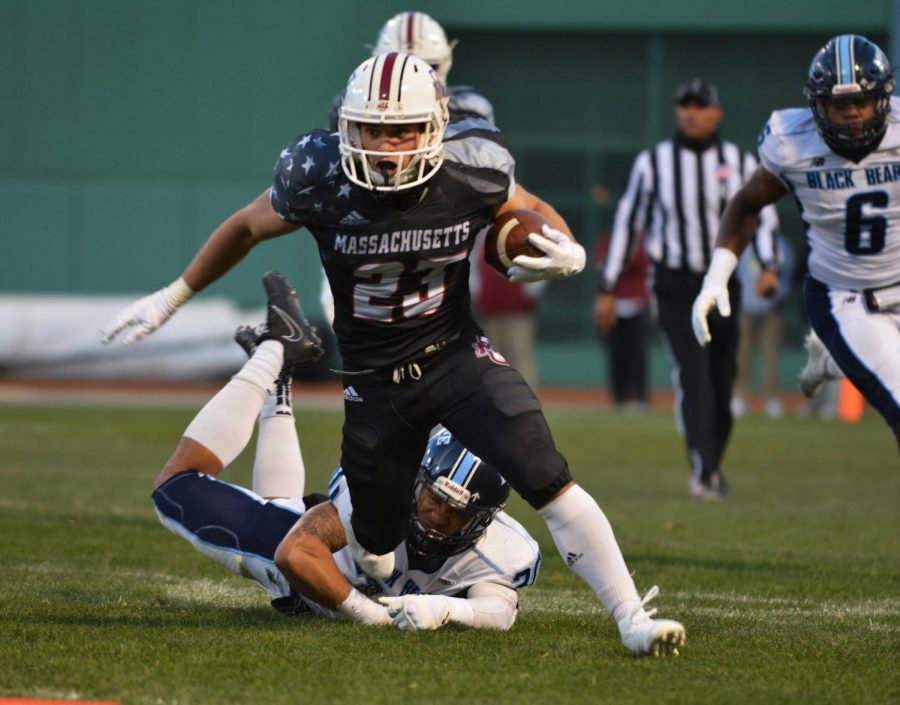 Only one game has been played, but it already appears there will be no stopping Andy Isabella.

“I thought we took advantage of a couple of mistakes,” UMass coach Mark Whipple said. “Duquesne dropped a ball, Bakari made a big play, then right away Andrew threw a good ball and Brennon made a nice play. And then we hit the big play to Izzy that Ross threw. We saw some things on tape that we thought we could take advantage of with our speed.”

Over the 60-minute affair, No. 5 caught five passes for 131 yards, with a 14-yard rushing touchdown to go along as well.

Already up 7-0 courtesy of a 32-yard connection between quarterback Andrew Ford and wide receiver Brennon Dingle on the Minutemen’s first offensive play, little time was wasted before the senior from Mayfield, Ohio made his mark.

On UMass’ next drive, Isabella cut across the wide-open field and caught a strike from quarterback Ross Comis and proceeded to take it 60 yards for the score.

Early in the second quarter, Isabella took his only rushing attempt to the house on a nicely executed end-around, making it 28-3 Minutemen.

The score marked just the second rushing touchdown of Isabella’s career. The first came almost 365 days ago in UMass’ 38-35 loss to Hawaii.

To kick off the second half Isabella executed his prettiest touchdown of the evening. Along the right sideline, the 5-foot-10, 190-pound receiver handled a hard pass from Ford and then juked a Dukes defender on the way to a 44-yard touchdown.

“Andy did a really good job on that play,” Ford said “He saw me scramble and he started coming back to me knowing that I was probably going to throw it a little bit deeper. He came back to me, the corner flipped his hips, and I threw it right behind it. You can’t really teach that. That’s just a guy that’s been around college football for a couple years and he’s confident enough to make those plays.”

The 2018 campaign marks the third season in which the passer-receiver combo of Ford and Isabella have shared a Minutemen uniform and the chemistry between the two was on full display at McGuirk Alumni Stadium.

“Izzy and I have had chemistry now for a couple years. I know exactly where he’s going to be and he kind of has a feel for where I’m going to throw as well. So especially early on like they said, coming out in man-to-man, it was important to just throw them to spots and letting him win,” said Ford. “(There’s) a lot of faith in him, a lot of faith in all of the other guys as well so just a good start for us.”