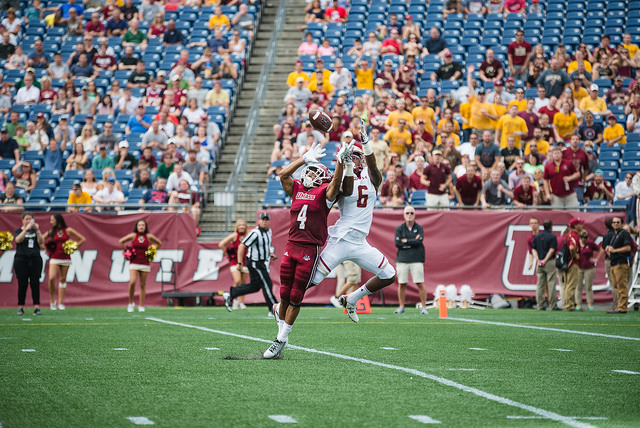 Following a notable season-opening win, the Massachusetts football team looks to carry some momentum into their Saturday afternoon contest against a historically difficult opponent.

The Minutemen (1-0) tackle their first road game of the season, traveling in-state over to Boston College for the first time since 2011. The Eagles host UMass for their season opener.

“[BC is] physical and they’re tough, they’re well coached. They’ve got veteran guys that I’ve known a long time, they do a quality job,” coach Mark Whipple said after Wednesday’s practice. “Where they’re at and what people think of them is no surprise because of the talent level they have.

“It should be a good game. We have a lot of respect for Boston College and the football program,” he added.

Flooding 572 total yards on Duquesne in its home opener, UMass set a FBS-era program record for a season opener. Quarterback Andrew Ford believes that the home-opening win gave the Minutemen a confidence boost to ignite the season.

“I think it was big for us as a team to just come out and play as well as we did, just to start as fast as we did,” said Ford, who threw for 186 yards and two touchdowns against Duquesne. “For most of the teams around the country, that first game you have a lot of little mistakes that normally cost you. So for us to get those out of the way and still come out with a win was huge for us.”

Ford doesn’t believe that the win itself was what meant the most to the team, but how effectively they played together. He believes that the confidence will stem from how they dominated offensively while still understanding that there’s room to improve.

The last time both teams met was in 2016 at Gillette Stadium, where BC walked away with a 26-7 victory to improve its 20-5 series advantage over UMass. The Eagles hosted the Minutemen for their season opener in 2014 as well and have claimed the last nine consecutive meetings.

The Maroon and White haven’t recorded a win against BC since a 27-0 shutout in 1978.

“They hurt us two years ago, we have to be on point and disciplined with our eyes,” Whipple said. “We have to make some plays on defense, we have to knock them back and try to get the ball and not give up the big play which we happened to do two years ago.”

Whipple mentioned how many of his younger players have yet to be on a road trip in their careers and he expects there to be some necessary adjustments for them to make to get acclimated. He anticipates that the bigger stadium, larger crowd, and difficulty with communication will act as obstacles.

“It’s going to be faster, there’s no question. Our guys practiced a lot faster today,” Whipple said. “It’s always different in a game, we’ve got some veteran guys and not a lot of them have played at BC, but they’ve played at other places so we’ll find out Saturday.”

The BC defensive coordinator, Jim Reid, is making a return to UMass after serving several roles in Amherst from 1973-1991. Reid, who has been with the Eagles for the last three years, compiled a 36-29-1 record while with the Minutemen that led to three Yankee Conference titles. He was awarded Yankee Conference Coach of the Year in 1988 and 1990.

UMass hasn’t accumulated back-to-back wins to open its season since 2011 when it defeated Holy Cross and Rhode Island to kick off the Minutemen’s best season in recent memory. Ford believes that being on the cusp of that achievement will act as motivation for the team.

“This is a big game for a lot of people in this state and we understand that,” Ford said. “We know that Boston College is going to be one of the best teams in the country this year and that’s part of the reason some of us came here, was to play in games like this.

“We’re excited for the challenge, we know it’s going to take our best game and I think a lot of guys are excited about that.”