Relaxation at a secluded sanctuary 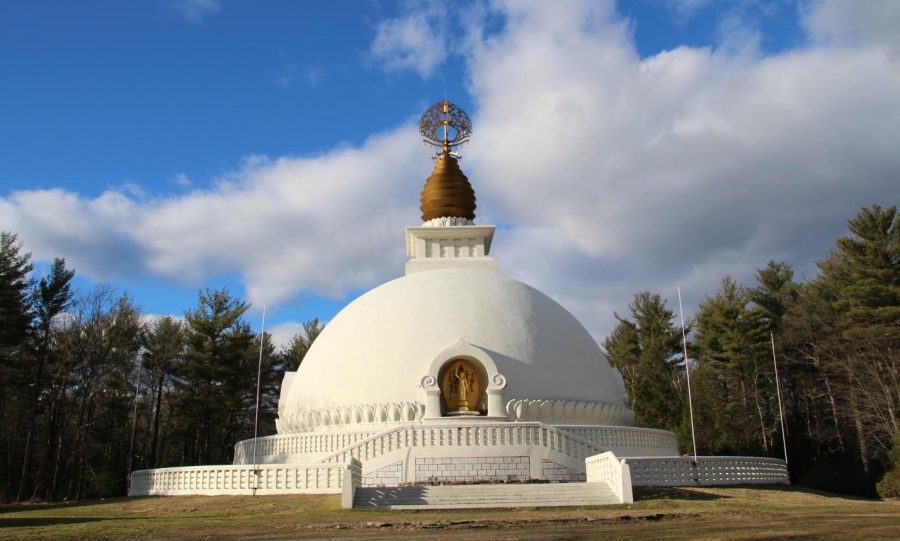 It’s Friday and my alarm goes off at 4 a.m.  I shower, brush my teeth and I’m out the door into the brisk air. I pick up two friends who are crazy enough to join me on this early morning adventure. After a coffee pit stop we cruise to the backwoods of Leverett where we plan on joining the Buddhist Monks of the Peace Pagoda in their morning prayer ritual.  While driving, I remark to them that I have no idea what to expect. All I know is that I talked to a woman named Claire who explained that if I showed up at 5 a.m. I would be able to join her and the other monks in the temple for an hour and a half prayer ritual they performed every morning.

When we arrive, I park in a small dirt lot and navigate us, walking, up a windy dirt road in the pitch black, vaguely remembering the trail from my previous visits to the temple in the daytime. At the top of the hill, the enormous Pagoda is barely an outline in the dark distance. The prayer temple is at the top too, adjacent to the Pagoda monument. An arched window above two heavy-set wooden doors marks the temple’s entrance, a soft warm glow emanating from inside. Hesitantly, we unlatch one of the doors and creak it open, shuffling our way inside. The inner hall is elaborately decorated with large columns, golden chandeliers, various food offerings, colorful paintings and a large red shrine at the end of the room that holds many ornate golden statues of Buddha. Fashioned in the middle of the shrine is a portrait of a Buddhist monk.

A surprised monk with glasses, a shaved head and a white and yellow robe greets us and hurriedly tells us to take off our shoes before we have a chance to step any further.  He then hands us thin square pillows to sit on, hand-drums, a leather-bound book with Japanese hymns and a piece of cloth with the chant “na mu myo ho ren ge kyo” written on it.

Once we have taken our places on the floor on our pillows, he gives us a bow and sits down next to a giant ancient drum with Japanese characters ringing the edge.  He removes two large sticks from under the drum and begins beating it, melodically, full force and chanting the same words “na mu myo ho ren ge kyo.” The monk continues drumming and chanting without faltering whatsoever, all the while, my companions and I sit and watch on in silence.

After 45 minutes of this, another monk emerges from the under chambers of the temple and replaces the drummer. During the switch, even when handing off the drumsticks, the monks impressively maintain the rhythmic thrum. Eventually, after another 30 minutes the last monk shows up, a woman, who also takes her turn on the drum.  At about 6:45 a.m., the drumming stops, and all three monks are on the ground in front of us kneeling to the shrine at the other end of the room. They take deep breaths and chant in harmony for what seems like a very long time and suddenly stop in unison. Silence. It is broken by the woman monk who addresses us, “good morning.” I have to clear my throat in order to reply, pulling myself out of my meditative haze. We exchange pleasantries and she explains that the ceremony is not quite over. They always finish by taking three laps around the Peace Pagoda, then proceeded to march out of the prayer temple and into the dim morning light. At each side of the temple there was a different statue of Buddha and at each one they stopped to chant and bow before it. This was the final stage of the prayer ceremony, and so when they finished, we said our thanks and goodbyes.

It was so amazing witnessing such a beautiful ritual at a time of the day when most are asleep. The shock of it really hit me later on in the day during my 9 a.m. anthropology class. I began thinking how incredible it is that such a short distance away, there can be people with such vastly different lives. While at the University of Massachusetts, I think it is easy to get bogged down in to a very linear thought process, get up, go to class and do your homework, but if I took away anything from my visit it would be that although these things are important to our lives and our eventual success, it isn’t everything. I think that it’s really important in order to manage the stress involved in picking classes, juggling credits and raising your GPA, that students realize that the University is only a tiny little pocket of this vast world. And in this vast world, there are people only 15 minutes away who take two hours at the beginning of every day to chant and drum in a form of prayer to Buddha.

So, sometime, take a break from the monotony of your daily college routine by visiting the beautiful New England Peace Pagoda in Leverett. The Pagoda is available for visitation at any time during the day, however the prayer ritual starts at 5 a.m. The area also features an outdoor koi pond and a Zen rock garden. It is an extremely peaceful sanctuary for relaxation, a small escape from the stresses of school.

For a little history: the Peace Pagoda was erected as a symbol for the union of people from all races and religions in the pursuit of world peace.  The Peace Pagoda movement was started by Nichidatsu Fujii, who was the Buddhist monk in the photograph shown on the shrine. In wake of the bombing of Hiroshima and Nagasaki, Fujii decided that he would erect these Pagodas all over the world to promote the ideas of peace and empathy. The New England Peace Pagoda in Leverett was erected in 1985.

Editor’s note: A previous version of this article included incorrect information about when the New England Peace Pagoda was erected. The pagoda was inaugurated in 1985.

Patrick St Martin can be reached at [email protected]