Anonymous tip sent to UMPD about claims of an ‘agitated Black male;’ University employee was walking to work

There was no threat on campus 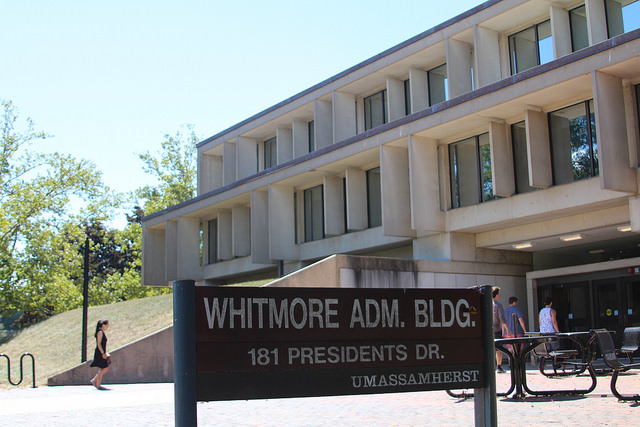 On Friday morning at 7:45 a.m., the University of Massachusetts Police Department received a call on its anonymous tip line describing an “agitated Black male” walking up the ramp of Whitmore Administration Building. The man was said to be carrying a “heavy backpack that is almost hitting the ground,” according to UMPD Chief of Police Tyrone Parham.

Reginald Andrade, an employee of the University for 14 years and consumer manager in the Disability Services office, matched the physical characteristics described in detail in the call.

Andrade has had the same routine for many years. Monday through Friday, he gets up at 4 a.m., walks to Whitmore to drop off his things around 5:45 a.m., goes to the Recreation Center at 6 a.m. and returns to his office in time for work around 7:45 a.m.

On Friday, Andrade said he wore a salmon-colored shirt, gray dress pants, black shoes and carried a black Under Armour duffle bag on his right shoulder on the way back from his workout at the gym.

His day began like any other, arriving at his office and checking his calendar. At around 8:45 a.m., after a restroom break, Andrade returned to his office to find two men in plain clothing who asked to speak with him.

Andrade said the men identified themselves as UMPD detectives and began asking him questions.

“They did not tell me what was going on initially, they just kept asking me the questions. And I just sat in my office chair,” Andrade said. “I was cool and calm and composed. I had no idea what they were questioning me about.”

Chief of Police Parham said it was by chance that UMPD listened to the anonymous message so close to the time it was called in.

“Normally, if there is an emergency going on, or something that is really concerning, people call us, they leave their name and number and call us right away on a line that’s going to be answered 24 hours a day. Either 911 or our 545-2121 number. We’re always on that 24/7,” he said. “We also approach anonymous reports a little bit differently, as far as their level of credibility, because we never know about the credibility.”

Parham said, based on the suspicious behavioral details described in the anonymous call, this was something UMPD needed to promptly look in to.

While UMPD searched Whitmore, they had the building locked to people entering and exiting.

“During this search, while we’re in the building, other staff are saying, ‘What’s going on?’ So, we told them and gave them the description, “Parham said. “Some of the staff were clearly like ‘Oh, I think I know who that is. [He] comes in everyday, works out, carries a large backpack, etc. etc.’ So, within minutes, we figure all of this out and know this is actually a person who works in the building.”

According to Parham, Whitmore was closed off for under 30 minutes while UMPD searched for a threat.

“Once we identified the person who we thought it was going to be, we tried to be as professional as we could, letting him know the background, how this [call] came in. The officers that were there were actually in plain clothes, very intentionally to be very casual,” he said. “This wasn’t meant to be any type of scare situation. We were actually confirming, because at this point we’ve been told ‘Yeah, that’s that employee.’ We needed to now actually confirm.”

One of UMass’ mottos is, “Building a community of dignity and respect.” This slogan can be found all around campus, including on a sign in the entryway of Whitmore.

“We are emphasizing dignity and respect this year, and that is core to what we’re about,” said Ed Blaguszewski, executive director of strategic communications at UMass. “What’s concerning to us is the particulars of the matter in terms of how it was called in and the specifics of the description and was this in some way developed to try to prompt the police to respond.”

“To call the anonymous tip line was very unusual, and just the richness of the detail was very unusual. So that just makes us pause and think, ‘Is there some sort of agenda here for the person calling in?’ We don’t know, but I think it raises questions in our minds,” he added.

Andrade connected this to the incident of racial profiling that occurred on the Smith College campus in July.

This year’s location for a Whitmore office retreat in August was Smith College. Andrade said the location for this was changed because he did not want to go to that campus.

“Our retreat got moved because of me, because I made a point to note that I felt uncomfortable going to Smith College because of racial profiling incidents and I would not feel safe for two days at that campus.”

“No one else gets racially profiled in my office, just me. I’m the only Black male who works in our office. There are very few Black males who work in Whitmore administration, period,” he said.

“UMass was just rated number 26 in the country for a public university. People are still getting racially profiled coming from the gym,” he added.

Parham said there is no way to track calls that come in on the UMPD anonymous tip line.

“We’d like to identify and speak with the caller, just to understand more about that situation as to what exactly they thought was suspicious or why that particular method [was used] as far as the anonymous tip line,” he said.

According to Parham, they believe it could be an employee who works in Whitmore, but considering multiple employees identified Andrade by the detectives’ descriptions, they are not sure.

Blaguszewski said, “We really want people to understand that we respond to these things in a prompt and appropriate manner, and it’s disconcerting when people feel that they’re in some way identified or targeted based on their background.”

“It was about perceived behaviors really. People have gym bags all the time. They walk around with them, they bring them into their offices, but the context of all of that together prompted the right police response, but sort of in a quick and measured, professional way.”