Consistent defensive play the highlight in UMass’ draw against Clemson 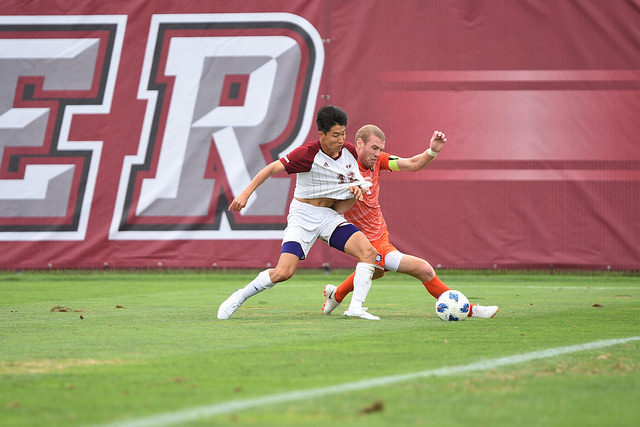 In a season marred by inconsistency, the Massachusetts men’s soccer team found a constant in the effort of their defense.

With Sunday’s 0-0 draw against Clemson (3-2-1), the Minutemen (2-2-2) showcased just how strong their defense is with the efforts put in by the starting back four.

“Trey [Miller] and the back four Dylan [Cranmer], Ryan [Saul], Merk [Brandon Merklin], and Casey [Hamill] were fantastic,” said UMass coach Fran O’Leary. “They’re up against terrific players. They’re all fast, they’re all strong, they’re very good technically and they didn’t get through us too often. They didn’t get over us. They got around us a few times, but if we had to give up anything, it would’ve been the wide areas against them.”

UMass relied heavily on redshirt freshman goalkeeper Trey Miller, who managed to keep a clean sheet and racked up four saves behind a UMass back line that took on 17 Clemson shots.

“I thought Trey was great today,” O’Leary said. “I thought every aspect of his game today was solid. It’ll give him a big dose of confidence moving forward.”

Miller’s efforts were appreciated by the defense as well, as he was able to clean up any mistakes that were made.

“Trey is a phenomenal keeper,” defender Ryan Saul said. “It’s always good to know that you have a really good keeper behind you.”

The highlight for Miller came around the 55th minute, when he made a spectacular save on a ball that was unexpectedly chipped up in an attempt to go over him. It was a save that showed off Miller’s crazy reflexes and ability to contort his body quickly.

“That was a tough one,” Miller said on the save. “I thought he was going to cross it, but he ended up kind of chipping me. Luckily I was in a good spot and I was just able to adjust my body, adjust my feet and keep the ball out of the net. It was a real uncomfortable save.”

The back four for UMass found themselves playing every minute of the game, holding their line and clearing everything out of the box until the final whistle. With the team struggling to keep possession in the first half, the defense had a heavy workload as Clemson laid on the attack.

UMass looked to the center back pairing of junior Ryan Saul and senior Brandon Merklin, who have shouldered the load in the middle of the defense in the absence of senior defender Konrad Gorich. Stopping and clearing every ball that was put through in the box, the duo managed to clean up and hold down the fort for the Minutemen.

“Merk and I are both pretty good defenders,” said Saul. “But I wouldn’t say we’re the best with the ball at our feet. We just try to get anything as long as we’re not getting our hand on a shot and keeping balls out of our box.”

The team hopes that the relentless effort of these two players continues, as the absence of Gorich, who was named to the A-10’s preseason All-Conference team, weighs heavily on a team who look to rebound from an inconsistent start to the season.

The defense’s next challenge will be Wednesday, when the Minutemen travel to Connecticut to take on Hartford. Coach O’Leary will have to hope that the consistent play of the defense continues and the team can start to string together some victories.