Does the Pioneer Valley have a profiling problem? 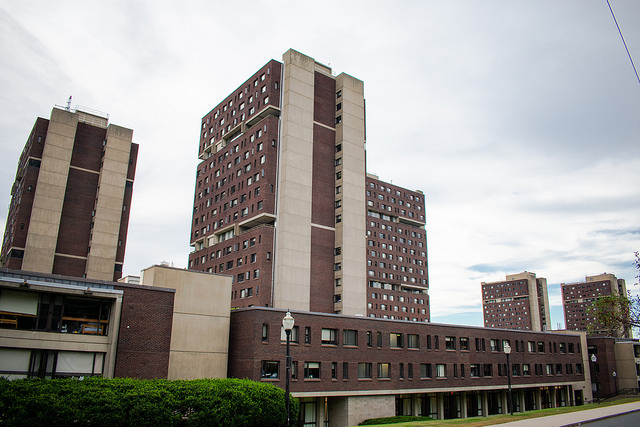 “Building a community of dignity and respect.” We see the signs littered every few feet around campus, arguably more frequently than we see campus squirrels. The University of Massachusetts, and the surrounding colleges and towns as a whole, strive to create diverse spaces where everyone feels accepted. Why is it, then, that racial profiling remains an issue in the Pioneer Valley?

All members of the UMass community received an email regarding the incident on Friday, Sept. 13: UMass Police were called regarding “a gentleman, African American, bald, red/white pinstripe shirt, dark khakis, large duffle bag on the right shoulder…[who] seemed very agitated, walking up the ramp, into Whitmore.” The man in question, Reginald Andrade, has been employed at the University for 14 years and was returning from a workout the Recreation Center.

It’s shocking to hear about racial profiling happening on our campus, but UMass isn’t the only place an incident like this has recently occurred. Over the summer, authorities were called on a Black student utilizing a common room at Smith College because she “seemed to be out of place.” The student was Oumou Kanoute, a rising sophomore at Smith who was at the school to teach chemistry to high school girls.

To the credit of the respective police departments, both incidents appear to have been handled in a professional manner. The issue here is not with the police; the issue is the fact that white people called the authorities on Black people who had committed no crimes. The calls were made under the guise of good intent – concerned citizens looking out for their community. However, the implications of the calls are much more serious. Two people, minding their business, were brought under unwarranted suspicion. Apparently, the UMass incident was not unique either: Andrade stated that he has been racially profiled on campus twice before. This raises questions as to how often these incidents really occur and, more importantly, why we don’t hear about them.

In recent years, the Northampton area has developed a reputation as one of the most liberal places in Massachusetts. This makes it all the more shocking when cases of racial profiling are reported. We like to think of the two recent incidents as isolated cases, but unfortunately, reports from residents of Northampton tell another story. Residents of color often cite out-of-touch white people and racial insensitivity as a main problem. To their credit, the police force did participate in racial sensitivity training, but only after repeated incidents of racial profiling and use of excessive force.

These statistics may seem surprising, given the reputation of the Pioneer Valley, but that may in fact be where the problem lies. People don’t see past the liberal front to the racist undercurrent that runs underneath.

The Pioneer Valley is mostly populated by white people. Of course, the area is more diverse and accepting than in years past, but the fact remains that the majority of the population is white. And yet, arrest reports show that despite being underrepresented in the population, Black people in particular are overrepresented in yearly arrests made and traffic tickets given. The issue here isn’t with one particular group of people, whether it be police, concerned citizens or minority groups; it’s with the decades-old stereotypes that say Black people are inherently suspicious. Why are Black people stereotyped as dangerous thugs and criminals? Why do people, generally white people, feed into these negative stereotypes? What can be done about it?

I am a white person. I am not oppressed, nor do I pretend to be oppressed. I also don’t claim to understand the struggle of what it’s like to be Black in America, let alone to be Black in a predominantly-white town. However, I can use my voice to bring attention to a problem that I see in the community around me. If UMass and the surrounding communities truly want to “build a community of dignity and respect,” then actual work needs to be put in. Clearly, as evidenced by last week’s incident, signs stuck in the grass around campus aren’t enough. On a smaller scale, individuals need to acknowledge the biases they hold within themselves. Acknowledge when you see actual suspicious activity rather than someone who might just be minding their business. Calling the police on every “suspicious” person you see isn’t always the best course of action. The issue of racial profiling is complicated and finding the line between racial profiling and legitimate suspicious activity can be difficult, but existing in a public space is never a crime.