Kicking off the 2018 season, the Minutewomen expect to get back on track with a new system 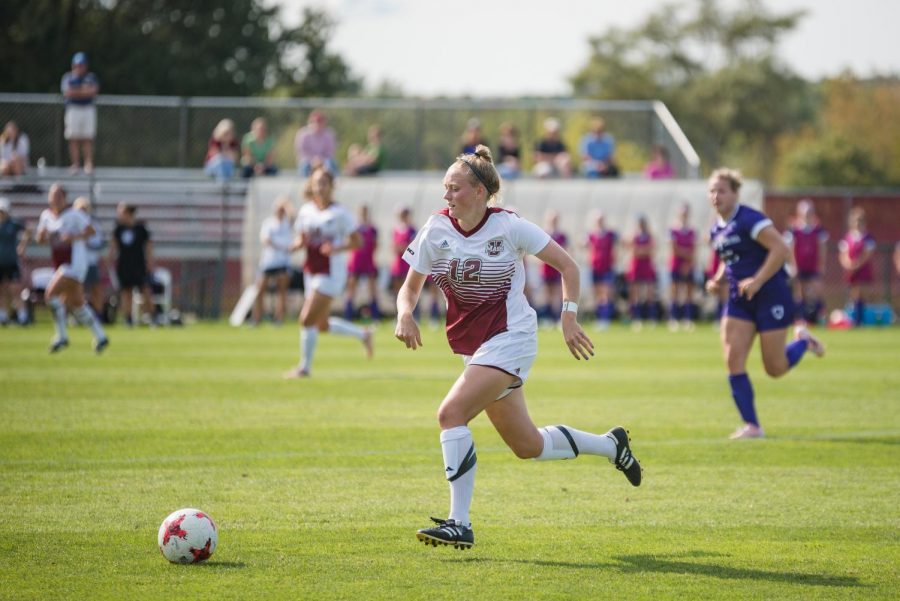 Following a subpar 2017 campaign where it finished 7-9-2, the Massachusetts women’s soccer team will have to buy into a new system if they want to improve in 2018.

New head coach Jason Dowiak takes over for the Minutewomen following previous success as an associate head coach at South Florida. Dowiak, who brought the Bulls to a nationally-recognized top 25 program, is keeping the expectations high for his new team.

“We came in kind of not knowing a lot about the group we were inheriting,” Dowiak said. “The spring was really eye-opening to see what they were capable of, so our expectations are really high for them this year.”

Dowiak draws upon his previous experience at South Florida and Florida Gulf Coast University to influence his coaching philosophy.

“I’ve been blessed to be able to work under two of the most successful coaches in the game at Gulf Coast and at USF,” Dowiak said. “I learned a lot about both the tactical and player management side. But it goes back to the expectations, that [the players] care about what we’re doing, and that they buy into the philosophy that it’s about us and not about the individual.”

“I think since we got him in January, all spring we all were getting used to the coaches, and them to us,” Kozlowski said. “Over the summer, there was so much more communication between them and the team, knowing we all wanted to win A-10’s and go to the NCAA Tournament, and we’re all on the same page, so I think it was a pretty easy transition.”

Along with a new coach and a new system, Kozlowski finds herself learning a new position this season. Kozlowski will move up from her defensive position from years past into a more attacking role this year.

“We changed formations from a 4-3-3 to a 3-5-2, so I’m more of a wingback now in the midfield,” Kozlowski said. “We drop back into defense, but it’s definitely more attacking minded, so I’m not exactly used to going up the field and being in scoring opportunities, so I’ve had to get used to that.”

Additionally, redshirt junior Ariana Comendul will be changing positions this season from goalkeeper to an outside midfield position.

Returners Erin Doster, Rebeca Frisk and Sarah Beaulieu join Kozlowski on the attack this season. Doster, who lead the team in points and goals last season, believes in a balanced scoring attack.

“I think we just need to get as many people as we can involved in scoring. I think that’s the best way to lead the team success,” Doster said. “It’s not really about individual points, it’s about getting people involved.”

One of the players who has quickly become very involved in the offensive attack is freshman Lauren Bonavita. With five points already on the season, Bonavita gives the Minutewomen a big boost off the bench.

“[Her play] has been awesome,” Doster said. “It doesn’t matter who starts or who comes off the bench, we have a scoring threat. Usually when the starter comes off on other teams, it’s just a drop in the level of play. But not with us.”

Goalkeeper Peyton Ryan is another one of the Minutewomen making big strides this season. Ryan, a senior, has so far proved worthy of the starting keeper position this season, after waiting as backup the past three years.

“Peyton has been fantastic,” Dowiak said. “She’s had to wait her time out here the past three years, but she is the reason that we are so comfortable on the field. She’s so confident with the ball at her feet and she makes some tremendous saves.”

Ryan’s stellar play this season has earned her back-to-back clean sheets against New Hampshire and Delaware, propelling the Minutewomen to a 3-2 record early in the season.

Other key players to watch for UMass this season include midfielders Sini Laaksonen and Julia Taffuri, and backs Hrefna Petursdottir, Jenna Thomas and Dani Sclafani.

UMass will look to build on its performance this season in its next matchup against Chicago State on Friday. Kickoff is at 1 p.m. at Rudd Field in Amherst.

Dan McGee can be reached at [email protected] followed on Twitter @DMcGeeUMass.