‘This talk is an anti-censorship message but more importantly an anti-hate message.’ 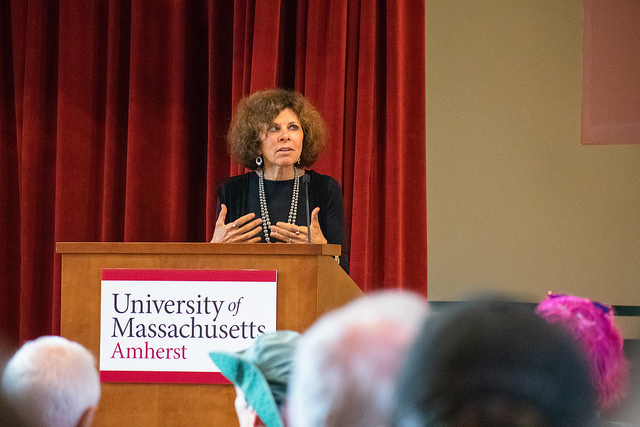 Nadine Strossen, former president of the American Civil Liberties Union and current professor of law at New York University, gave her speech entitled “Free Speech on Campus” at the Old Chapel on Thursday.

Her speech is the topic of her new book “​HATE: Why We Should Resist It With Free Speech, Not Censorship,” ​and stands as part of the Dean Alfange Lecture series at University of Massachusetts.

“T​his talk is an anti-censorship message but more importantly an anti-hate message. It’s a plea and hopefully a good persuasion that we can do better through raising our voices in counter speech rather than censorship,” Strossen said. “Counter speech is more effective and more in line with the first amendment regarding freedom of speech, and we don’t have to decide between civil rights and civil liberties.”

“The idea that we can respond to hateful speech not by repressing it but responding with counter speech holds power. Examples can include proactive education, rebuttals, rebukes and non-disruptive protests on college campuses. I cringe at the comments of college students being ‘snowflakes’ when I feel they’re being courageous,” Strossen added.

Strossen explained how although words can hurt, it is important to counter act that speech rather than censor it.

“In terms of potential harms from hate speech, I understand words can hold great power and can hurt deeply. I know that words could possibly incite someone to partake in a hateful act, but I believe the net impact of people’s outpouring of support for the opposition, and the vigorous criticism and denunciation for those taking part in hate speech can drown them out,” Strossen said.

Patrick Hurley, a junior English major, discussed his interest in the event.

“I came in part due to my interest with the ACLU and their actions and interpretations of current events. I found the talk really interesting and informative as well,” Hurley said.

“I think it’s vital and in some ways courageous for a speaker to come to UMass and extoll the importance of freedom of speech, inquiry and thought. My only regret is that not all 25,000 plus members of this community were here to hear this talk,” Newman said.

Jesse Rhodes, chair of the political science department at UMass, had the opportunity to introduce speaker Nadine Strossen at the event.

“This was a really exciting opportunity for students, alumni and faculty to hear from such a prominent civil liberties attorney on such an important issue, especially on college campuses,” Rhodes said.