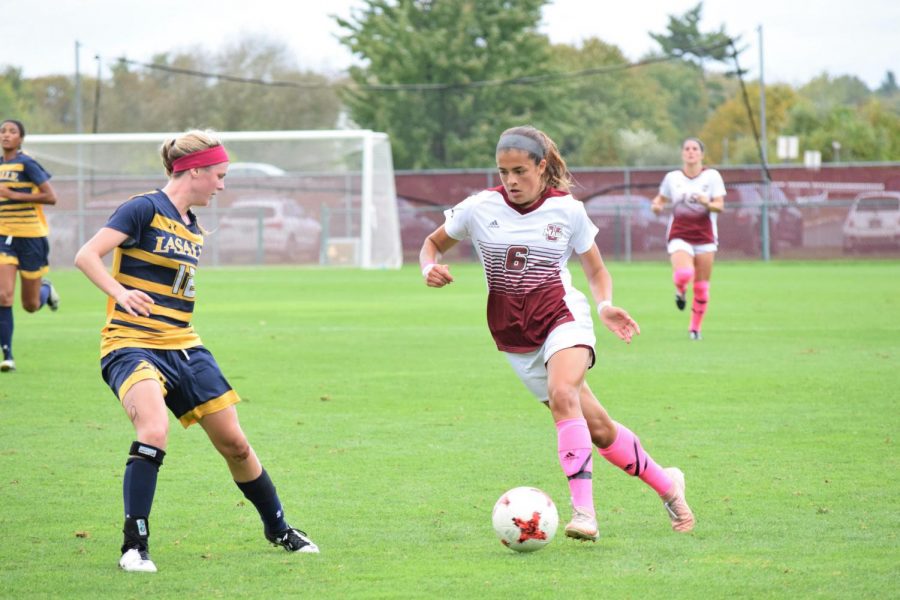 Leading the offensive attack were junior Rebeca Frisk and sophomore Kelly Marra, who netted three and two goals respectively. Frisk, whose effort earned her a hat trick in the game, recieved high praise for her hard work from UMass coach Jason Dowiak after the game.

“We’ve been doing a lot of extra work with Rebeca in front of the goal,” said Dowiak. “I think it was just a mentality switch for her. She had two goals against New Hampshire and she is an excellent finisher. I just think her mentality changed today for her.”

Frisk, who only tallied one goal all last season, already has five through six games this year. She credits that to the mentality of the program changing.

“The whole program has changed,” said Frisk. “The girls, the attitude, obviously the whole coaching staff. Everything is going up from here and this is definitely not where we’re going to stop. You haven’t seen nothing yet.”

Despite coming out to a slow start offensively in the first half, UMass’ ability to control the ball and dominate time of possession in the offensive third allowed the Minutewomen to get chances early. Frisk’s first and second goals in the 40th and 42nd minutes put the Minutewomen up 2-0 at the half. Both of Frisk’s first two goals were assisted by freshman Mia Carazza.

“We didn’t adjust too much,” said Dowiak about half time changes. “We just asked the girls to be cleaner. The goals came because they started to be more energetic in how they were attacking.”

The energetic attacking play from the Minutewomen allowed them to wear down the Cougars’ defense and goalkeeper and provided them the opportunity to get many players involved in the attack. Sophomore Signe Schioldan netted her first career goal off an assist from Frisk in the 55th minute following by Frisk’s third goal of the game in the 58th and Lauren Bonavita’s third goal of the season in the 59th.

Ari Comendul, who in the 71st minute added her first goal since her switch to midfield this season, acknowledged UMass’ physical brand of soccer.

“There has not been a shift where I’ve been out there and someone on the other team didn’t have to sub off for an injury,” said Comendul. “But they’re not all fouls, so I guess they just can’t take it.”

By the time Kelly Marra joined the scoring action in the 80th minute and again in the 84th, UMass had run away with the game. With assists coming from six different players, the Minutewomen were able to play an all-around offensively complete game.

“We know that we’re 22 strong,” said Comendul. “People are going to see the stats and think that we just kept the starters out there to demolish them, but everybody played a lot today and we’re confident in that. We have a lot of depth on the team.”

The win marks the Minutewomen’s largest margin of victory since September 2, 2000 when they defeated Albany 9-0.