Johnston: UMass has chance to prove themselves at Ohio

Minutemen are 0-3 on the road this year 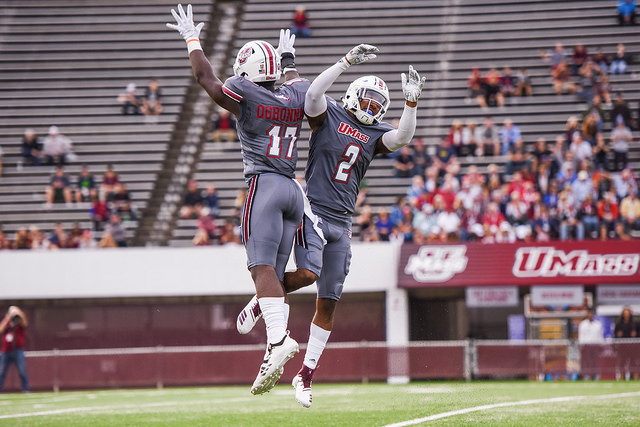 One win might be all the Massachusetts football team needed to get back on track.

While Charlotte may not have been the most daunting of opponents, the Minutemen handled them soundly behind third string quarterback Michael Curtis. Much of that was due to a lightning fast start and a defense that was able to force turnovers and get the 49ers off the field.

After back-to-back blowout losses to Georgia Southern and Florida International, the team was embarrassed, but bounced back in a big way against Charlotte. We saw last season how a single victory can change the momentum of an entire season. A season ago, the Minutemen dropped the first six games before a blowout win over Georgia Southern turned their season around.

UMass was clearly displeased with another poor start. Players like Andy Isabella spoke out strongly about how they needed to improve. The results showed this past week, with the Minutemen being the far more fired up team and playing with the energy needed to win a football game.

That same focus will be needed this week in Ohio, as the Bobcats come in with a prolific offense that is averaging 33 points per game. When the two teams met last year, it was a shootout that saw Ohio come out on top, with 108 total points scored in the game.

With the way the two teams have played this season, it would be no surprise if both teams are able to light the scoreboard up again on Saturday. While the Bobcat offense has been explosive, their defense has proved to be vulnerable, giving up 37 points a game.

UMass hopes to get both Andrew Ford and Ross Comis back in the lineup this week after they suffered injuries in the FIU loss, with coach Mark Whipple saying they should be ready to go this week. While Curtis filled in well in his first career start, the Minutemen would be best suited with their full arsenal of quarterbacks Saturday if they want to stay in the game with Ohio.

Ohio coach Frank Solich knows how dangerous the UMass quarterbacks are when they are fully healthy.

“They’ve got a system and their quarterbacks are fit to that system,” Solich told members of the local media. “They’re all mobile guys who are all capable of running, scrambling, making plays on the run. You can design a run for them, if you want. It really makes no difference which quarterback is in there in terms of system of offense that we utilize.”

One way UMass can keep the Bobcat offense at bay is running the ball. Ohio quarterback Nathan Rourke is a talented player, and the easiest way to stop him from scoring would be to keep him on the sideline as much as possible.

“They have a good team, they have a great quarterback and they have all their guys back on offense,” Whipple said of Ohio after the Charlotte win. “We have to get a good plan together and make another road trip and grind a bit more than we have on the road.”

The key word there is grind – his team didn’t do that in their previous three road games, and the results speak for themselves.

UMass has a great chance to turn its season around Saturday and start heading in the direction it envisioned itself going in the preseason. It’s on them to not allow another slipup to happen.