Johnston: UMass has improved, but still has a long way to go 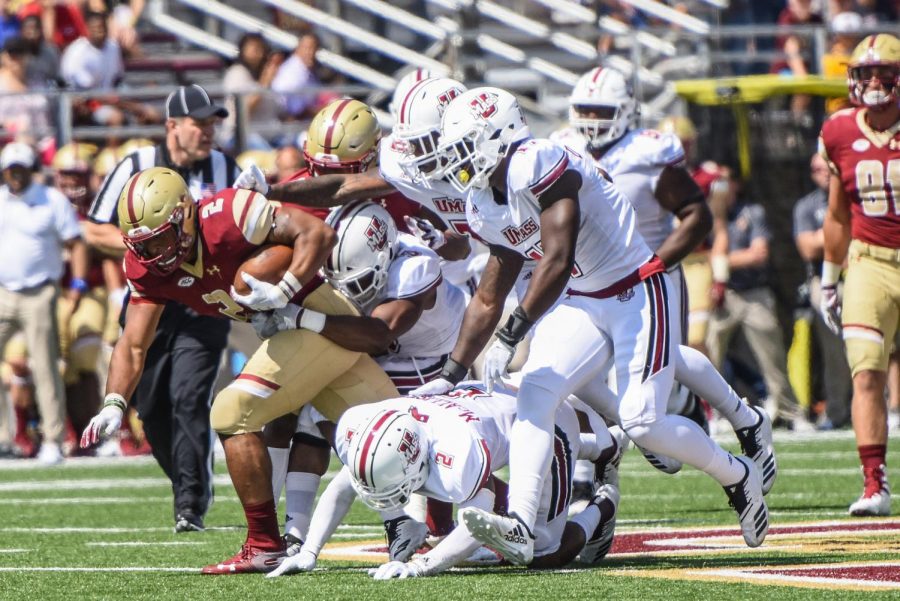 The Massachusetts football team was served a reality check Saturday at Alumni Stadium in Chestnut Hill. After dominating its season opener against FCS Duquesne, the Minutemen were blown out by Boston College, falling 55-21.

It looked as though this could be the year UMass takes a leap forward, and a game with the Atlantic Coast Conference Eagles was a perfect opportunity to prove that these aren’t the same Minutemen of old. Instead, UMass looked like it didn’t belong on the same field as BC.

In the first half alone, the Eagles outgained the Minutemen 455 to 146 in total offense. UMass was 0-6 on third down and failed to convert a fourth and one in its own territory, setting up a BC team that already held a 21-7 lead with a short field.

Quarterback Andrew Ford was never able to get anything going in the passing game, going 9-for-18 for 78 yards and two interceptions while the Eagles’ front was able to penetrate and hold UMass to a mere two yards per carry.

The defensive side of the ball wasn’t any better as BC running back AJ Dillon, the preseason ACC Player of the Year, asserted himself early on. The 245-pound back rumbled for 37 yards on the opening drive, capping it off with a 15-yard touchdown reception.

The Eagles kept the pressure up by going tempo and with UMass having to respect the run, went with play-action that continued to give the Minutemen fits. This resulted in chunk plays and quick BC scores that looked almost effortless. On the Eagles first six touchdown drives, the longest took a mere 3:15 off the clock.

“We’ve played big teams like this before,” linebacker Bryton Barr said. “We just needed to get this one out of the way and we got it out of the way early in the season. That’s the last time that will happen.”

While this loss hurts, this is the attitude UMass needs to have. BC is a power-five team with a bunch of NFL talent scattered on its roster and will be a tough out for any opponent it faces this season. The Minutemen season isn’t over because of a tough loss in week two either. UMass has been improving the last few seasons, and there is no reason to believe that they won’t continue on that path despite what Saturdays results showed.

“We weren’t as good as everyone thought we were last week,” UMass coach Mark Whipple said, “and we aren’t as bad as everyone thinks we are after today.”

“The ball bounced pretty good for them today,” Whipple said. “They’re good enough. They don’t need any help. We didn’t help ourselves. You learn a lot about yourself in these kinds of things.”

While UMass continues to build its program up, today’s defeat showed just how far the Minutemen still have to go in order to reach the level of play that will earn them respect around the country.