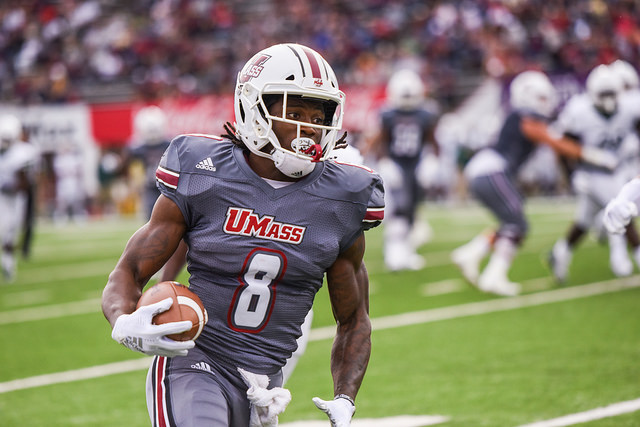 From the initial kickoff between the Massachusetts football team and Charlotte, Marquis Young’s name was reoccurring throughout McGuirk Alumni Stadium.

In the Minutemen’s (2-3) second win of the season, Young wasted no time spearheading the momentum with a 93-yard kickoff return to open the game. Bursting through a dime-sized gap, Young was gone before the 49ers (2-2, 1-0 Conference USA) even realized he had broken through, giving UMass a much needed advantage to start.

It was the first special teams touchdown for the Minutemen since James Allen registered a 97-yard kick return against Bowling Green in 2015. The senior registered a team-high 74 rushing yards in the 49-31 victory over the 49ers. He also had personal-best three touchdowns to round out his performance.

“I thought it made a statement,” coach Mark Whipple said. “The guys were ready to play and it went untouched, we talked about special teams and we worked those hard on Monday night in full pads.

“When you have a weapon like (Young) has, you don’t have to block him great you just have to get in the way and our guys did a real good job.”

“It felt really good,” Bryton Barr said of having the early lead. “Me, personally, I like to start the game off on defense. I hate waiting around.”

Aside from his opening play, Young then carried out the third touchdown of the day after Charlotte was called for pass interference. Quarterback Michael Curtis, who stepped up behind injured Andrew Ford and Ross Comis, considered the start of the game to “go the best possible way.”

By the end of the first half, Young had registered 18 reception yards and 20 rushing yards as well as two touchdowns. Although it felt as though Young was given the ball every other play, he thinks he contributed just enough.

With just under 15 minutes remaining in regulation, Young received the hand-off from Curtis and faked into the scrum before bolting toward the right sidelines to take off for a 43-yard touchdown, pulling UMass ahead 48-17.

The fourth quarter play thrusted the Minutemen out of reach, despite the 49ers clawing back with two touchdowns in the final handful of minutes.

UMass has struggled offensively early in the last three games, consistently ending up on the wrong side of the first touchdown. Young’s kickoff return counted as the second time UMass has scored first this season, giving it a 2-0 record when scoring first this year.

“There was improvement all the way around. A lot of camaraderie,” Whipple said. “Just excited about the win for the players.”