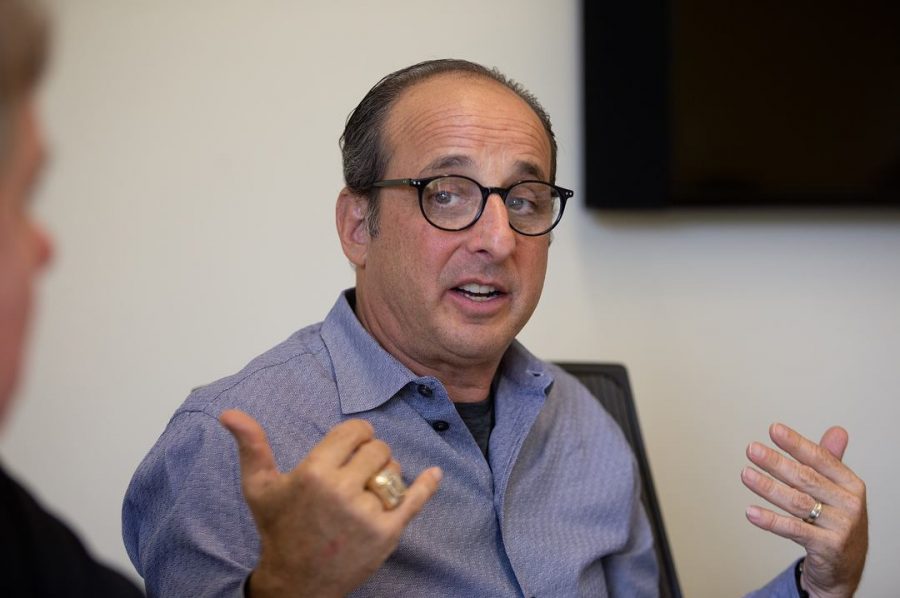 Multi-award-winning sports photographer Andrew Bernstein spoke to a crowd of roughly 30 students about his career with NBA Photos, his favorite moments as an NBA photographer and an upcoming project in the Integrative Learning Center on Sept. 10, 2018.

Bernstein first got his start as a photographer for the Massachusetts Daily Collegian in the mid-1970s, where he captured photos of major sports events on campus. From there, he then went on to take his photography skills further where he enrolled in the Art Center College of Design in Pasadena, California. During his time at the Art Center, he also received on-the-job training at Sports Illustrated, where he photographed the Los Angeles Lakers and Sacramento Kings, along with volleyball, tennis and indoor soccer.

At this point, it was clear that Bernstein was headed toward a career in professional sports photography, but it wasn’t until 1983 where he met Terry Lyons, who worked for the NBA’s public relations firm. Lyons assisted Bernstein in getting his sports photography into the mainstream.

“Terry and I had this great kind of long-distance relationship where he would give me credentials, go to Phoenix or to go to Golden State or to Utah or wherever and I would come back with photos and then he would call and say ‘What do you got on Magic [Johnson], what do you got on [Larry] Bird?” Bernstein said.

But as the NBA grew and sports photography became more competitive, Bernstein and Lyons quickly realized that the “mom and pop” shop they developed might not match up to the big leagues. They soon then pitched an idea to the NBA to create a division called NBA Photos, which is now based in the NBA office in Secaucus, New Jersey.

By this time, Bernstein had become a contract photographer for the NBA and was in charge of photographing both the Lakers and the Los Angeles Clippers.

Bernstein then shared some of his favorite photographs that he’s taken throughout his career. One of them was when Michael Jordan won his first championship in 1991 against the Los Angeles Lakers. In the photo, Jordan is holding the championship trophy against his forehead, almost moved to tears by the recent win.

Bernstein says he still gets emotional over the photograph, calling it iconic.

Another one of Bernstein’s favorites is a picture he took of Kobe Bryant recovering from an injury in his locker room. In the photo, Bryant has both feet in a tub of ice water, attempting to ease the muscle pain. Bryant looks calms and in deep thought. Bernstein recalls the anxiety he faced taking the photo, as he was nervous that the shutter clicks of his camera would disturb Bryant.

This then led Bernstein to speak about his latest collaboration with Bryant, a book of photos titled, “The Mamba Mentality: How I Play.”

In the midst of his lecture, Lyons stood up to speak about how Bernstein was able to capture the intimate moments of the player’s lives, which he credits to Bernstein’s ability to maintain close relationships with players.

Toward the end of the lecture, Bernstein took questions from the crowd, and addressed a question about the effects of social media on his job.

Alvin Buyinza can be reached at [email protected] followed on Twitter @abuyinza_news.