Developing Minutewomen will be key factor during weekend in Philadelphia 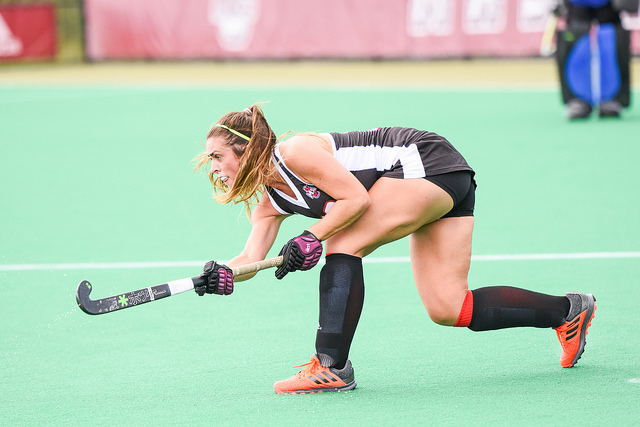 In the wake of injuries and absences to several veteran players, the Massachusetts field hockey team has been dependent on newcomers during an up-and-down start to the season. The Minutewomen will rely on those younger players as they head to Pennsylvania this weekend for an important conference doubleheader.

Where UMass (3-5, 1-0 Atlantic 10) needs players to step up, coaches and veteran players anticipate newcomers on the team to grow into the talent they have flashed so far.

One younger player who has produced is freshman Sophie Johnson, who has played in every game so far this season. Over the last four games, she has hit her stride, averaging over 53 minutes a match and managing a shot on goal against Lock Haven on Friday.

Newcomer Clodagh Moloney stepped up against A-10 opponent Lock Haven, as well. Although she is a graduate student, this is Moloney’s first year with the Minutewomen. She has certainly asserted herself, playing a full 70 minutes in the first six games of the season, culminating in an 84-minute grind during UMass’s first conference victory.

Her teammates and coaching staff will rely again on her dependability this weekend in Philadelphia. Coach Barb Weinberg has extensively utilized Moloney, Johnson and other new Minutewomen during the beginning of the schedule so that they could grow as players and prepare for conference play.

Moloney and the Massachusetts defense has faced some very talented — and even ranked — teams so far this season. While there is still work to be done, another freshman star has emerged on defense: goalie Johanna von dem Borne.

Von dem Borne, a first-year student from Essen, Germany, has accumulated 63 saves in eight starts with a .692 save percentage.

“I expect her to continue to do what she’s been doing,” said Weinberg. “It would be great if we could prevent a lot of those shots so Johanna’s not having to come up huge with those saves in the back, but she’s been keeping us in a lot of games and we expect her to keep doing so. She’s had a great week at practice.”

Von dem Borne’s feats on the field are possible because she has adjusted during practice. Her teammates aid her with post-practice activities, developing strategies and working past the language barrier.

“Sometimes we have meetings with just the defense… They say what they want to do, I say what I want to do and we put it together,” von dem Borne said.

Other freshmen who have gotten involved early on include dynamic forward Chloe Hillier, midfielder Mus Defauwes from the Netherlands, and midfielder Katherine Furry.

“We were able to roll the bench a lot against Harvard and we’re going to continue to do the same this weekend,” Weinberg said. “Our freshmen are going to play a huge role.”

UMass takes on La Salle on Friday, followed by No. 16 Saint Joseph’s.

Justin Ekstrom can be reached at [email protected] and followed on Twitter @JustinJEkstrom.