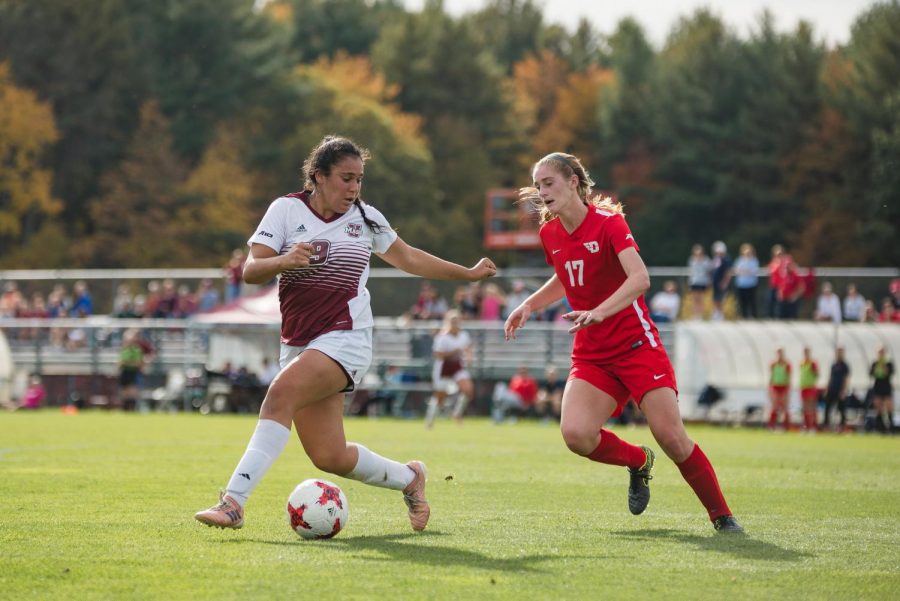 New University of Massachusetts women’s soccer coach Jason Dowiak is not afraid to employ outside-the-box strategy and creativity that should be expected in Sunday’s match against Eastern Michigan.

“We’re going to look at a couple different players in different positions,” said Dowiak. “We’re looking at it as an opportunity to try some things before A-10s and throw some different looks at our conference opponents.”

The matchup against Eastern Michigan (4-3) serves as UMass’ (4-2) final tune-up before it begins its Atlantic 10 schedule later next week. This allows for some experimentation and creativity on the side of the UMass coaching staff.

However, this does not mean the team will lack any of the energy that has seen the Minutewomen emerge victorious in three straight matches.

“Nothing is going to change,” said Rebeca Frisk. “We’re going to go into this game like it’s any other game, and it’s just going to come down to who wants it more.”

On top of trying new lineup combinations and playing certain players in new positions against the Eagles, the Minutewomen will also employ a somewhat unique playing style.

Traditional soccer strategy has a team defend their own half, or even defensive third of the field, before trying to secure possession of the ball with their center backs and start their attack from the back. UMass is taking a different approach this year.

Rather than sit back and allow opposing teams to control the ball, the coaching staff emphasizes pressuring the opponents high upfield, ideally winning the ball with their forwards.

This approach played a key role in last week’s 8-0 blowout of Chicago State, with two goals coming directly off pressure from Minutewomen forwards.

“It starts from the top,” said defender Paige Kozlowski on the key to the team’s stout defense. “We have a really great press and it makes it easier on our defenders. We force the other team to play a lot of long balls that we can easily pick off.”

With Eastern Michigan heading into Amherst looking to keep a win streak going, it will likely come down to UMass’ success at dispossessing opponents to keep its own streak of three straight shutouts alive.

“Every game that we have maintained at least 60 percent of the possession we have won,” mentioned Dowiak. “Our goal is to set that tone again.”

“We’re playing as one unit,” said goalkeeper Peyton Ryan. “It starts from the top and we’re all defending as one team.”

Ryan has not allowed a shot to get past her in the past three contests, but credits the team’s defensive strategy for keeping shots away from her.

The Eagles also rely on controlling the ball as a key to their success. Their possession ultimately leads to more chances to score, reflected in the Eagles’ 123-98 shot advantage over opponents so far this season.

“They are a very possession-oriented team as well,” said Dowiak of Sunday’s opponent, “and I think it is going to come down to who manages the ball better and creates the most chances.”

UMass hopes its able to successfully trap Eastern Michigan high up the field on Sunday as a part of winning that possession battle.