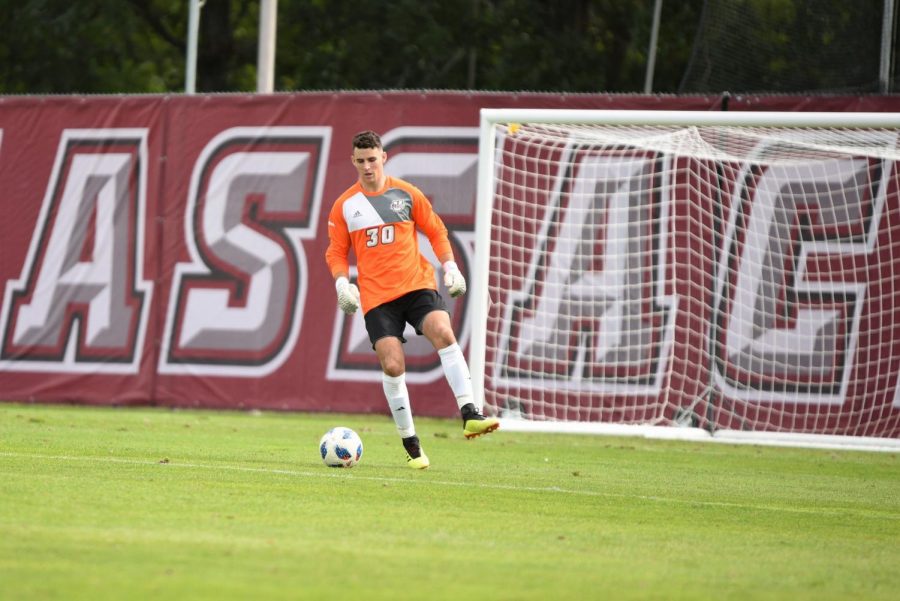 After putting five goals past Central Connecticut State at home a week ago, the Massachusetts men’s soccer team fell 1-0 to Dartmouth in a grinding double overtime defeat to open up a three-game home stand Saturday.

Without senior defender Konrad Gorich and All-Conference forward Davis Smith, the Minutemen (4-3-2) never quite found their footing, but nonetheless battled relentlessly throughout the match.

“I’m very proud of our guys, [Dartmouth] are a top team,” said coach Fran O’Leary. “They’ve gone to the NCAA tournament each of the last four years. I think we’ve gone four times in our history. We’re playing a top team and I thought we stood toe-to-toe with them, come away feeling a little disappointed that we didn’t get something out of the game, I really feel for our guys [in light of] their effort today. They competed from the first minute to the last minute. They deserve something out of the game, I really feel sorry for our guys.”

In total, both teams registered 43 fouls on the afternoon: 28 against Dartmouth (1-4-2), 15 against UMass. It was an intense, physical contest with a few heated disputes and scuffles here and there.

“Some games are more physical than others,” O’Leary said. “It was just two competitive teams. They’re a well-coached team and they’re just two teams battling for possession. It was a good, fair, hard game.”

Despite conceding the game-winner, sophomore goalkeeper Marvyn Dorchin chipped in an admirable performance to help offset the absence of Smith and Gorich. Dorchin notched five saves on the day, including one at the end of regulation on a shot right in front of the net to force the game into overtime.

Junior defender Ryan Saul played well for the Minutemen, stepping up in Gorich’s absence and anchoring the back unit. Another name to note was Brandon Merklin, who cleared the ball off the goal line in the 17th minute to deny what should’ve been a goal for the Big Green.

In the 106th minute of the match, Dartmouth’s Justin Donawa delivered the winner, capitalizing on a breakaway opportunity by striking one past an exposed Marvyn Dorchin. Donawa’s game-winner gave Dartmouth its first win on the season, while handing UMass its second loss at home.

It was a tough way to cap off such a hard-fought contest, but UMass looks to regroup by Tuesday as the Minutemen take on New Hampshire for what will be their last non-conference game of the regular season.

Kickoff on Tuesday is scheduled for 4 p.m. at Rudd Field.

Ben Painchaud can be reached at [email protected]