Student coalition works to ‘get out the vote’ before November election 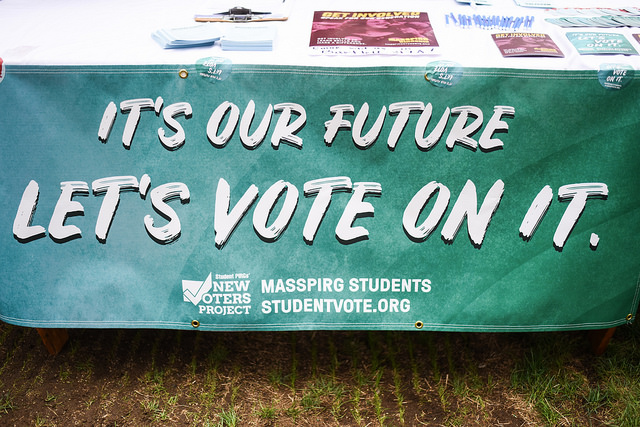 By Kathrine Esten and Irina Costache

In an effort to get students out to vote in the midterm elections, a coalition of student organizations at the University of Massachusetts are undertaking the challenge of getting the student body registered and excited about voting.

“We want to register and turn out as many students to vote as possible,” SGA President Timmy Sullivan said. “We believe it’s imperative that we make the student voice heard in this election and position students as a powerful voting bloc in our district, in the state and in the country.”

“We also want to transform the culture around voting and let students know that they can affect real change in the world through electoral organizing,” he added.

Student voter registration efforts have been in effect from the start of the semester; during move-in weekend and convocation, CEPA and the SGA hosted registration tables in the Southwest Residential Area and outside Franklin Dining Commons. MassPIRG led another table at the weekly farmer’s market on Goodell Lawn last week.

While all groups intend to work through the state deadline on Oct. 17 to register voters, their efforts will culminate in a Sept. 25 voting fair on Goodell Lawn for National Voter Registration Day. At this event, the coalition of organizations will be bringing in local candidates to speak about their policy stances.

UDems President Sonia Guglani explained that bringing in the candidates was for the benefit of students who may not be familiar with the races they are voting in. Noting it was difficult to “[educate] people on why it’s important to vote if they haven’t been educated before,” Guglani said she plans to further student engagement in the elections through weekly club meetings and public events.

Gabriela Colmenares, a MassPIRG vice-chair and campaign coordinator for the New Voters Project, emphasized the importance of registering students regardless of what candidates or political parties they might support.

“[Our generation] is the largest and most diverse potential voting group in the whole United States, so our campaign is really centered on educating how important voting is, educating on the ballot questions for this year and making sure that people know they can exercise their right to vote,” Colmenares said.

James Cordero, CEPA’s co-campaign and advocacy coordinator, said that roughly 300 students have been registered to vote in drives so far.

“Voter registration is key to building student power, and as CEPA’s mission is to empower and teach students to advocate for themselves, we feel registering them to vote is a step on that pathway to self-actualization and liberation,” Cordero added.

While each group had their own projected registration goals within their organization, ranging from 100 students for the UDems to CEPA’s goal of 2,000 to 3,000, all emphasized the importance of registering as many students as they could.

Amherst Town Clerk Margaret Nartowicz said that while it’s impossible to predict how many new student voter registrations will be processed through the town clerk office for the Nov. 6 elections, they can “reasonably anticipate 1,000 or more, based on prior state election history.”

In order to make voting more accessible to students on campus, Nartowicz is working with the University and SGA to bring early voting to UMass, an effort which the coalition’s leaders say will help increase turnout rates.

Early voting, according to a 2014 Massachusetts law, requires towns and cities to provide early polling locations beginning on the 11th business day preceding the general election until the close of the business day preceding the business day before the election. In 2016, then-SGA President Anthony Vitale and Tony Maroulis , the UMass executive director of external relations and university events worked with select board chair Alisa Brewer to implement Early Voting on the UMass campus in the 2016 fall election.

“We’re working with UMass SGA President Timmy Sullivan and [Maroulis] on additional early voting sites on campus and will have more information on that within the next two weeks,” Nartowicz said.

Sullivan said he has been in meetings with the town since August to secure an early voting location on campus. While the location has not yet been determined, he announced that the campus “will likely have early voting on campus from Oct. 24 through Oct. 26.”

Brewer noted that while much of the election focus this year has been on national and international politics, many political decisions made at a local level, such as retail marijuana locations, rental registration and noise bylaws, do directly affect students, making it critical that students get out and vote.

Student leaders in the coalition expressed similar sentiments, with Cordero saying that voting is a “means of demonstrating power,” and warning that a low turnout could result in leaders who aren’t representative of the people as a whole.

“[Voting] is the one way that you can make your voice heard,” Guglani said. “You have a say, and you might think it’s small, but it’s not. All those votes add up at the end of the day.”

Carly Bishop, the vice president of College Republicans, said that being an engaged citizen is important because “we are so fortunate to have a voice, especially when others don’t.”

“It’s important to take advantage of that and to use our representation for good,” she added.

“We need to not only fall into the practice of voting, but also recognize that we can be the decisive voice electing candidates who will make legislative decisions that impact our lives,” Sullivan said. “Though all voter registration initiatives are strictly nonpartisan, we want students to understand the connection between their vote and the decisions that are made in the municipal, state and federal legislatures.”

Students unable to attend the various registration tables and events held on campus are encouraged to register at the Town Clerk’s office from 8:00 a.m. to 4:30 p.m. during the work week and online at https://www.sec.state.ma.us/ovr/.