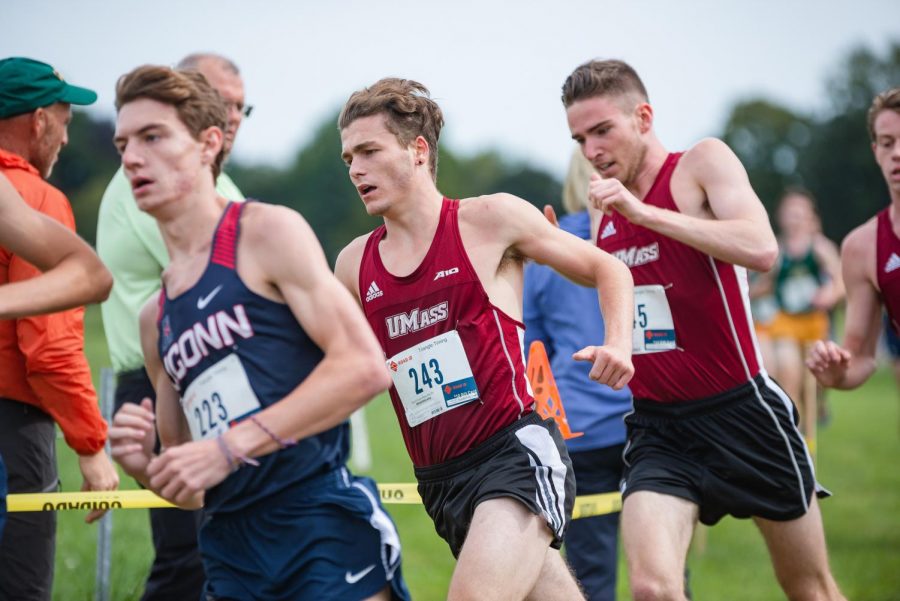 On Saturday afternoon, the Massachusetts men’s and women’s cross country teams opened their 2018 campaign with the Minuteman Invitational at the UMass Cross Country Course. In what counted as their only home meet of the season, UMass welcomed the Connecticut Huskies and the Vermont Catamounts.

After a fourth place finish behind both UConn and UVM at last year’s invitational, the Minutemen got their revenge Saturday as they finished first place overall. UMass placed five runners in the top 10, with two others placing 11th and 13th.

“It was a great start for our team,” said first-year coach Tim Ritchie. “Anytime you can be in a position to win and do so, it gives the guys some confidence and pride in what they’re doing.

“We run this home meet every year. All of our returners improved relatively to where they were last year.”

Junior Dawson Bathgate finished the six-kilometer course first for the Minutemen in a swift 19 minutes, 32.2 seconds, good enough for a second place finish behind Eric van der Els (19.25.2) of Connecticut.

With this solid team performance, the Minutemen scored 25 points and edged out the Huskies by nine points for first place. The Catamounts struggled to find their footing, and had just one runner in the top 10.

For the second straight year, the UConn women’s cross country team came out on top in the Minuteman Invitational after a pack of Husky runners finished less than a second apart from each other to clock in from fourth place to seventh place. The Minutewomen placed third overall behind Vermont by just nine points.

Leading UMass was sophomore Caroline Clark, who finished the 5k course third overall among 47 runners. Her time of 18:25.28 was a 15-second improvement from last year’s meet.

Alexina Hurley (18:34.97) and Serena Sarage (18:44.21) also finished within the top 10, taking eighth and 10th respectively.  Hurley won Atlantic 10 Rookie of the Week for her performance in her collegiate debut. Senior Brook Hansel (18:56.16) finished behind a string of four UConn women for 15th place.

O’Leary was one of the top distance runners last year as a freshman, but an injury that she sustained last winter kept her from competing in indoor and outdoor track.

“She had a very slow recovery. Her time last year on this course would’ve put her in second [place] in the meet on Saturday,” said coach Julie LaFreniere.

LaFreniere went on to say that she expects O’Leary to be “moving up” each race as she gets more and more comfortable with racing again.

Both teams will participate in the Coast to Coast Battle in Beantown, heading to Boston on Sept. 21. The meet features over 25 different schools, including powerhouses such as Syracuse and Providence.

There will be a five-kilometer course for the women and an eight-kilometer run for the men. It will take place in Franklin Park with the women starting at 3 p.m. and the men at 3:45 p.m.