UMass defense has all the answers against Davidson 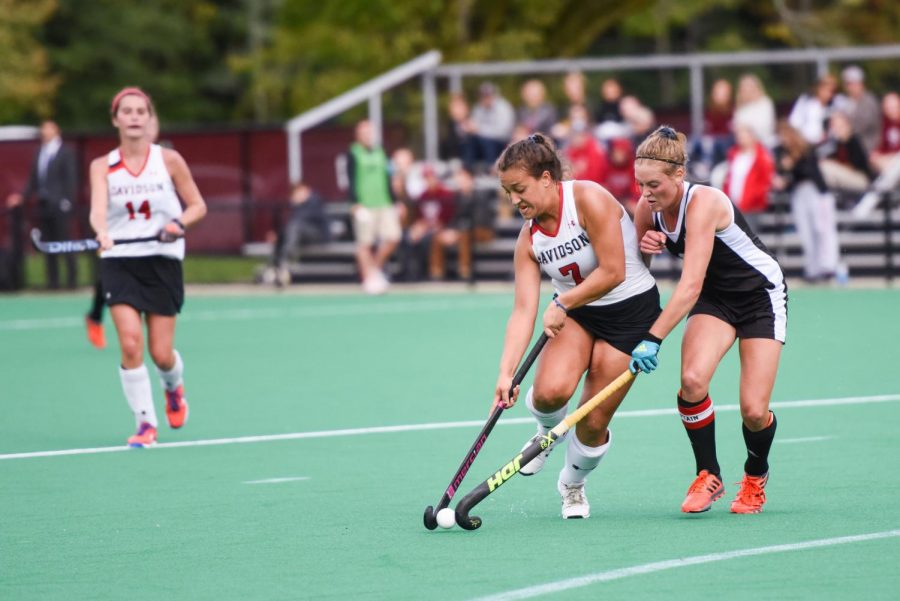 The Massachusetts field hockey team pulled out a victory against Davidson this Friday in a game that was decided in the backfield. The Minutewomen dominated the ball control in the midfield with little resistance, while giving the Wildcat attack nothing to work with.

After a 5-0 loss against Saint Joseph’s, on Sunday UMass (5-6, 3-1 Atlantic 10) had a long week focusing on itself — both as a team and individually. The Minutewomen reflected on bettering their defensive efforts, specifically how to connect with their midfield and forwards on transitions to minimize their time defending.

A shutout against Davidson (3-6, 1-1 A-10) was just what the team was looking for. UMass was able to stop nearly every opposing attack with aggressive play that lead to winning turnovers and free balls, the aggression matched by timely patience; only stepping up when the time was right.

“It was a week of preparation where we focused on us and not the other team,” said coach Barb Weinberg. “We worked a lot on our midfield movement so we would be able to use our middle players more, and we worked hard on our press.”

While the Wildcats raised their intensity levels during the second half, the opening period was completely one-sided. Davidson was unable to get a single shot on goal off in the first half.

“It really started with the press, when we were pressing their defense,” said sophomore Bailey McNamara. “When it came down to our end we knew where it was going by forcing them to our right side, our strong side. We were able to anticipate well… we had high energy, intensity, and were stepping to the ball.”

Meanwhile, UMass’ first goal came off a run in transition, originating from a caused turnover in its defensive half. In comparison to Davidson’s three shots and one penalty corner, UMass shot 21 times and earned eight penalty corners thanks to its defensive efforts to gain possession and work the ball seamlessly up the field to the forwards.

Defender Clodagh Moloney and Jamie Melley stood strong in front of their net for most of the game, joined by fellow defenders Georgie McTear, Sophie Johnson, Bailey McNamara, and others throughout the game.

Goalkeeper Johanna von dem Borne, who has had to keep her team in many games this season, only had to make one save in the shutout effort, and was replaced by redshirt freshman Megan Davies once UMass went up 3-0, the game’s final score.

Keeping the ball out of the back proved key, as it maximized the time UMass could use its talent up top. Defenders McTear and Johnson even scored in the second half, proving the team’s scoring can come from all parts of the field.

“We were winning the ball when we wanted to in our press and were able to counter attack,” explained Weinberg.

As the middle of the second half came around and the score steady at 2-0, UMass was faced with a few tight situations but proved strong in escaping each one.

With about 22 minutes left to play and on Davidson’s lone penalty corner, the Wildcats were inches away from scoring from a rebound that hit the crossbar. Fortunately for the Mintutewomen, they were able to quickly gain possession and move the ball back into the attacking third.

Thanks to a strong press and aggressive play in the backfield, UMass is now 3-1 in conference play.

The Minutewomen aim to bring the same intensity and skill level on Sunday against non-conference opponents Providence at home at 1 p.m.

Justin Ekstrom can be reached at [email protected] or @JustinJEkstrom on Twitter.