Minutewomen regroup after LHU ties it at the end of regulation 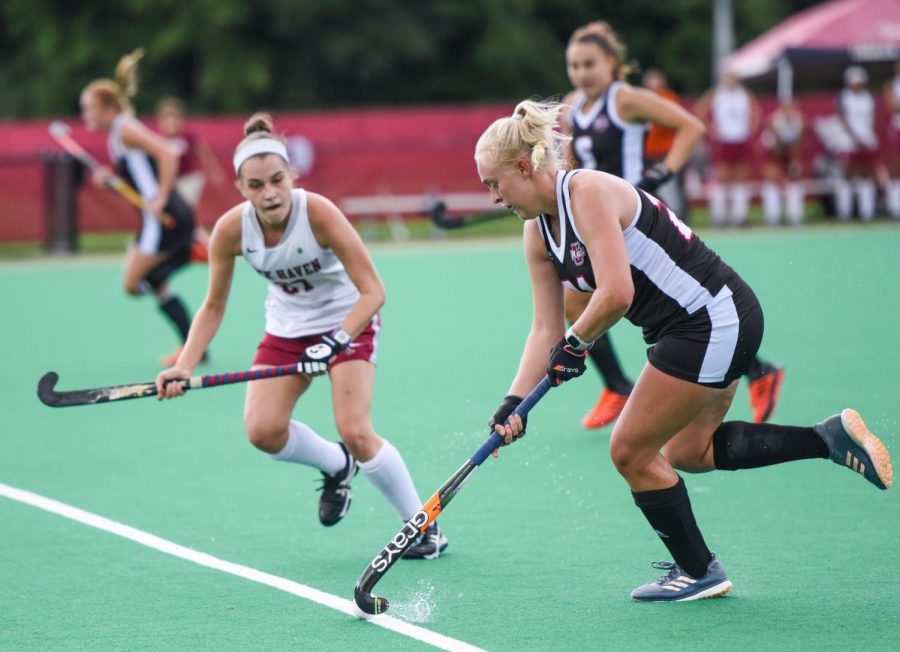 Antonet Louw takes the ball upfield as Lucy Cooper (#6) looks on. Louw and Cooper teamed up for the game-winner.

With one minute and one second left in this Friday’s field hockey match, Lock Haven battled back to force overtime, less than two minutes after Massachusetts celebrated its biggest goal of the game. As the clock rang to signal the end of regulation, the score remained tied at 3-3, and the Minutewomen needed two overtime periods to come away with the 4-3 win.

As the game closed, it was anyone’s game. LHU and UMass (3-4, 1-0 Atlantic-10) traded runs down the field, but for every LHU turnover, there was a UMass pass out of bounds, and for each opportunity at one net, there was another at the other end.

Going into the 67th minute, however, the Minutewomen dashed the ball up the field in a few passes to eventually earn a penalty corner. Forward Lucy Cooper scored her first goal of the season off the second rebound of the corner, evoking the loudest cheers of the game.

Cooper tapped the ball into the net off the ricochet of UMass’s Clodagh Moloney, who played quality minutes on defense throughout the game.

Unfortunately for the Minutewomen, the Bald Eagles pulled off a quick turnaround by crashing the UMass circle, immediately drawing a corner. No rebound was needed, as Tamia Roach’s blast tied the game at three.

“That’s one of the most deflating things,” said Cooper. “You literally just need to pick your head up and work hard for the next five minutes.”

The end of regulation fit a pattern for UMass. They would have a lead erased by Lock Haven minutes after scoring, then take it back following clutch goals by their forwards, namely Louw and Cooper.

The first overtime period ended with nothing to show for by either side, but UMass looked to have the advantage. They were overpowering Lock Haven’s defense with shot after shot from Cooper, Antonet Louw, Georgie McTear and others. The only thing going for the Bald Eagles was a trio of tremendous saves by LHU goalkeeper Brianna DeAngelis to send the game to a second overtime period.

“I think in overtime, it’s about really digging deep because your legs are so tired,” coach Barb Weinberg said.

In particular, Weinberg credited Louw for that perseverance late in the game.

“You could just see it in her eyes,” Weinberg said. “She was going to take the ball and try to win something in our attacking third.”

Louw, who had already scored two of her team’s three goals, hit the open field with speed during UMass’s man advantage gained at 2:44 into the period. She flew into the opposing circle with some nifty stickwork that enabled her to side step one defender to the left, spin around a second, and drop the ball off to Lucy Cooper, who put in the game-winner in the 84th minute.

“Clodagh gave a good ball from the inside of the field to the outside,” recalled Louw. “I received the ball, beat two players and saw Lucy wide open.”

The Minutewomen sprinted out of their seats to celebrate with teammates on the field.

UMass will travel to Cambridge, Massachusetts this Sunday to take on #18 Harvard, taking a break from A-10 play.

Justin Ekstrom can be reached at [email protected] and followed on Twitter @JustinJEkstrom.