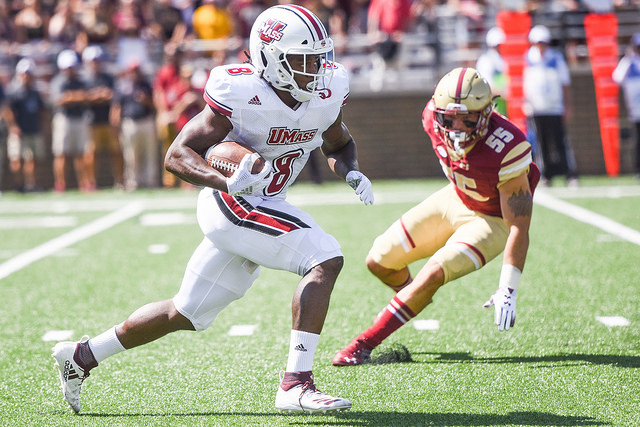 The BC (1-0) offense ran rampant over UMass (1-1) all game, accumulating 622 total yards of offense, the most ever under head coach Steve Addazio. The Minutemen meanwhile, only gained 315 total yards.

“We weren’t as good as everybody thought we were last week and we’re not as bad as they think this week,” coach Mark Whipple said. “(We) just had some miscommunication problems on defense. Busted coverage really hurt us.”

AJ Dillon and Anthony Brown combined as the Eagles’ dynamic duo at Alumni Stadium, contributing to four of the six BC touchdowns in the first half.

“Giving up an easy one, I thought it gave Anthony Brown a lot of confidence,” Whipple added. “The ball bounced good for them and sometimes that happens.”

Senior running back Marquis Young had the two biggest plays for UMass on the afternoon, scoring the only rushing touchdown for the Minutemen and also returning a kickoff 73 yards.

After that, quarterbacks Andrew Ford and Ross Comis couldn’t generate much with just one touchdown throw between them. Senior wide receiver Andy Isabella topped the charts with 95 receiving yards on four receptions.

“I told them, I know this team, I’ve been around them,” Whipple said. “This game wasn’t going to make the season or break it, it’s how you handle it”

Dillon got the scoring started on the Eagles’ very first drive, finding the end zone on a 15-yard throw from Brown.

UMass tied the score on its second drive of the game on a three-yard run from Young. Shortly after though, BC answered on a 34-yard pass from Brown to Kobay White, setting up the first of seven straight touchdowns for the Eagles.

Running back Davon Jones accounted for the next two BC scores, rushing in two short runs into the end zone, making it 28-7.

About five minutes later, BC tight end Ray Marten was the beneficiary of the Minutemen’s blown defensive coverage as he received a perfect pass from Brown and took it 33 yards to score.

Before the first half was out, the Eagles struck twice more, once on a 27-yard catch from White and the other on a 59-yard interception return from Lukas Denis, upping the score to 48-7.

“We’ve played big teams like this before,” Bryton Barr said. “Definitely much bigger, much faster than Duquesne but we just need to get this one out of the way and we got it out of the way early in the season.”

BC added one more touchdown early in the fourth quarter on a David Bailey rush, bringing the score to 55-7.

UMass ended the Eagles’ scoring run when Comis hit Jordan Fredericks with a 16-yard touchdown pass late in the fourth quarter. Michael Curtis added a rushing touchdown of his own before the final buzzer sounded.

“They were playing hard,” Comis said. “They came out ready to go and a couple mistakes, a couple breaks that we got here and there and we couldn’t capitalize, I think that kind of deflated us. They built momentum off those things and they just kept putting points on the board.”