The Minutemen have surrendered 39.6 points per game 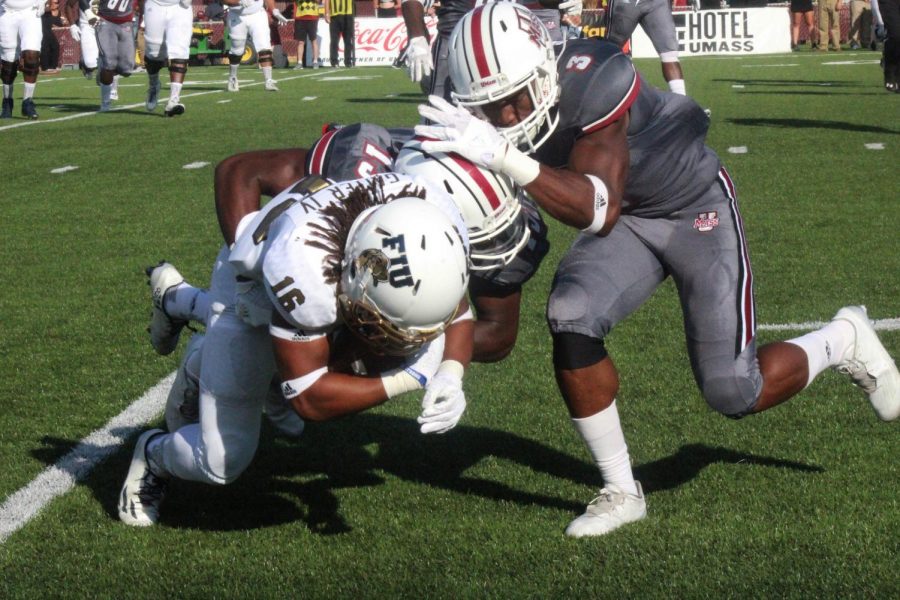 When the Massachusetts football team squared off with Ohio a season ago, both teams combined for 108 points in a shootout that saw the Bobcats come away victorious.

Based on the way the two teams have played this season, another high-flying offensive affair may occur Saturday in Athens. UMass (2-3) has surrendered 39.6 points per game, while Ohio (1-2) has given up 37. Both defenses have struggled to get stops, and Saturday’s game will be decided by which teams defense can get off the field.

For the Minutemen, getting stops defensively relies on everybody knowing and executing their assignments.

Last week against Charlotte was the first time all season UMass has had its full arsenal of weapons in the secondary, with Brice McAllister and Tyler Hayes at safety and Isaiah Rodgers and Moses at corner.

The group was supposed to be one of the stronger units for the Minutemen entering the season with McAllister transferring from Connecticut, and will be needed to keep the Bobcat offense at bay.

“For me, Tyler and Isaiah, it’s kind of like ‘bang, bang, bang’ and we’re good,” Moses said of the communication in the secondary. “Brice came in in the spring and he jumped right in and picked it up quickly. Once we’re all out there and we all see the offense and know what they’re doing, we know how to play.”

By stopping Ohio’s offense, it comes down to controlling quarterback Nathan Rourke. The 6-foot-2 signal-caller has been a menace for defenses, combined with his ability to run the ball, and Rourke gives the Bobcat offense another element to game plan for.

“He does it to everybody,” UMass coach Mark Whipple said. “He did it to Cincinnati last week who’s one of the top defenses in the country. He’s got eyes in the back of his head and makes plays in space. He has a really good feel for the game and is a guy that can scare you.”

In the secondary, McAllister knows that Rourke isn’t easy to bring down, and even when you think you have perfect coverage, he can extend the play to hurt you.

“He can keep the play alive,” McAllister said. “He’s very good at running, he has a good arm and he’s experienced. We have a game plan put in place to keep him under control and make the other guys beat us.”

While Rourke gets in done through the air, the Bobcats have a pair of running backs, A.J. Ouellette and Maleek Irons, who are capable of going for 100 yards any game. Ouellette averaged over 10 yards per carry when the two teams met last year.

With their plethora of weapons, it will be key for the Minutemen to get Ohio into third and long situations, then getting them off the field. The Bobcats have struggled on third down this year, converting just 33 percent of its tries.

While on paper it looks like a shootout, it will be on the UMass defense to shut down Rourke and keep the Ohio offense off the field to avoid another high scoring affair.