UMass looks to prove rankings wrong in A-10 opener vs. Duquesne

The Minutewomen were picked to finish 10th in Atlantic 10 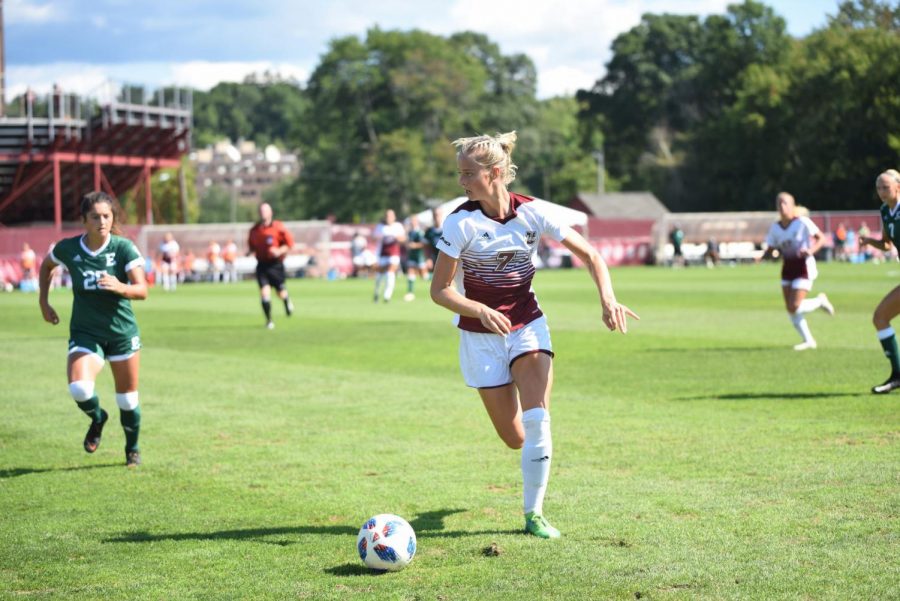 The Massachusetts women’s soccer team begins its Atlantic 10 play against Duquesne (4-3) at Rudd Field on Thursday.

The Minutewomen (5-2) enter the game riding a four-game win streak. Offensively, things are as good as they’ve been in a while.

“It’s extremely important [that the offense is clicking],” said forward Rebeca Frisk. “Our confidence is extremely high but it’s definitely not something where we’re in over our heads. We’re not getting complacent. We still have a lot to learn. I think it’s good that our first game is on Rudd because we’ve been having quite a streak there.”

Frisk is just one of a plethora of UMass players who are enjoying a strong start to their season.

Frisk ranks first in the A-10 in points with 14 while teammates Erin Doster and Lauren Bonavita are tied for second place with 12. Frisk also leads the conference in goals with six while Bonavita ranks fourth with five goals.

After Monday’s practice, UMass coach Jason Dowiak talked about why this offense has been so good.

“I think the ideas that we’re trying to work on in practice with how we share the ball and the creative opportunity that we’re trying to instill in them are just clicking,” Dowiak said. “The goals are coming because it’s not just the individual player that’s getting on the other end of the ball. The movement off the ball is on a whole new level.”

Duquesne’s goaltender Kyra Murphy comes in to Thursday’s game ranking atop the A-10 in save percentage, allowing zero goals in three games. In seven games played, UMass goalie Peyton Ryan ranks fourth in save percentage (.833) and third in goals-against average (0.64).

In the coaches’ preseason team rankings, Duquesne ranked third while UMass ranked 10th. The Minutewomen were not too pleased with that.

“They probably don’t respect us, just from looking at preseason rankings,” said Doster. “We’re just going to out-work and out-hustle them.”

Frisk continued the trend of wanting to prove the preseason rankings wrong.

“Teams change every year,” Frisk said. “We were ranked 10th in the beginning for everything and Duquesne was ranked third. Look how we’re doing. It’s a new year; everyone’s going to be different. We’re going to stick to our game plan.”

Regarding the game plan, Dowiak gave his thoughts on what they must do to stop Duquesne on Thursday.

“Duquesne is really athletic,” he said. “They press teams and they seem to be quite fast. We want to use their momentum against them to play around them. I do think we need to be a bit more direct at times to take advantage of the space they will have behind them.”

Even though it’s only the first A-10 game of the year, the Minutewomen are all-in on this game having a bigger impact as the season progresses.

“I just think that first game is such a statement to the entire conference,” said Doster. “If we can come out and have a really great game, a lot of eyes will be on us.”

Dowiak went on to echo that sentiment.

“It’s the only important game,” said Dowiak. “If we get this win, I feel like it’ll trigger the confidence to go to an even higher level. They were picked third in the league so I think it would be a great statement for us to get a win over a team that was picked higher than us by the coaches.”

Kickoff is set for 4 p.m. in Amherst.