Despite repeated late-game pressure, UMass failed to capitalize on opportunities 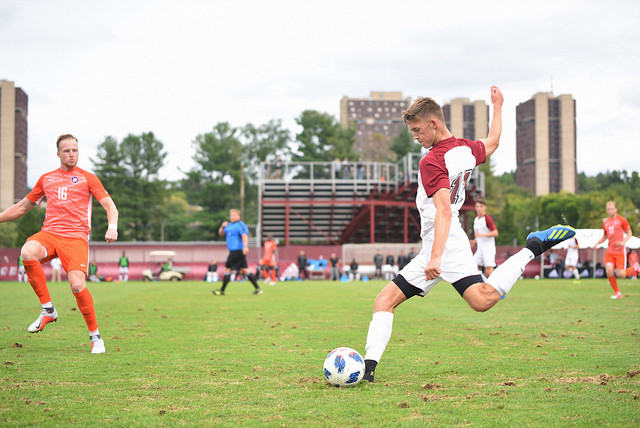 Despite having the ball in play for 110 minutes, neither the Clemson nor Massachusetts men’s soccer teams could squeak a goal through, and the teams departed UMass’ Rudd Field on Saturday following an energetic but scoreless tie.

For the Minutemen (2-2-2), the game was an opportunity to test themselves against a formidable opponent who has floated near the NCAA Top 25 rankings early this season. Despite not getting a win, it was a successful day for UMass.

“One of the top teams in the country, without a shadow of doubt, they’re a terrifically well coached team, chock-full of talent,” UMass head coach O’Leary said of the Tigers. “We’ve come in and we’ve stood up to them today.”

UMass struggled to keep pace with the Tigers’ offense early in the game, and by halftime, the Minutemen had still failed to register a shot or earn a corner kick. Clemson, by comparison, had nine first half shots and took five corners.

Despite the offensive pressure, the UMass defense – a consistent line of Casey Hamill, Brandon Merklin, Ryan Saul, and Dylan Cranmer – bent but didn’t break. All but one of the Tigers’ nine first-half shots were off target or deflected, including a 16th minute set piece off a corner kick that brought the ball to the top of the box before a back-post run and header sent the ball over the bar.

This was one of a series of close calls for UMass, which was forced back for much of the first half by high pressure from the Tigers. A low ball toward redshirt freshman keeper Trey Miller nearly broke the draw in the 37th minute. Miller – a transfer from Louisville – was slow to commit to rushing the ball and was left out of position when Clemson put a low cross back across the box. As was the case throughout the game, the Minutemen defense was there to handle the situation and preserve the tie.

With most of the team sitting low to deflect the Tiger attack, the Minutemen forwards struggled to create sequences and instead relied on more long balls and counterattacks.

The story was largely the same through 70 minutes, at which point the Minutemen, spurred by the added energy of substitutes, launched a series of gutsy attacks and began to push the Tigers back on their heels.

“We didn’t lie down, we kept working,” O’Leary said. “You put three, four minutes together and all of sudden you’re now in the ascendency.”

Forward Jack Fulton pointed to the Minutemen’s steady stream of subs as an essential element of the team’s success.

“Once one comes off, another with more energy comes back into the team,” Fulton said.

UMass refused to cede control for the final 15 minutes of regular time, even with Clemson launching repeated counterattacks. Fulton, who played all but five minutes of the game, was undeterred by a no-call in the box after he was dragged down and continued to command UMass’ aggressive late-game efforts.

“One of our strikers tucked back in as a defensive mid, which gave us a little bit more of winning the second ball,” Fulton said. “Once we were in the second ball, we ended up getting the through passes and then we kept going forward from there.”

But despite the Minutemen’s added pressure, the game remained scoreless after 90 minutes, thus warranting two sudden death extra time periods before a tie could be declared.

Both teams launched strong attacks in the first 10-minute extra time period, with UMass holding strong in the middle of the field and pushing the Tigers to the wings with hopes of landing a cross. The Minuteman defense deflected several strong Clemson efforts, and the game remained knotted at the end of the first extra time session.

UMass’ best opportunity of the game took place just after kickoff of the second extra time period. Freshman James McPherson, playing forward, took a through ball from Fulton, split two Tiger defenders, and found himself one-on-one with Clemson goalie George Marks. McPherson put a low ball to Marks’ left, which the Tiger keeper barely landed a finger on, sending it wide of the net.

Final efforts were unsuccessful, with Minuteman midfielder Yosuke Hanya playing a ball too early to Fulton, who hadn’t yet beaten a Clemson defender. The Tigers nearly stole the show in the final minute, with a low cross deflected just wide right of the post.

“The draw was very good for us, because Clemson are a good side,” said Fulton.

“A little unfortunate in overtime, we had a couple of chances, we could have nicked a win,” O’Leary added.

The Minutemen will be back in action Wednesday night, when they travel south to play currently winless Hartford.