Minutemen enter as defending A-10 champs 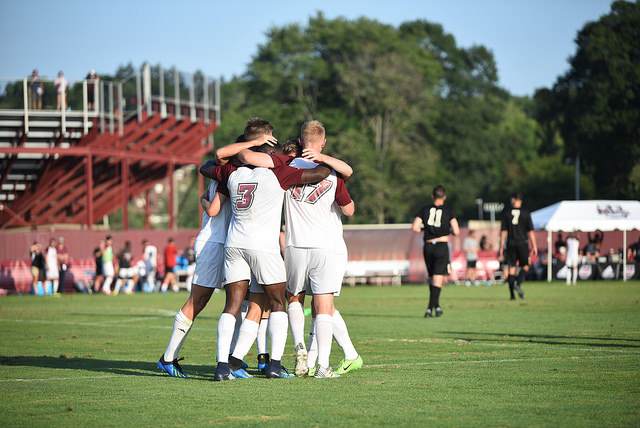 For the first time in a long time, the Massachusetts men’s soccer team is bearing the weight of expectations.

Entering 2018 as the defending Atlantic 10 champions for the first time in a decade, the Minutemen are trying to build on last year’s banner season with plenty of new faces.

“We just want to come out of the season feeling we’ve given everything and we’ve gotten better,” UMass coach Fran O’Leary said. “So, we realize it’s going to be challenging in many ways, we’re not going to sneak up on anybody anymore. Teams will look to bring their best game against us, that’s part of life when you win a couple of trophies. The key for us is to come in and maintain the camaraderie, the team spirit, the work ethic that we’ve had here. That’s going to be so important as we move forward in the season.”

Sophomore Davis Smith will earn all the headlines in the early going, having been named to the MAC Hermann watch list — the second Minuteman ever to make the list and the first since 2010 — returning as an All-Conference First Team selection and last year’s leading scorer, bagging 10 goals and adding seven assists up front.

With the entire back four returning — Casey Hamill and Dylan Cranmer will start at left and right fullback, respectively, while All-Conference center backs Konrad Gorich and Brandon Merklin start between them — O’Leary has only his midfield to sort out.

The graduations of Alex DeSantis and Connor O’Dwyer leave a big hole in the center of midfield, and the departures of Matthew Mooney and Henry Steinkamp leave question marks on the wings as well. O’Leary has plenty of options: Chandler O’Dwyer, Connor’s younger brother, has seen plenty of playing time through the middle, as have Graham Brenner and Stephen Ravazzoli, the three of whom started in the center in the season opener.

Jack Fulton, who saw most of his time alongside Smith up front last season, has often dropped back into an attacking midfield role. James McPherson is also contending for playing time, having starred in a 3-0 win over Bryant on Monday with a goal and two assists in the span of less than 10 minutes.

“There are chances for everybody,” O’Leary said. “No one in particular. Most of the conversations we have occur on the field. Players talk to me through their actions. We were fortunate enough to have a group of guys here who overachieved and let their play do the talking. So what will emerge in the early games is, we’re looking for the returning players and the new players to perform on the field and really speak to me and demand playing time.”

Having stayed fairly consistent with a 4-4-2 formation last season, O’Leary has experimented more this season — he opened the preseason against Boston College in a 4-4-2 but moved to a 4-5-1 at times, and lined up with three central midfielders in a 4-3-3 against UMass Lowell.

“Well we’re just looking to find out what suits our team,” he said. “We’ve got a lot of returning players and a lot of new players, so we’re trying to work out who is best suited to particular positions. We won’t be married to a certain formation, but we’ll put players where they feel comfortable and have a chance to succeed.”

Merklin, Gorich, Hamill and Kevin Boino will don the captains’ armbands this season as an all-senior leadership group, one O’Leary has full confidence in with a few weeks of play already settled.

“So far so good,” O’Leary said. “We lost a lot of maturity and intelligence, and all early indications are that this group, not just the captains but the seniors and returners are going to be great role models for the newcomers. So as of now, we’re very, very pleased with what we’re getting in terms of leadership.”

Expectations are high in Amherst — after being ranked 11th, 10th and eighth in the last three A-10 Preseason Poll, the defending champion Minutemen were pegged to finish third, just below Fordham and Virginia Commonwealth.

“It can either give you a lot of confidence or it can breed complacency,” O’Leary said. “The returning guys haven’t looked complacent, and I’m hoping the extra bit of confidence that winning brings will translate and help us get over the line in close games this fall.”

Already 2-1-1 on the year, UMass is poised for another big year, if not as magical as last year’s run to the NCAA tournament and two pieces of silverware to boot. It’ll be a competitive team and a very strong defensive side with great veteran leadership.

If the midfield comes together and the transition from defending to attacking improves, the Minutemen could be contenders in St. Louis when the A-10 tournament rolls around in November.