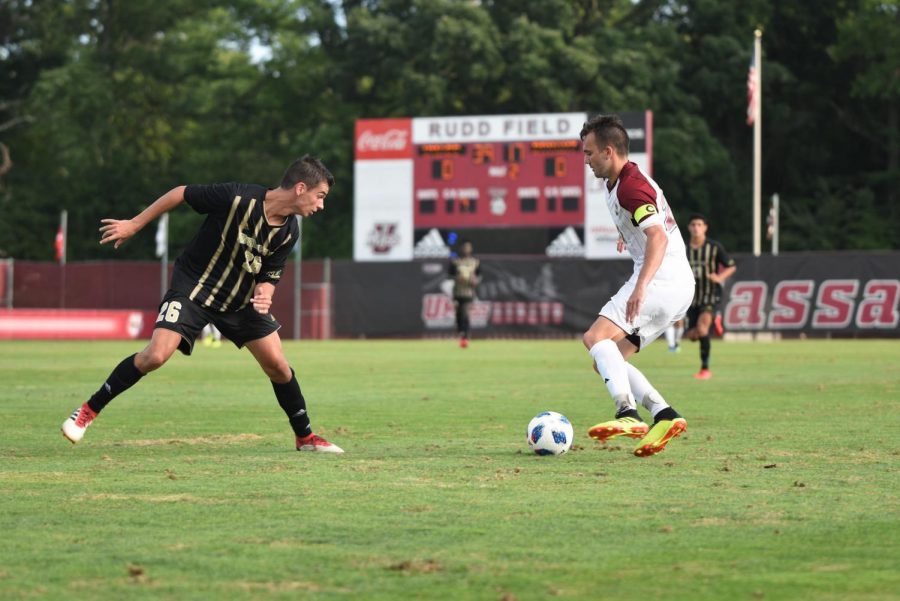 Freshman James McPherson scored a goal and assisted two more, combining with senior DeAndrae Brown (two goals) to push the Minutemen (2-1-1) over a Bryant (0-4-0) team still looking for its first victory of the season.

“It was a hard game,” UMass coach Fran O’Leary said. “Bryant gave us a hard game. We struggled in the first half and into the second half, but guys like Christian [Labeck], DeAndrae [Brown] and James [McPherson] came in off the bench and gave us the energy to pull out the win.”

The Minutemen struggled for the majority of the game in a tough back and forth contest, before finally breaking through as Brown scored a goal facilitated by McPherson in the 74th minute to give UMass a 1-0 lead.

Brown’s goal opened the floodgates for UMass, as it would go on to dominate the rest of the contest.

It took UMass only three minutes to put a second goal in the books, as McPherson scored his first career goal for UMass, blasting a deflected ball past Bryant goalkeeper Olivier Larente to bring the UMass lead to 2-0.

Brown would seal it for UMass another three minutes later, putting away a ball from McPherson to give UMass a 3-0 victory, a result that held until the final whistle.

After a small and inconsistent stretch of minutes to begin the season, McPherson capitalized on his 28 minutes, taking part in all three goals for the Minutemen.

“Great outing [for McPherson],” O’Leary said. “Over the course of the preseason he improved and made the most of his opportunities. He earned himself some minutes today.”

“James played unbelievable,” said Brown. “Especially for a freshman playing his first year of college soccer, it’s actually really impressive. I talked to him a lot, telling him to be ready for his chance and today it came and he played fantastic. I’m so proud of him.”

Brown also put forth a fantastic performance, scoring a brace and sparking a fire that did not cool off for UMass until the final whistle sounded.

“[Brown] has been terrific,” O’Leary said. “He’s come in, he’s been a breath of fresh air, he’s done a fantastic job.”

“It feels really good to be able to come off the bench and contribute to the team,” Brown said  “The guys helped me keep my mind right and when I got into the game, it gave me energy.”

It was an impressive performance for the Minutemen, as they managed to get a favorable result after struggling through 70 minutes of tough and gritty play, The defense, led by senior defender Brandon Merklin, managed to pull through extremely warm weather to keep a clean sheet for UMass in the victory.

“We just kept our energy up,” Merklin said. “We kept each other focused. We just kept going.”

The victory makes two in a row for UMass, which look to add to Monday’s performance and continue riding the momentum, traveling to face Boston University at Nickerson Field on Friday at 7 p.m.