The team hopes to make it to nationals in Philadelphia 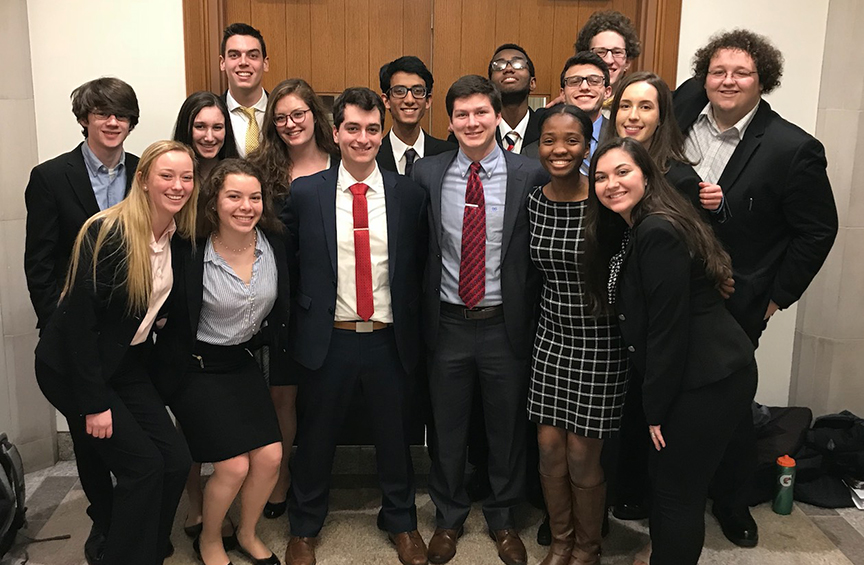 The University of Massachusetts Mock Trial team is looking to do more than just public speaking and debating this upcoming season: they are looking to make it to the American Mock Trial Association’s National Championship Tournament at Elizabethtown College in Philadelphia in April.

Each year, AMTA produces a fictional case that every participating mock trial team in the country uses. The teams then compete in tournaments against other schools, trying the case as both the plaintiff and the defense. Each team prepares opening statements, closing statements, directs, cross examinations and witnesses.

Each year, the fictional cases rotate between criminal and civil cases, with this year’s case being civil.

The UMass team’s first step is hosting try-outs and filling up their three teams. As of Sept. 10, over 50 people had signed up to try out. All members, except members of the executive board (who act as team captains), must try-out every year. The team usually has 20-25 active members who are assigned to one of the three stacked teams.

“We take anyone based on if they come in and show they… understand the rules and everything and if they have good presentation skills,” said team president Nicole Rabovsky. “As long as they come in and act well and understand how to apply the facts to the situation, we’ll take them.”

Witnesses trying out will read a provided affidavit and answer questions the e-board ask as attorneys. The witness will also give a monologue based on that character’s affidavit.

Once team members are accepted, a pre-stacked tournament is hosted and the e-board sees how people do in a trial setting. From there, eight to 10 members are placed in a team.

“We look to get people who haven’t done it before, freshmen, people who haven’t even heard of mock trial,” Vice President Koray Rosati said. He explained they try to make it fair for everyone, whether they have experience or not.

There are three levels of the AMTA competition. There is the regional level, where every team is invited to compete. For this competition, UMAMT usually travels to Yale University or Boston College. If a team does well enough at the regional level, they advance to the Opening Round Championships in March. For the UMass team, it would be in New York. If the team does well enough there, they move on to Nationals, which take place in Philadelphia, Pennsylvania this year.

Rabovsky hopes they can make it to Nationals this year. Two years ago, UMAMT made it to ORCS. However, last year they didn’t make it past the regional competition.

“We had a lot of freshmen on the team last year because we added the third team. So it was like a rebuilding year. But, this year we have a lot of stuff planned to help us get to Nationals,” said the junior management and legal studies double major.

Sophomore Milo Cason-Snow, a computer science major and member of last year’s team, said he believes a key to success is preparing for every scenario each trial could provide.

“A big thing is anticipating the types of arguments you’re going to have to make, but also be prepared to make arguments you are not expecting,” Cason-Snow said. Another big part of mock trial is knowing the rules and knowing the facts of the case, he explained.

Rosati also believes a key to success is debating within the team when preparing for trial in order to further explore the case. Small details can be overlooked or ignored, but when those details are understood and used in cases, the team can score higher in competitions.

Each trial during the competitions is scored by two “judges,” who are usually lawyers, but are occasionally actual judges or law students. Over the course of the four trials during a competition, the team is given eight scores, with the best possible record being eight wins and zero losses.

For tournaments against other schools, the team hopes to travel to the University of Maryland, United States Coast Guard Academy, Brandeis University, University of Pennsylvania, Yale University and possibly Cornell University.

UMAMT is also hosting their own tournament this year during the first weekend back from winter break. Rabovsky said about 20 schools have already signed up to attend, including schools from all over New England, a school from Texas and possibly a school from Alabama.

The team hasn’t been able to host a tournament for the past few years because not enough teams signed up to participate, so the UMAMT is excited.

Rabovsky participated in her high school’s mock trial team and was interested in law from television shows like “Suits.” She was also involved with theater in high school and thought this would be a great way to combine her two interests.

“I really enjoy the whole experience all together because I like working with the different people that we get,” Rabovsky said. She enjoys the “family bonding experience” created by spending time with people during car rides, getting meals and working closely with them.

Rosati, a finance and sport management double major, was also involved with his high school’s team and similarly enjoyed “Suits.”

“One of the best parts is the family aspect of it because we stay in hotels for a weekend all together,” Rosati said. He enjoys the night before the trial where everyone is in the same room, preparing, memorizing everything they can for the trial.

The team was founded in 2007 by two undergraduate students. The length of the team’s season is contingent upon how far the team makes it in competitions held by the American Mock Trial Association.  The team meets from 7 to 9 p.m. on Tuesdays and Thursdays.